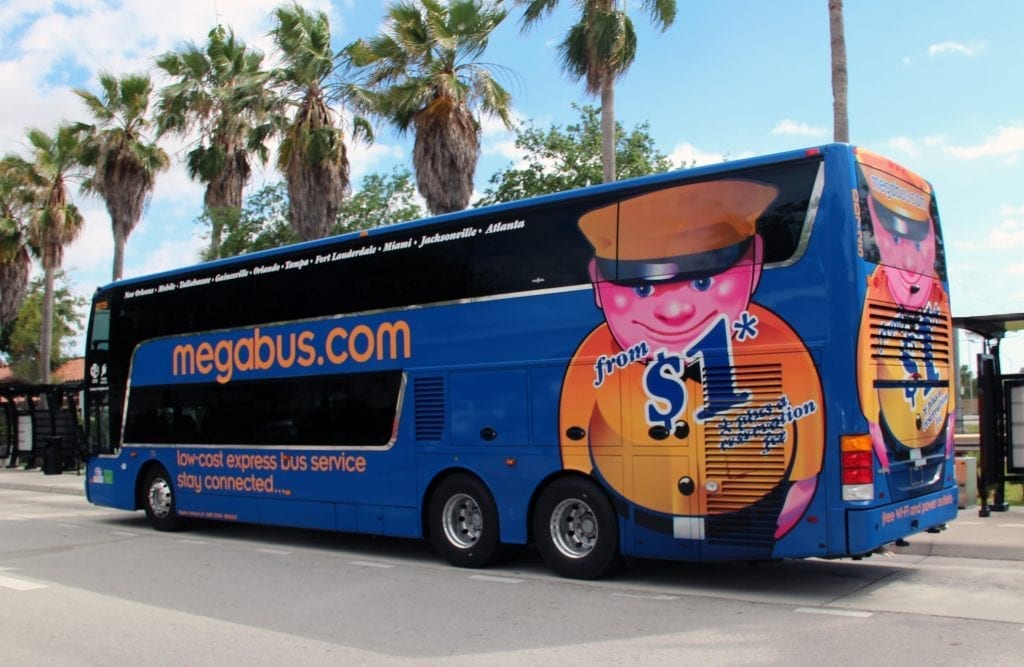 Megabus.com, the popular city-to-city, express bus company with fares from $1, has expanded within Florida to include services to/from Fort Lauderdale/Hollywood. Service begins today and tickets can be purchased at www.megabus.com.

For as low as $1, plus a reservation fee, Fort Lauderdale/Hollywood residents are now able to travel express to and from Orlando and Tampa on seven daily arrivals and departures from the Fort Lauderdale/Hollywood megabus.com arrival/departure location at the Sheridan Street Station, 2900 Sheridan St. in Hollywood, Florida. The Sheridan Street Station offers convenient connections to the Tri-Rail Shuttle and Broward County Transit systems. On-site parking is available; however overnight parking is not permitted.

One-way fares always start at $1 on every bus, every day.

Megabus.com’s expansion to Fort Lauderdale/Hollywood will make it possible for more than 165,000 travelers to visit the area during the first year of service, with an economic impact of more than $13 million annually.

Fort Lauderdale/Hollywood marks the fourth Florida city megabus.com has begun servicing in the last three months. On May 15, service began to/from Miami, Tampa and Tallahassee, in addition to expanded service from Orlando to Mobile and New Orleans. Megabus.com daily express service is now available between seven Florida cities (Fort Lauderdale/Hollywood, Gainesville, Jacksonville, Miami, Orlando, Tallahassee and Tampa) with direct routes to major cities in Georgia, Alabama and Louisiana with connections across the country.  Visit www.megabus.com – in Spanish & English language – for additional information about the service, schedules, arrival and departure times and fares.

“Megabus.com has rapidly become the travel option of choice for more than 35 million people and we’re excited to now bring our unique travel experience to residents of Fort Lauderdale/Hollywood,” said Mike Alvich, VP of Marketing and Public Relations for megabus.com/Coach USA. “This expansion provides Miami/Fort Lauderdale residents the convenience of an additional arrival/departure location in and out of the metro area.”

Studies by the Chaddick Institute for Metropolitan Development of DePaul University in 2014 revealed that city-to-city express bus transportation remains the fastest-growing and most affordable transportation mode. The university’s studies reveal that city-to-city express bus carriers like megabus.com save customers nearly $300/trip when compared to single-occupant driving and between 50-80 percent per trip when compared to train and air travel. City-to-city bus service cumulatively saves American consumers $1.2 billion annually compared to other modes of travel.

“Customers can travel to these popular destinations in approximately the same amount of time it would take to drive themselves, without the stress of being behind the wheel,” added Alvich. “They can recline, rest and even sleep, or, if they prefer, keep themselves connected and entertained with free Wi-Fi and power outlets in every seat on our state-of-the-art double-decker buses.”

Fares start as low as $1 every day and increase gradually as the traveling date gets closer. Customers are encouraged to book early to secure $1 fares. “The $1
fares go quickly, but there are many other great fares available if you book early,” said Alvich. “Traveling on Tuesdays, Wednesdays and Saturdays is another great way Fort Lauderdale/Hollywood customers can secure the best megabus.com fares.”

Megabus.com, a subsidiary of Coach USA, launched in April 2006 and is one of the largest city-to-city express bus service providers in North America. In addition to affordable fares, megabus.com offers customers state-of-the-art, green-certified double-decker buses with free Wi-Fi, restrooms and are wheelchair accessible. Megabus.com has equipped every bus purchased since 2006 with three-point lap/shoulder seat belts, providing the top safety standard for megabus.com’s 35 million passengers in more than 120 cities across North America.

Since its launch on April 10, 2006, megabus.com has served more than 35 million customers.

Service for megabus.com operates daily. Fares shown are one-way and include all government taxes.