Hollywood to expand mobility for beachgoers with four additional Mobi-Mats 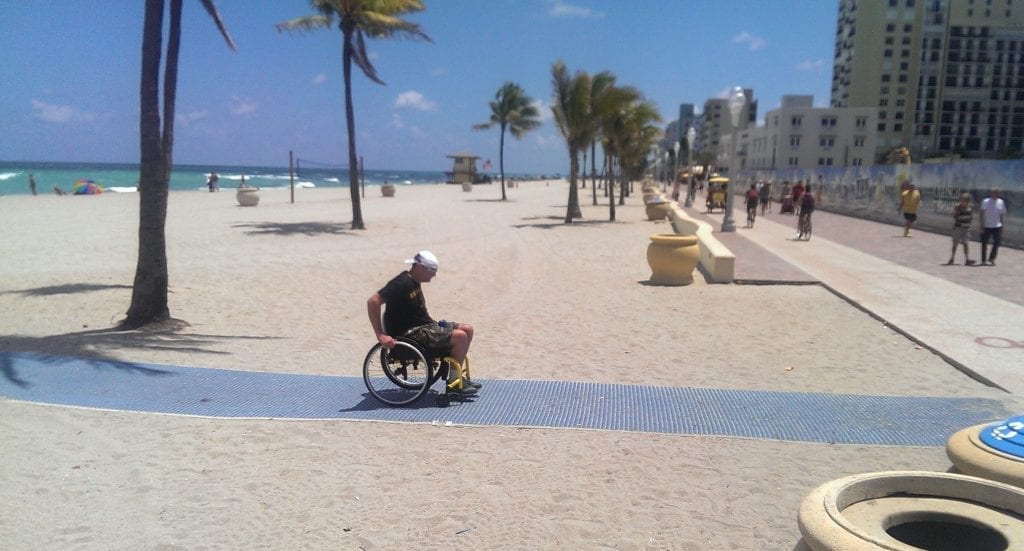 The City of Hollywood is paving the way for greater access for beachgoers traveling by wheelchair or stroller with the addition of four new Mobi-Mats, semi-permanent blue plastic pathways that lead toward the Atlantic Ocean.

Hollywood was a pioneer in the state of Florida in February 2009, installing four 6-foot-wide ADA-compliant Mobi-Mats of varying lengths within the city’s Central Business District at Connecticut Street, Johnson Street, New York Street and Tyler Street.

The mats have been such a success with wheelchair users, parents pushing strollers and barefoot beachgoers seeking relief from the hot sand that four additional mats are being installed at Keating Park at Magnolia Street and at Oregon Street, Harrison Street and Carolina Street near the Hollywood Beach Marriott.

The City of Hollywood was among the first in Florida to obtain authorization from the Department of Environmental Protection (DEP) to install its first four beach accessways. The lightweight Mobi-Mat material was selected for its easy installation, fast removal prior to a storm event, reliable traction and cost-effectiveness.

The mats, which are funded by the City of Hollywood Community Redevelopment Agency (CRA) and supplied by Coastal System, require a Coastal Construction Control Line permit and must be determined to pose no threat to sea turtles during the turtle-nesting season.

“I think the Mobi-Mats are a practical and minimally intrusive way to accommodate beach access for all users with a measure that does not impact marine turtle nesting,” said Jorge Camejo, Executive Director of the CRA.

Three of the new Mobi-Mat locations – Keating Park, Harrison Street and Carolina Street – are at stops along the City’s ADA-accessible Hollywood Trolley, with Keating Park also offering ADA-compliant restrooms, making a beach excursion more convenient for all visitors, whether they travel on wheels or on foot.

Designed to improve mo
bility, ease parking demand and traffic congestion, and enhance the overall visitor experience, the trolley is $1 per person per ride and free for children ages 5 and younger. It departs approximately every 30 minutes from more than a dozen beach and downtown locations, and operates from 10 a.m. to 10 p.m. Wednesday, Thursday and Sunday, and from 10 a.m. to 11 p.m. Friday and Saturday. More information is available at www.visithollywoodfl.org/trolley.

“It’s exciting that we have four mats and are getting double that, and are also expanding the coverage area to accommodate residents and visitors in multiple areas of the city,” said Kimberly Stefanski, Planning and Economic Development Coordinator for the CRA.

For more information on Hollywood’s Beach and Downtown districts, call the Hollywood Community Redevelopment Agency (CRA) at 954-924-2980 or visit www.hollywoodcra.org.