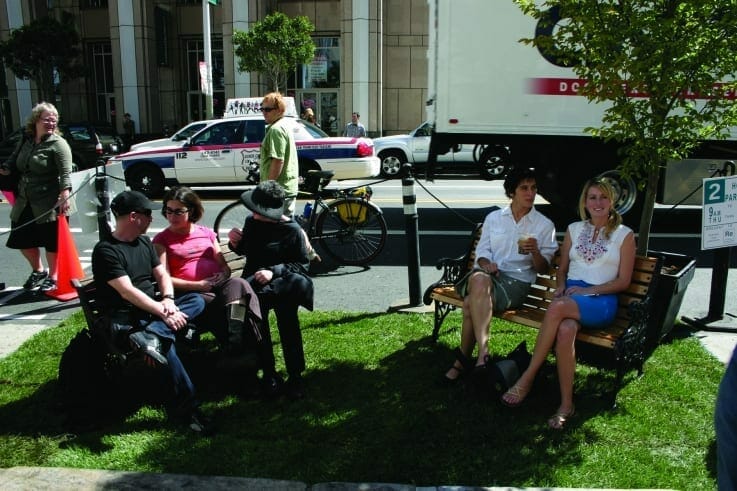 The local PARK(ing) Day event will take place at all four corners of the intersection of Taylor Street and North 21st Avenue, on the east side of the Dixie Highway railroad tracks. It will feature benches, artificial turf, tents, art and music programming, refreshments and a popup train station for visitors to visualize the proposed passenger rail in Downtown Hollywood.

PARK(ing) Day was created in 2005 by art and design studio Rebar in a single metered parking spot in an area of downtown San Francisco that the city had designated as lacking public open space. That two-hour installation ultimately evolved into a global movement after a photo of the temporary public park – complete with sod, a bench and a tree – circulated the Internet.

After receiving requests to create the PARK(ing) project in other cities, Rebar designed a how-to manual to empower people to create their own parks to challenge existing notions of public urban space and help redefine space to suit specific community needs.

“We hope our PARK(ing) Day event in Hollywood encourages people to rethink how they view urban public spaces and get involved in discussions for creating distinctive places for people to gather that encourage them to get out of their cars and experience their surroundings,” said Jorge Camejo, Executive Director of the Hollywood Community Redevelopment Agency (CRA).

PARK(ing) Day has grown from that single temporary park created in 2005 to 975 parks in 162 cities in 35 countries, as of the last official count in 2011. PARK(ing) Day, which takes place on the third Friday in September, is intended to promote creativity, civic engagement, critical thinking, unscripted social interactions, generosity and play. The PARK(ing) Day concept has been expanded in recent years to address a variety of social issues, including the planting of temporary urban farms and the building of free health clinics.

The Hollywood CRA is collaborating on the downtown PARK(ing) Day event with City departments, area businesses and Barry University, which has a satellite campus at 421 N. 21st Ave., between Taylor and Fillmore streets. Sponsors are also being sought to provide benches and refreshments.

For additional information on PARK(ing) Day in Downtown Hollywood or sponsorship opportunities, email Kimberly Stefanski, Planning and Economic Development Coordinator for the CRA, at [email protected] To learn more about the global annual event, visit www.parkingday.org

PARK(ing) Day is an annual event that occurs on the third Friday in September.

Park(ing) Day is a citizen-powered, worldwide event, and people of all stripes from all over the planet participate every year. The event has become a tool for artists, activists and “ordinary” people of all ages to demonstrate what matters to them, engage their communities, and encourage play and have a little fun.