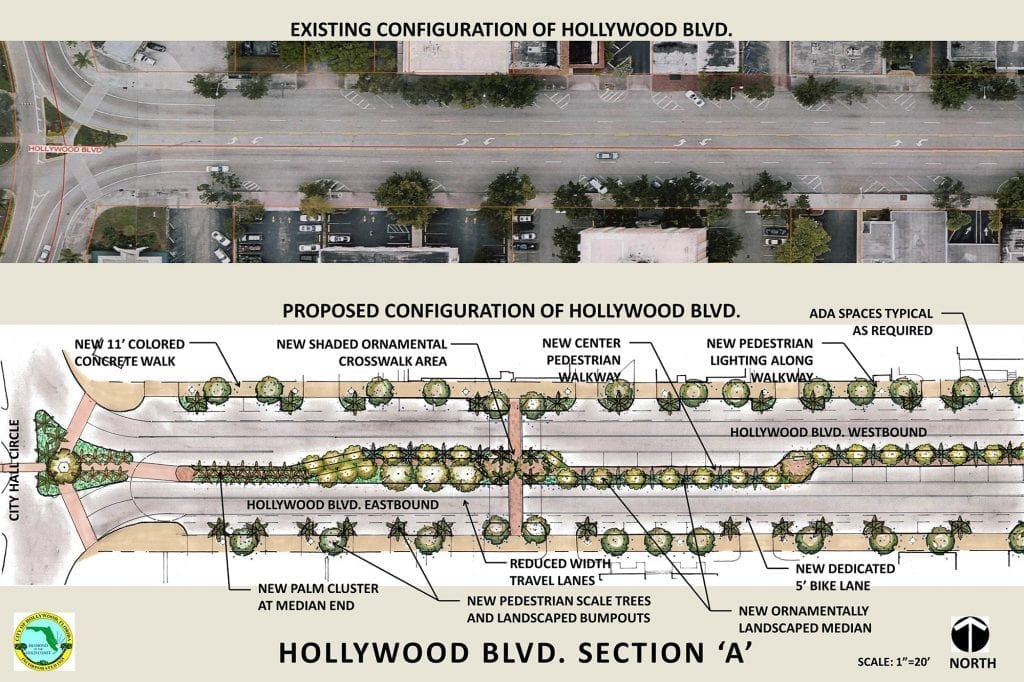 Major improvements are planned for the Hollywood Boulevard Roadway Corridor between City Hall Circle and Dixie Highway. This will be considered a Complete Street project.

During a recent meeting, the Hollywood Commission passed a resolution to approve development plans for the Corridor. Hollywood has received $6,800,000 in funding for the project in conjunction with the Broward Metropolitan Planning Organization. The City of Hollywood applied from a grant from the MPO and was awarded this grant. The City is expected to follow Complete Street guidelines in developing the project.

The work will include extensive new landscaping, new five-foot wide buffered bicycle lanes, clearly marked cross walks, pedestrian scale lighting, on street parking, and median islands. There will be ornamental plantings along the corridor including trees, palms, flowering shrubs and ground cover. There will be ornamental shade structures at crosswalks. The parking areas will changed from angled parking spaces to parallel parking spaces. There will be a reduction in the parking spaces from 192 spaces to 162 spaces. Some business owners have expressed concern about this reduction in spaces. However, during the meeting, it was pointed out that there are around 2,000 spaces behind businesses in that immediate area.

The Broward MPO will use this project as a model for other projects throughout the County.

According to the plan, construction will begin in 2016 and be complete by summer of 2017.

Commissioner Richard Blattner is excited about the planned development.  “This will be fantastic. This section of Hollywood Boulevard has not been improved. It has been a traffic and parking nightmare. It will be transformed in a positive way. It will be beautiful. It will give people who live in the nearby residential communities and own businesses in the area hope,” said Blattner.

Vice Mayor Patricia Asseff said she is very excited about the planned development of the corridor. “I really like the plan. They will work with all the stakeholder there and deal with the parking situation. The City will work the business owners to make sure the parking situation is taken care of and that we have good landscaping and lighting. We will get the alleys redone so businesses can receive deliveries more easily. Business owners and residents will have opportunity to have input and discussion about this new plan. It will be a walk-able neighborhood, a complete street.

The Hollywood commissioners were pleased with the plans for the corridor project. Mayor Peter Bober said, “I think it is fabulous. It will slow traffic down and it will beautify the roadway. The residents will be pleased with the results,” said Bober.

Additional Complete Street projects planned for Hollywood include the FEC Corridor Greenway from Pembroke Road to Sheridan Street, Johnson Street from the CI0 Canal to U.S. One and from 56th Avenue to 64th Avenue, Tyler Street from Young Circle to Dixie Highway, State Road Seven from Pembroke to Atlanta Street, AIA from Sheridan Street to Hollywood Boulevard and along South Federal Highway from Young Circle to Pembroke Road. Funding will have to be made available for these projects to be completed.