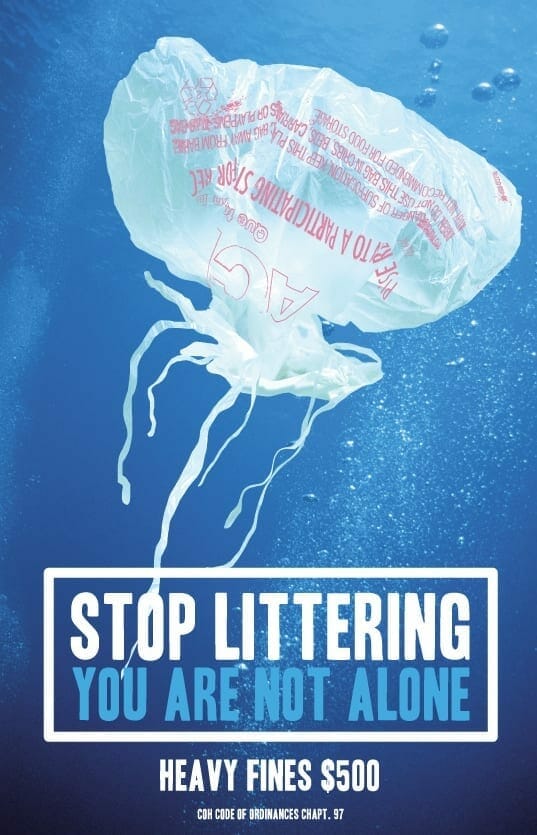 STOP LITTERING. YOU ARE NOT ALONE.
The Hollywood CRA’s Anti-Litter Campaign Is Catching On.

The multi-faceted Anti-Litter Campaign has garnered the attention and support of Hollywood’s residential and business communities. The Hollywood Beach Business Association (HBBA) is a great supporter of the cause and has committed to having employees wear buttons that read “Stop Littering -Because I Care.” In addition, the HBBA is dedicated to the campaign and complying with the City Code which prohibits disposables in the outdoor café areas.

The anti-litter campaign includes banners showcasing sea life made of litter with the headline, “Stop Littering  You are Not Alone”  and “$0 In The Can, $500 In The Sand” line the Broadwalk.  Large format signs with the same messaging greet visitors at the parking garage common areas and soon electrical box wraps at the Broadwalk street-ends will reiterate the same.

“It takes a community to make a difference. Hollywood Beach is truly a magical place to live, work and visit and as a business owner of over 20 years, here at the beach, who has seen this area grow and develop, it is with great pride that my restaurant partakes in such an important effort to inform people of the effects of littering,” remarked Debra Case, Owner of Ocean Alley Restaurant on Hollywood Beach Broadwalk and current HBBA President when asked about the campaign.

Since the campaign’s launch in June, Hollywood Beach has in fact been cleaning up. Public Works is out on the sand every morning with its rakes picking up debris and the City’s and CRA’s Beach Maintenance continue to pick up trash by hand left behind during the day, every day.

Residents are taking notice too. Ken Brown, owner of Gallery 2014 in Downtown Hollywood and avid beachgoer comments, “I think we need to recognize when the City takes the advice of citizens seriously and does the right thing.  The beach looks good.  It may still need some deep cleaning and incoming trash from the ocean will continue to be a battle, but I think we should recognize where the City does the right thing just as much as complain when they don’t.”

The Hollywood Community Redevelopment Agency has taken note that littering is a serious issue and is adamant about not letting offenders slide by. “There is too much at stake not to give this issue the attention it deserves and we are invested in the health and wellness of our ecosystem at Hollywood Beach, preserving its beauty, safety and vitality for all to enjoy,” comments Jorge Camejo, Executive Director of The Hollywood Community Redevelopment Agency.

The Anti-Litter Campaign is moving full steam ahead. Beach patrons are encouraged to become ambassadors by making sure that trash is disposed of properly. There are approximately 300 trash and recycling receptacles at Hollywood Beach leaving no excuse for litter.

A person commits the violation of offensive littering if he or she creates an objectionable stench or degrades the beauty and appearance of property or detracts from the natural cleanliness or safety of property by:

(A)   Discarding or depositing, or causing to be discarded or deposited, any litter upon the property of another or upon public property or any public way except in the manner permitted by law.

(B)   Permitting any litter to be so discarded or deposited from any business establishment or from any boat or vehicle of which he is the registered owner or operator, provided, however, that this division shall not apply to a person owning or operating a vehicle transporting passengers for hire subject to regulation by any governmental
entity, or any public school bus transporting children to and from the public schools.

(C)   Permitting the accumulation of litter on his/her property or the right-of-way abutting the property of which he/she is the tenant, or owner or operator.

For more information on events in Downtown Hollywood, or on Hollywood Beach, or on opening a business in the CRA districts, please contact the Hollywood Community Redevelopment Agency (CRA) at 954-924-2980 or visit www.hollywoodcra.org