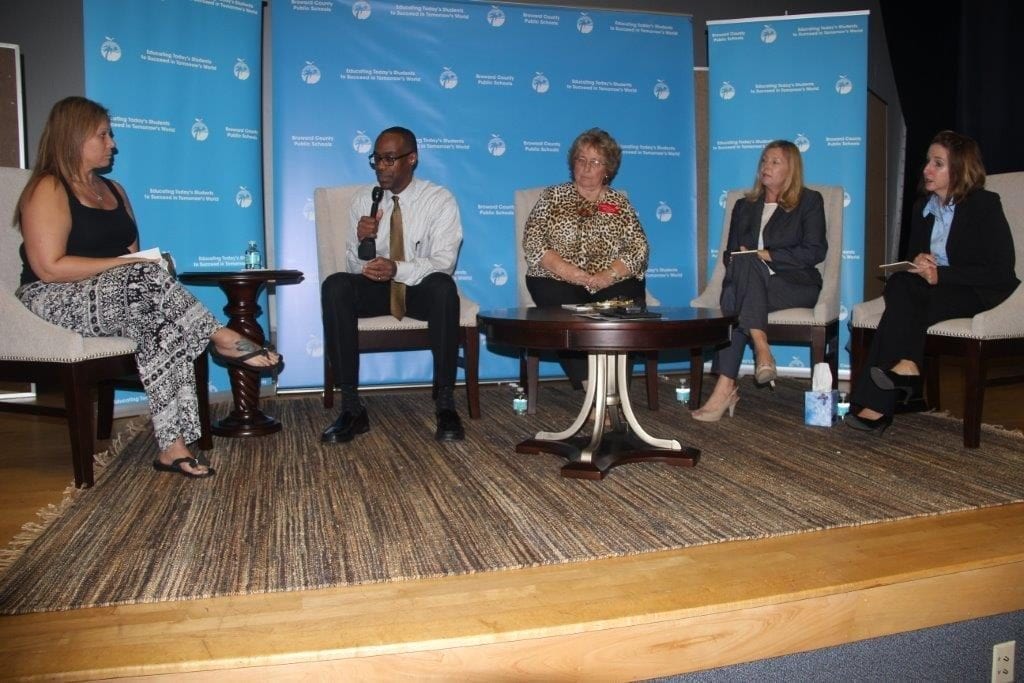 Kathy Oliva would like to see Hollywood Hills High School demolished and rebuilt.

“I used to tell my children that school is like a tool, you use it to help you get where you want to go in life. Now I believe the tool is broken. The school is in disrepair and we don’t have a home field for varsity football games,” said Oliva.

She was among a group of parents, students and employees who spoke at a Conversation with the District event at Hollywood Hills High School. It was hosted by Broward Public Schools Superintendent Robert Runcie.

Kathy’s son Kyle Oliva, a sophomore at Hollywood Hills spoke and said the bathrooms and football field need to be improved more books need to be available.

Her other son, Paul Oliva, a recent graduate spoke on a need for more books and a cleaner building.

Sharon Kieler, a mother with a daughter in the Hollywood Hills band said there is a need for more instruments and uniforms. “I am a member of the band boosters and we have to struggle for support,” she said.

Other parents spoke on the need for more programs for special needs programs and more opportunities for high achieving students.

Runcie is promoting an $800 million General Obligation Bond referendum that will appear on the November 4 ballot. During the meeting, Runcie spoke on the need to provide more computers to students. Right now the ration is one computer for five students. Because most tests and many assignments must be completed on computers, he wants to see this ratio reduced. Runcie is a proponent of the Digital Five program which allows elementary school students to have a personal computer. This program is in some schools and he wants it to be expanded.

During meeting, Runcie said if the bond is approved, most of the money will be spent in Hollywood schools. Much of the money would go toward infrastructure improvements and more technology.

And the District needs this money. Since 2008, funding for the District’s capital program has been reduced by nearly $2 billion. A data-driven needs assessment identified more than $3 billion in capital needs.

The District has developed an acronym, SMART which stands for Safety, Music & Art, Athletics, Renovation and Technology. The bond money would go toward those areas. Also, a Bond Oversight Committee will be established to ensure that the SMART initiative is transparent and that the District honors its commitments to the community.

The School District estimates that if the $800 bond is approved, average homeowners will be assessed on average about $50 more a year on their property taxes. Runcie said average is a home valued at about $225,000.