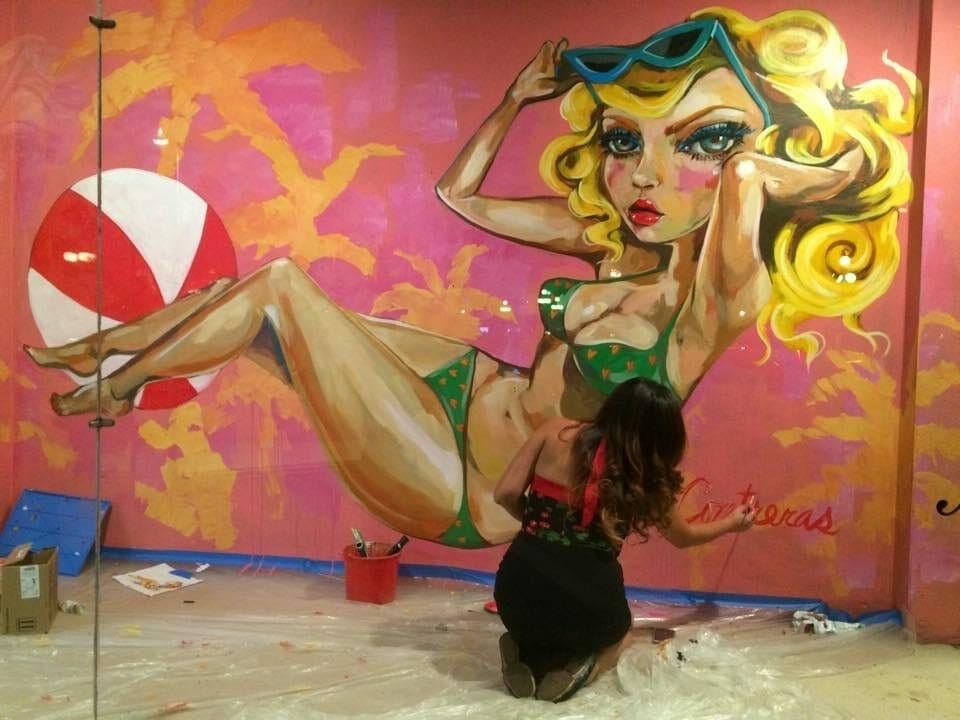 Melina’s Lingerie Shoppe, a landmark 70-year-old business in Downtown Hollywood known for the intimately attired and interestingly styled mannequins in its window displays, is sporting a cool new look as part of the Downtown Hollywood Mural Project (DHMP).

Miami artist Diana Contreras, aka Didi Rok, started lending her creative touch to the storefront window background in October, including a live painting event at Melina’s Lingerie Shoppe during the monthly ArtWalk event on Oct. 18.

The two murals, which are approximately 20 feet long and 8 feet high each and are visible from the sidewalk, depict two bikini-clad bathing beauties lounging on the beach. Contreras, who has created several murals throughout South Florida, has a unique style that mixes classical portraiture with illustration and street art. The medium is latex and acrylic paints, with all art supplies for the project provided by Liquitex, a company dedicated to art education and community outreach programs.

The Downtown Hollywood Mural Project was launched in August 2012 and currently includes 11 other murals on building facades throughout the historic downtown arts, music and entertainment district.

“I’m very honored to be part of this because all of the artists who have created murals in Downtown Hollywood are world-renowned and people I admire,” Contreras said.

Melina’s Lingerie proprietor Elsie Johns, who has owned the family business at 2010 Hollywood Blvd. for the past half century, gave her input for the mural design, requesting a “bare beach scene” and her preferred hair color for the two bathing beauties.

She said she’s very happy for her shop to be part of the Downtown Hollywood Mural Project. “It’s beautiful. It brightens up the whole town,” Johns said.

“The City is doing a very good job of getting quality artists involved,” she said. “I think that the mural program is making Downtown Hollywood more attractive to new businesses and young people.”

For more information on Hollywood’s Downtown and Beach districts, including the Downtown Hollywood Mural Project, ArtWalk or other events, call the Hollywood Community Redevelopment Agency (CRA) at 954-924-2980 or visit www.hollywoodcra.org.