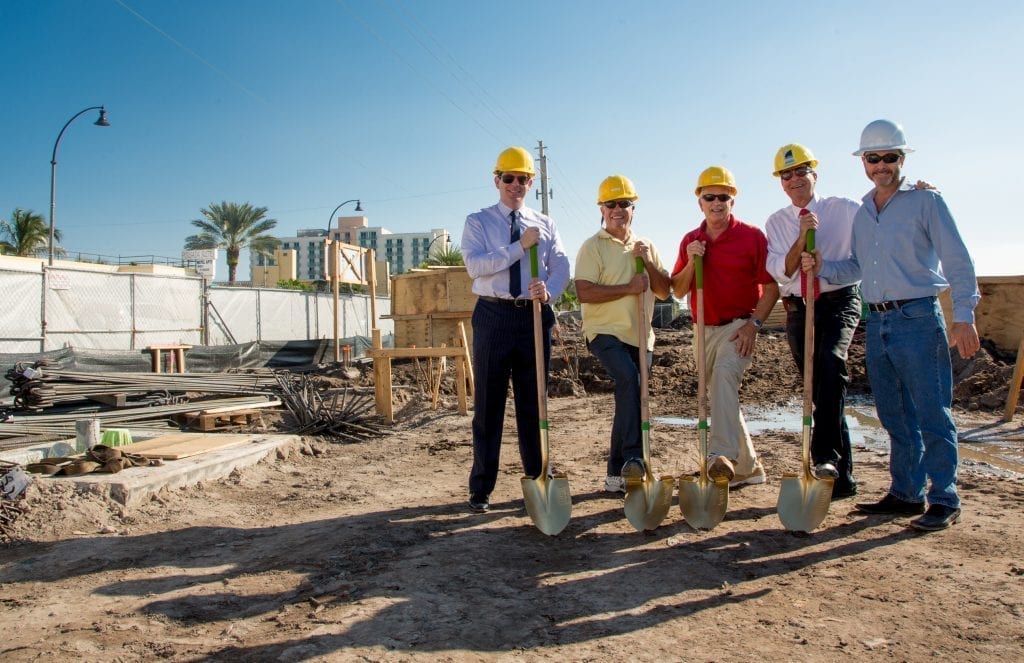 Hollywood Beach has the U.S. Army Reserves to thank for a boutique condominium being built at the northern end of Ocean Drive. Hollywood attorney Eric Ansel and developer Charlie Sher both attended South Broward High, but they became real buddies when they served together as stateside medics during the Vietnam War. A few years ago they were driving on A1A and spotted a for sale sign. What a great site for a development project, they thought.

Indeed they were right. Located at 2900 North Ocean Drive, the property sits on the Intracoastal Waterway with a view of the Anne Kolb Nature Center, a lush, tropical expanse that will never be developed.

When completed in the spring of 2015, Sky Harbor will be a five-story, eight-unit masonry structure with four floors of living space over ground level parking. Each unit will be a corner unit with 2,036 square ft. including three bedrooms, 3 ½ baths, and a 700 square ft. wrap-around deck.

Floor to ceiling glass will afford full views of the Intracoastal to the west and partial views of the ocean to the east. There will be two units to each floor with an elevator opening into a private vestibule, and all interior elements will be impeccably executed. Along with key controlled elevators, the security system will feature electronic door controls.

But Sky Harbor will also have something that very few South Florida condominiums have—eight boat slips capable of accommodating vessels up to 70 ft. in length.

“There was a dearth of dock space on the Intracoastal and we thought this was the solution for the boat owner who wanted a beautiful apartment and the convenience of a private dock,” said Eric Ansel.

“We saw this as a great opportunity to create a luxury lifestyle condominium where you can have a boat slip in your backyard and the beach in your front yard. It doesn’t get any better than that,” added Sher.

Similar to other high-end, small-scale condominium developments that are popping up in desirable neighborhoods across the U.S., Sky Harbor is for people who favor intimacy and privacy over high-rise density. The land that it sits on was once home to the Sky Harbor Motel so its name is an acknowledgement of history.

Even Hollywood’s mayor is pleased with the project.

“Sky Harbor reflects a very sensible less-is-more development philosophy that doesn’t try to cram too much on a single site or push the envelope in terms of density,” said Mayor Peter Bober. “It’s going to help Hollywood keep its quaint neighborhood feel and that is what differentiates the city from those to the north and south. I think it’s going to be a great asset to the beach.”

The perfect pied-a-terre for those who like luxury, space, and privacy, Sky Harbor is likely to sell out quickly. For more information, contact Charlie Sher at 619-977-6606 or www.skyharborcondominiums.com