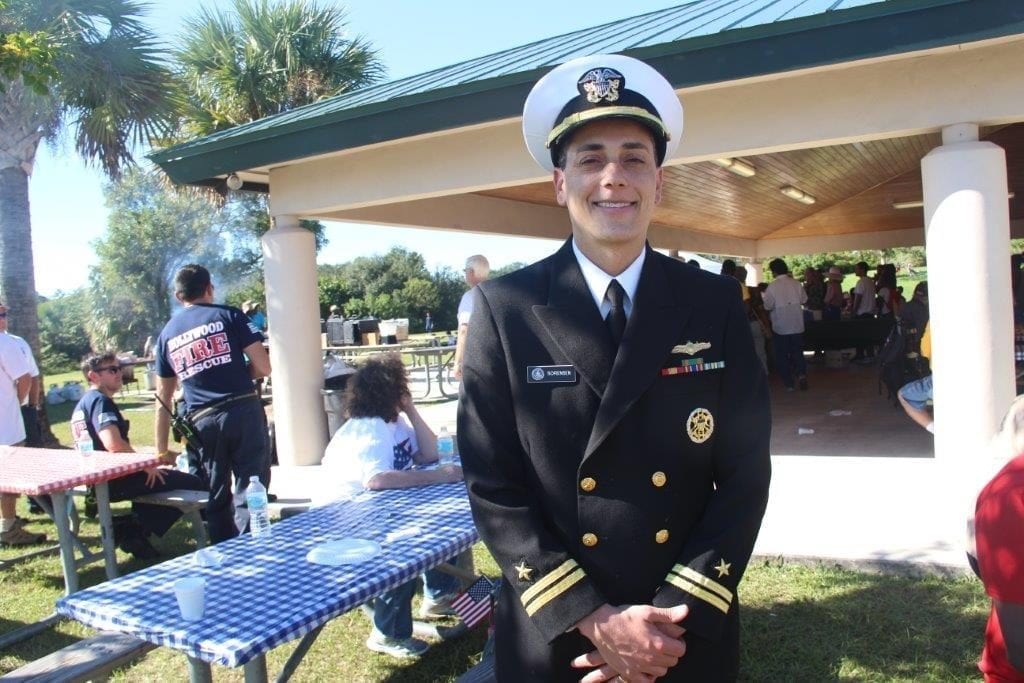 William Triacrico served in the U.S. Army during World War II. He participated in battles in the Philippines and was part of the occupation of Japan. He received a purple heart and saw effects of the bombings of Hiroshima and Nagasaki.

“When we first arrived in Japan everyone was afraid of us and we had to show them that we were not going to kill them,” said Tricarcio. He attended the Veterans Day Barbecue at TY Park in Hollywood. He was joined by his brother Frank Tricarico, who served as a pharmacist’s mate in the U.S. Navy.

Veterans of various ages attended the barbecue. Lieutenant Ben Sorensen of the U.S. Navy Reserves participated in the barbecue. He is an intelligence officer. “I think it is good that we are supporting our veterans,” Sorensen said.

Frank Hubbell, a veteran of the U.S. Navy who served in the Korean War provided musical entertainment. He enjoyed the opportunity to perform at an event for military veterans.

Russell Setti, a U.S. Air Force veteran said it is important to support the military. “We need to have a strong military to stand up to organizations like ISIS,” said Setti.

Commissioner Traci Callari said, “This event was phenomenal. We are getting people together to thank America’s veterans,” said Callari.

Mayor Peter Bober, who has led the effort to have a Veterans Day Barbecue was pleased that so many people came. He estimated that 750 came and enjoyed  a barbecue lunch and the chance to honor veterans. “This event exceeded my expectations. It is important to remember that freedom isn’t free. We had city employees who put in a lot of effort to make this barbecue happen,” said Bober.

The barbecue had been scheduled for Sunday but because of weather conditions was moved to Tuesday, the actual Veterans Day.