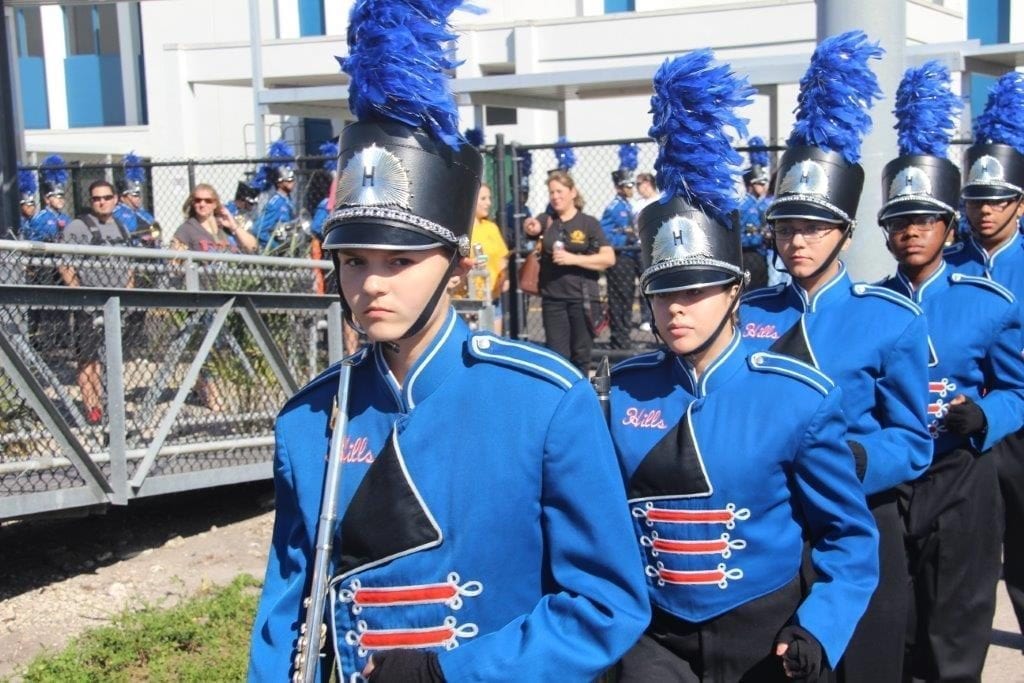 Jordan Akomer, loves being the band captain of the Hollywood Hills High School Marching Band. He has made many friends in band and achieved success as a musician. He plays the alto saxophone.

“I have learned to become a more effective leader in the band,” said Akomer.

Maydelisssa Pinell has enjoyed a successful career in the Hollywood Hills Marching Band. She is one of the drum majors and plays the clarinet and trumpet. “It is great to be a part of the band. I love to play music and I have made a lot of friends,” said Pinell.

“I am proud of this band. This is my first year as the band director at Hollywood Hills and next year we will do even better,” said Jeffrey L. Lawson.

And being a part of the marching band is far more than doing well at an assessment. Lawson believes marching band is a great activity for young people. “This gives students a chance to create art and do something musical. It builds camaraderie and community. The band students feel they belong somewhere,” said Lawson.

The Hollywood Hills band performed at the recent Falcon Sound Invitational at Flanagan High School. And the band performs at football games. “We have fun at the games. We play contemporary, rock and hip hop at the games,” said Lawson.

Emily Piccirillo, who plays the clarinet and is captain of the woodwinds believe the band performed well at the assessment. “We did a good job. I love being the band because it is like being part of a big family,” said Piccirillo.

Shelby Kieler, captain of the Hollywood Hills color guard also enjoys the opportunity to be part of the program. “Color guard is my life. I love it,” she said.

Austin Jones likes playing the vibraphone and being a member of the Hollywood Hills band. “I have been in band since I was in middle school,” he said.

And the band program depends on parents who are members of the band boosters. “We raise money by holding car washes and performing in front of Chili’s,” said Celia Akomer, president of the Hollywood Hills Band Boosters Club. “We do this because we want to help our kids.”