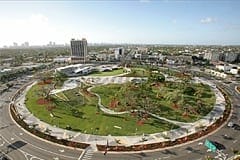 Hollywood wants to redevelop its downtown section. And to encourage this redevelopment, the City is focusing on an area known as the Regional Activity Center (RAC) Land Use.

In 2009 the City of Hollywood adopted the Downtown Master Plan. The goals of the Master Plan include the promotion of the Downtown area to create a sustainable urban district, the establishment of character districts and the strengthening of connectivity and mobility. There is a need to identify development opportunities and the creation of zoning recommendations to reinforce district character and protect residential neighborhoods.

One of the biggest drivers for the concepts in the Master Plan was the RAC.  In order to attract the right kind of development, the right regulatory framework needs to be in place. The purpose of the RAC is to provide that framework.   The RAC is a high intensity, high density multi-use area designed as appropriate for growth by the local government or jurisdiction.

While the RAC provides the adequate land use framework for the vision, the existing Zoning, does not. To address these issues the Master Plan proposed eight character districts.  The purpose of these districts is to build upon the existing character and assets; while setting up the framework for the desired development.  Based on these districts, zoning recommendations were created. These focused on not only creating a cohesive, visually more attractive, more pedestrian friendly urban environment; but also placed strong emphasis on providing adequate transitions to protect the adjacent residential uses.  All eight of these districts were studied in detail during the second phase of the Master Plan and zoning recommendations were created; In two of the districts, the recommendations were transformed into zoning regulations and adopted in 2009–the North Downtown and the Young Circle Districts.

The Community and Economic Department and the Community Redevelopment Agency (CRA) are now in the public outreach phase to neighborhood associations in the RAC and adjacent to the RAC to review recommendations for the other six districts and to gain their input.  In the Spring of 2015 recommendations will be brought forth to the City Commission for review, according to Joann Hussey, spokesperson for Hollywood.