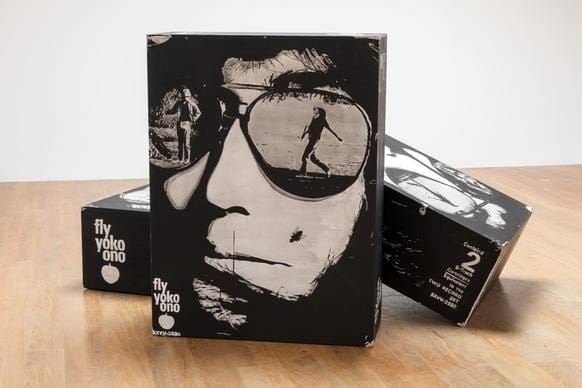 Hollywood, Fla. – Sunday, Jan. 18, 2015, is the Art and Culture Center of Hollywood’s monthly Free Admission Day as well as the last day to see the popular Dave Muller exhibition and three other shows. Also, present that day will be Michael Dean of yardbird records, who will have his pop-up record store open to buy and sell vinyl and other rock memorabilia.

For Rock ‘n’ Old, Muller painted a mural based on the evolution of rock ‘n’ roll as a genre. The artist complemented this mural with paintings up to 7 feet tall that replicate the spines of record album covers. These depictions of album cover spines are rendered at the height of the person who has chosen them.

The paintings serve as portraits of individuals based on their musical taste, while exploring the relationship between music, memory, and human experience. Muller, who has exhibited internationally for nearly two decades, also integrated six music stations and sculptural elements in the gallery. Represented by Blum & Poe Gallery (Los Angeles), Muller was their inaugural solo exhibition for the gallery’s new Tokyo space.

In Bhakti Baxter’s Returning What Was Borrowed, familiar day-to-day objects take on new roles that no longer conform to the purposes of design but rather the inherent physical properties contained in the materials of these objects. Baxter was born in Miami, where he currently lives and works. He has exhibited widely in the United States and internationally. This exhibition features sculptures Baxter made between 2011 and 2014 in Miami’s Little Haiti neighborhood, where he has been based for the past four years. This exhibit was selected as one of the top 10 exhibitions to experience in the Miami Herald’s 2014/2015 Season of the Arts guide.

Michael Dean, who goes by the lowercase sobriquet dj yard, transformed the Center’s Project Room into a pop-up record store. Dean, proprietor of Hallandale-based yardbird records, is one of the finest purveyors of vintage vinyl in South Florida. Dean spun for WBUS, aka The Magic Bus, when underground radio was in its infancy in South Florida.

Annie Buckley’s interdisciplinary and participatory project The People’s Tarot includes original collages, a tarot deck and guidebook, two print editions, and readings. Buckley began The People’s Tarot as a means of integrating more intuition into what felt like an increasingly analytical practice. The artist is familiar with the Tarot and has owned four decks over the years. She integrates meditation and research into her collage process to create a new deck with a humanist philosophy. Interaction and intuition are at the core of this project.

This artist-led project is designed to put art in viewers’ hands – literally, conceptually, and metaphorically. Readers/viewers use their own intuition in viewing the work and interpreting the cards. Buckley lives and works in Los Angeles and in addition to her art practice is also a contributor to Artforum.com and the Huffington Post. Visit Anniebuckley.com for more information about her work.

Gallery hours are Tuesday-Friday, 10 a.m. to 5 p.m. and Saturday-Sunday, noon to 4 p.m. Free parking is available at the Center, which is located at 1650 Harrison St. General admission to the Center’s galleries is $7 for adults; $4 for students, seniors, and children ages 4 to 17; and free to Center members as well as children under the age of 4. For more information on these exhibitions, please call 954.921.3274 or visit ArtAndCultureCenter.org.