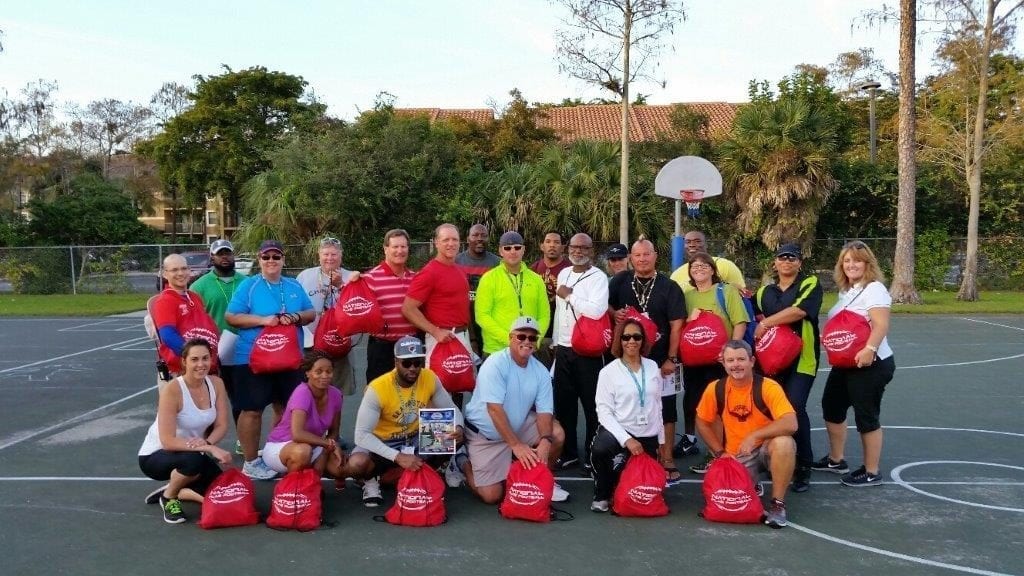 In addition, National Flag Football announced a donation of $20,000 worth of flag football equipment to 100 elementary schools in Palm Beach and Broward counties. Each school is also receiving a curriculum guide to help physical education teachers incorporate flag football activities into their program. This curriculum helps schools meet the Florida Beachmark P.E. standards that require P.E. teachers to cover the fundamentals of any game they teach to small groups.

“We have eight locations in South Florida. We have also hosted a series of training sessions for interested physical education teachers so they can start doing some flag football drills and activities in the classes,” said Francis Meram, executive director of National Flag Football.

The goal of the program is to teach basic football skills to children who might want to pursue football at more competitive levels as they get older. “We want to get young athletes to play football again and bring back the essence of football. We want children to enjoy football at a young age. We will teach the basics of throwing, catching, running routes and flag pulling,” said Meram.

The Broward School District is pleased with the donation. “Our physical educators found immediate uses for the National Flag Football equipment. They were anxious to try out the skills learned from flag football training and to incorporate the equipment into suggested lessons from our standards and research based curriculum,” said Charmain Sutherland, PEP Grant Facilitator, Physical Education Broward County Schools.

Football has always been a rough and tumble game. But with all the recent reports of concussions and other severe injuries, a growing number of parents no longer want their children to play traditional football.  And this has people who love football concerned.

So the National Football League youth flag football organization established National Flag Football in 2006. The organization offers flag football for boys and girls aged four through 14. The goal is to offer children an opportunity to participate in a fun, non-contact activity where they can learn the value of team work.

Anyone who wants to register can visit www.NationalFlagFootball.com or call 786-309-5785.