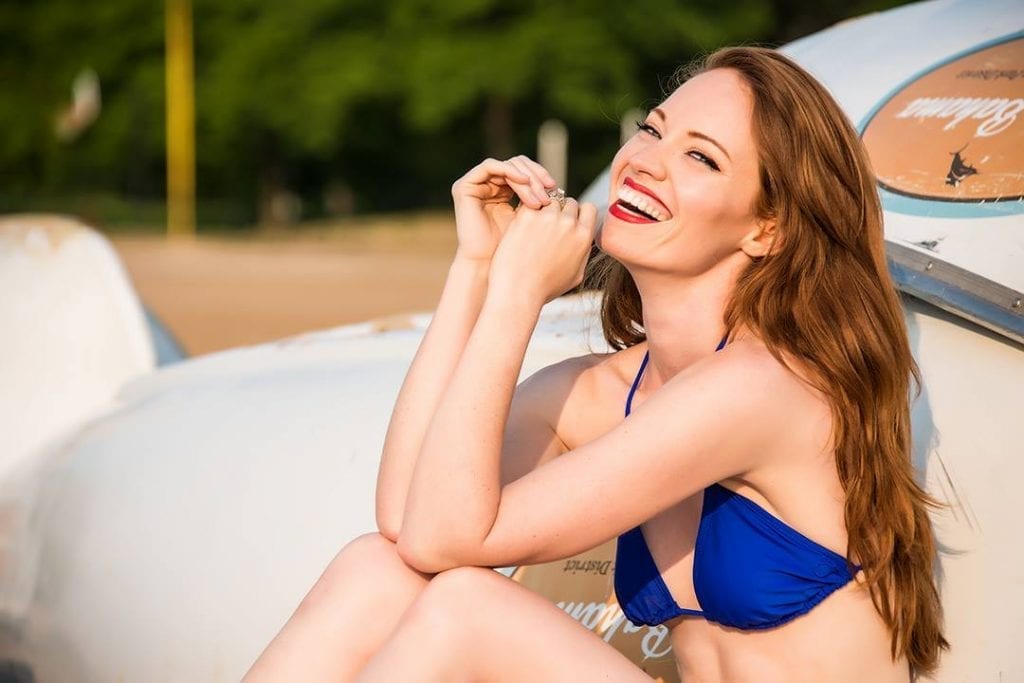 You know you’ve seen them before.  Heck, they practically have their own genre: “cancer stories”.  A mom, or perhaps a teenager, faces a devastating diagnosis and proceeds through the five stages of grief before finding peace and teaching us all timeless spiritual truths.  It’s as old as Brian’s Song, The Bucket List, The Fault in our Stars, Love Story, The Doctor, and Sweet November.  If we really put our mind to it, we can probably name a dozen more.

But every cancer story is different, and in real life, the mix of tragedy and triumph is rarely as neatly packaged as the cancer story genre would have us believe.  I bet you’ve never seen a cancer story like Aniela’s.

For one thing, Aniela McGuinness isn’t a mom, or a student, or a teenager.  She also (spoiler alert) doesn’t die at the end.  The story doesn’t even begin with her cancer story.  It begins with her mother’s.

Also not your average mother’s day tribute – Aniela’s mother died young, and Aniela will never be able to conceive.  Not that she ever wanted to.  Like I said, not a typical mother’s day story.

Aniela before her mastectomy and chemo
—

DNA is an amazing thing.  Billions of little base pairs duplicating in your body, each cell loaded with the complete blueprint to make you. With any duplication, however, every so often a mistake comes up, and something is copied incorrectly and in the wrong combination can lead to a cancerous tumor.  But even then, we have a few weapons in our genetic arsenal, genes whose only purpose is to stop, or kill, tumors.  You’ve probably heard of two of them, known as BRCA1 and BRCA2.  Specifically, these genes help stave off breast and ovarian cancers, and almost all of us, male and female, rely on them to keep us from developing cancers of the breast, ovaries, colon, pancreas.

Cancer is, fundamentally, a disease of DNA errors.  And we use BRCA1 and BRCA2 to fix errors.  Unfortunately, the BRCA genes are themselves encoded in DNA.  And they too, can have errors.

Aniela’s mother, Pam, had such a mutation.  At 46, she developed, and survived breast cancer, through a lumpectomy and radiation.  But BRCA errors persist beyond breasts, and still exist in every single cell in a person’s body.  10 years later, Pam developed ovarian cancer, and died seven years later.  Aniela was 13 when her mother’s cancer story began.  Almost twenty years later, it’s still going on.

Like many people touched by cancer, Aniela chose to test for BRCA mutations when she was 26, and found that along with her fair skin and great smile, she had inherited a BRCA-1 mutation from her mother.  From the time she was 26, she knew she had roughly an 80% chance of developing breast cancer in her lifetime, and a 55% chance of developing ovarian cancer.  In 2014, she, she opted for a prophylactic mastectomy.  Four days before sheduling surgery, she found out it wasn’t prophylactic after all, she actually had breast cancer.

“I never thought I would actually get cancer.  I thought I was special.”  Even after a scrape (sorry!) with skin cancer a few years ago, she still thought she would make it through unscathed.

A Hollywood native pretty much her whole life, Aniela attended South Broward High School, where she met her future husband, Jordan.  They’ve been together since she was 15 years old.  She lives on a quiet street in Hollywood Hills, and is close to her neighbors.  “When I found out I had cancer I went straight to my neighbor’s house.  They knew before my husband did.”

“My mother was very quiet about her cancer,” she says.  “As a caregiver, it made it very hard on my dad and I.  We burned out.  I didn’t want to do that to Jordan.“  Instead, she went public.  At first, she created a web series called “My Breast Choice”, about her decision to remove her breasts.  Eventually, it turned into a story about chemotherapy.  Looking to ease the burden on her husband, she also outsourced doctor’s visits and chemo treatments the friends, by posting on Facebook and “awarding” volunteers with the chance to accompany her and spend the day with her.

“We had so much fun.  Friends kept telling me that they had come expecting to cheer me up,  and by the end of the day it was them who had been cheered up.”

As a writer, model, and actor, Aniela didn’t stop there.  A few days after her surgery, she was challenged by a friend to create a one-woman show.  “I was asked to do a show by David Christopher at Just the Funny”.  She reached out to a performer friend in Chicago for advice, and with a co-writer, spent the next two months working on her show.

“It took us about two months to write, and we continued writing, and the last 15 minutes took about another 3 months,“ she says.  “The story kept changing because I was literally writing during my chemo, and as my story changed the show evolved too.”

One thing that didn’t change was the ending.  From the first draft, she planned on showing the audience her surgery scars.  “We both really wanted the ending, and it ended up working really well.  Besides, you know everyone in the audience was wondering what it looked like.  And the googly eyes make it that much more fun”.  You kind of have to be there to see that.

She premiered her show “I Don’t Have Cancer” during her chemo treatments.  In fact, she also designed the website, the palm cards, the posters, sold tickets, and marketed the show during chemo.

As the title of her show says, she doesn’t have cancer.  But she did.  And her cancer story is not over yet – Aniela will be undergoing a complete hysterectomy soon, with the attendant early menopause.

And what about the most important part of the cancer story genre?  The life lesson?

“We put value in assets with diminishing returns. The hair, the nails, the eyelashes, the beauty, the perky breasts, the tight body all this things we put so much value in can be stripped away.  If I still have value after these things are gone, then they probably weren’t that important to begin with.“

If cancer could speak, what would it say?