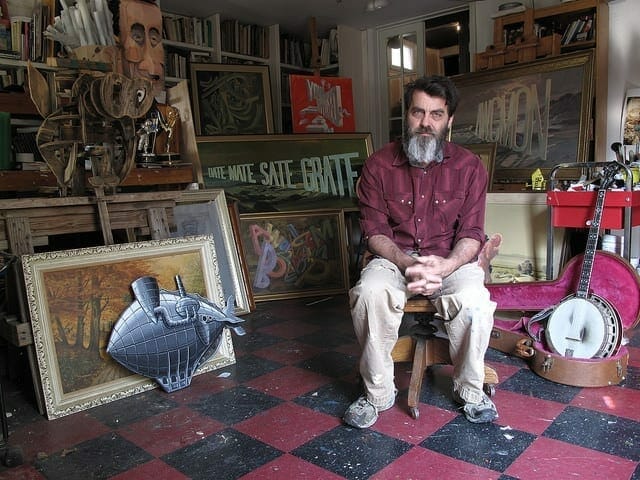 Wayne White: “Art is Supposed to Hypnotize You or Something” opens June 13 through August 23

The Art and Culture Center of Hollywood is helping celebrate the 100-year anniversary of Broward County by commissioning internationally known and three-time Emmy Award-winning artist Wayne White to create a large-scale puppet of the county’s namesake, Napoleon Bonaparte Broward. White will do a nine-day artist residency at the Center where, alongside pre-selected high school art students, he will create the puppet which will be the centerpiece of a major exhibition for the Center. Wayne White: Art is Supposed to Hypnotize You or Something, will be on display at the Center from June 13 to August 23.

This will be the first solo exhibition in Florida for the Los Angeles-based artist, who is originally from Tennessee. White will present a mixture of his eclectic, witty and inspired two- and three-dimensional works alongside the massive puppet head

The celebration will all start on Friday, June 12 at 6 pm with a puppet parade at ArtsPark at Young Circle in downtown Hollywood. The public will be invited to bring along their own puppets and march alongside White and his puppet, together with puppets made by the students who worked with him. The special opening event will culminate with an artist’s reception at the Art and Culture Center on 1650 Harrison Street. The parade at ArtsPark starts at 6 pm and the reception at the Center is at 7 pm.

White will then give an artist talk at the Center at noon on Saturday, June 13. Admission to the talk is free for all members and students of all ages (must present student ID) and is $7 for non-members.

The Art and Culture Center will host guided field trips and group tours for the exhibition. Visitors will not only learn about the history of Broward County in a fun and entertaining way, but will be able to bring their own inspirations to life in the Interactive Art Room following the guided talk! The Interactive Art Room will be open throughout the run of the exhibition.

Born and raised in Chattanooga, Tennessee, Wayne White draws upon his memories of the South to create highly unique works for film, television, and the fine art world. In addition to his three-dimensional works, White is renowned in the contemporary art world for his “word paintings.” White repurposes vintage paintings often found in thrift stores, and integrates them with painted phrases such as “Drop the Country Boy Act,” “Dude Started Freaking Out,” and “Art is Supposed to Hypnotize You or Something.” White will also exhibit a selection of works on paper, many of which have been reproduced in the monumental monograph designed by Todd Oldham, Maybe Now I’ll Get the Respect I So Richly Deserve.

White won three Emmy Awards for his art direction on Pee-wee’s Playhouse, where he created such iconic puppets as Randy, Dirty Dog, Chicky Baby and Cowntess the Cow. He was also the art director on acclaimed music videos for Peter Gabriel (“Big Time”) and Smashing Pumpkins (“Tonight, Tonight”), for which he won Billboard and MTV Music Video awards, respectively. He is the subject of the acclaimed 2012 documentary film Beauty is Embarrassing, by director Neil Berkeley, which has been featured in several national and international film festivals with tremendous praise.

Napoleon Bonaparte Broward was the 19th Governor of Florida from 1905-09 and encouraged development in the region by initiating the drainage and channeling of the Everglades. Broward also helped improve Florida’s state university system as well as supported reform of the state hospital network. The County was named for him by the state upon its incorporation in 1915.

This exhibition is funded in part by the National Endowment for the Arts, Visit Florida, Citizens Interested in Arts, and a Cultural Tourism Program grant from the Broward County Board of County Commissioners as recommended by the Broward Cultural Council and the Greater Fort Lauderdale Convention and Visitors Bureau.

The Art and Culture Center of Hollywood is located at 1650 Harrison St. in Hollywood, FL. Gallery hours are Tuesday – Friday 10 am – 5 pm, and Saturday – Sunday, Noon – 4 pm. Call 954.921.3274 or visit ArtAndCultureCenter.org for prices, and more information.