Unveiling event for 'Inside Out' Downtown Hollywood mural project set for Sat., June 20 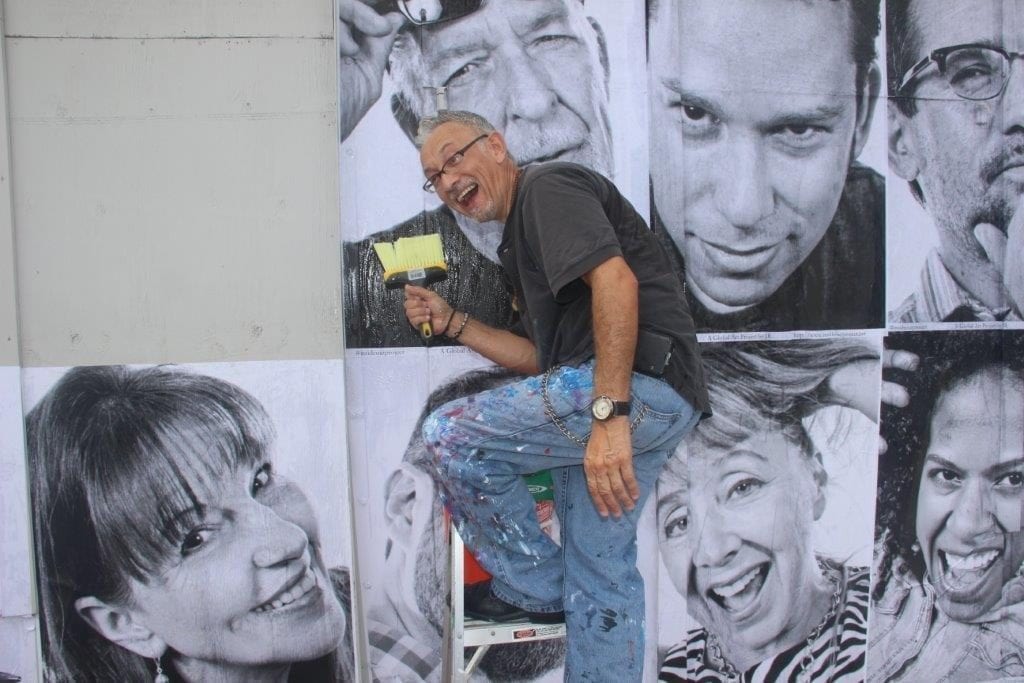 Photo portraits of creative individuals making a difference in Hollywood were transformed into a large-scale mural on Saturday, June 13 with the installation of Inside Out Downtown Hollywood, part of a global photography art project and one of the ways in which community groups and organizations are commemorating Broward County’s centennial.

Close to 80 black-and-white photo portraits, each measuring 36 inches by 53 inches, were pasted on multiple walls of a two-story building at 1740 S. Young Circle. The property, which is owned and managed by Downtown Hollywood-based developer MG3 Hollywood LLC, sits across the street from the ArtsPark at Young Circle and steps away from the Art and Culture Center of Hollywood, where the professional photo shoot took place May 9.

Organized by Broward 100, the Hollywood Community Redevelopment Agency (CRA) and the Art and Culture Center, Inside Out Downtown Hollywood is one of four innovative art and performance projects offered through Broward 100 – Celebrating the Art of Community, which commemorates Broward County’s 100th birthday.

Those featured in Inside Out Downtown Hollywood will join over 200,000 people from more than 180 countries who have taken part in the world’s largest participatory art project. Inside Out is inspired by renowned Parisian street artist JR, who uses his camera to show the world its true face by pasting photos of the human face across massive canvases.

Since 2007, Inside Out installations have appeared on walls, sidewalks, streets, skyscrapers and historic buildings. Each installation is documented, archived and exhibited online to capture the collective messages of community groups through headshots of their individual members.

Installations have occurred in over 100 countries and major cities including Paris, London, Rome, New York City, New Orleans and now in Broward County, with Broward 100 being one of the largest participating organizations in the global art project. Inside Out Broward will showcase the human spirit of the residents and hard-working community groups of Broward County and tell their stories to the community and the world.

The temporary mural installation on June 13 was in conjunction with the opening of the Art and Culture Center’s “Wayne White: Art is Supposed to Hypnotize You or Something” exhibit at 1650 Harrison Street.

An unveiling event for the mural will take place during Downtown Hollywood ArtWalk from 7 to 10 p.m. Saturday, June 20. The free ArtWalk series, presented by the Hollywood CRA every third Saturday, features art exhibits, live painting, live entertainment and complimentary refreshments at art galleries and participating businesses.

In addition to the Art and Culture Center, the historic downtown arts, music and entertainment district is home to the innovative ArtsPark at Young Circle, the Cinema Paradiso art-house cinema and eye-catching murals painted by area artists on 14 buildings as part of the Downtown Hollywood Mural Project (DHMP). Free on-street parking is available in three-hour increments between 8 a.m. and 8 p.m. Municipal garage parking is $1 per hour at 251 S. 20th Avenue and 251 N. 19th Avenue.

For information on Downtown Hollywood events or businesses, call the Hollywood Community Redevelopment Agency (CRA) at 954-924-2980 or visit www.hollywoodcra.org.

For information on the Art and Culture Center of Hollywood, call 954-921-3274 or visit www.artandculturecenter.org

Visit www.broward.org/Broward100/InsideOut or email [email protected] to learn more about the Broward 100 Inside Out project.