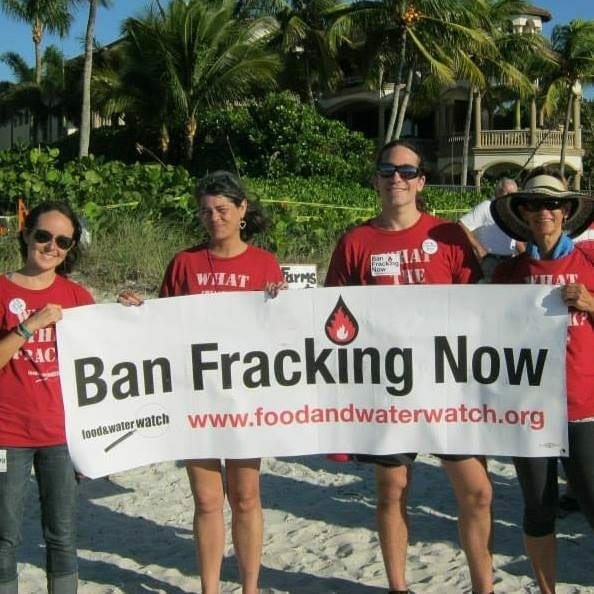 When the City of Hollywood joined a growing number of Florida municipalities and counties in passing an anti-fracking resolution, it represented both a personal and a professional victory for Jennifer Ehrenfried, a Hollywood resident who works for the nonprofit public interest organization Food & Water Watch.

Fracking, a controversial hydraulic fracturing technique for recovering natural gas and oil from shale rock with chemicals injected underground, has become an even hotter topic in South Florida since a Miami-based oil company has proposed drilling in the Everglades, just five miles west of Miramar.

“Through my work with Food & Water Watch and the statewide coalition Floridians Against Fracking, I have become aware of the many dangers these extreme forms of fuel extraction pose to south Florida, especially coastal cities like Hollywood,” said Ehrenfried, Florida intern with Food & Water Watch. “Besides exacerbating climate change and sea-level rise, fracking operations threaten our water supply, bring air, noise and light pollution with their round-the-clock operations and heavy truck traffic, as well as all of the dangers associated with transporting the fuel and toxic chemicals used in the process.”

Kantor Real Estate LLC, which submitted an application to the state over the summer, owns about 20,000 acres of Everglades land. The exploratory project would necessitate drilling as deep as two miles on a 5-acre oil pad, around the clock for up to 80 days, to assess the feasibility of extracting oil.

While drilling in the Everglades is not uncommon, critics of the Kantor project say it’s much too close for comfort, as many of the region’s municipalities draw all, or at least most, of their drinking water from the Biscayne Aquifer that runs through the company’s Everglades property.

The anti-fracking resolution unanimously passed by the Hollywood City Commission July 8 supports a statewide ban on “extreme hydraulic fracturing and other similar methodologies for energy resource extraction in Florida.”

“As a longtime resident of the area, I was so proud to see the Hollywood City Commission unanimously pass a resolution supporting a statewide ban on various forms of fracking,” Ehrenfried said. “It is a rare pleasure to see local governments standing up to protect their communities and the environment the way Hollywood has. The commission has shown great leadership, foresight and good stewardship by taking this step.”

Consumer advocate groups say the extraction of oil and gas has led to serious health and environmental issues in states across the country, resulting in a growing number of communities banning fracking within their borders. To date, resolutions have been passed by municipalities and counties in 24 states and Washington, DC. More than 30 anti-fracking resolutions have been passed in Florida.

In addition to its efforts to ban fracking, Food & Water Watch is working around the state to protect the food supply through mandatory GMO food labeling. Visit www.foodandwaterwatch.org for more information on the organization’s efforts to protect the environment and ensure the safety, accessibility and sustainability of food, water and fish consumed by the public.