Chaminade-Madonna athletic teams off to a great start to season 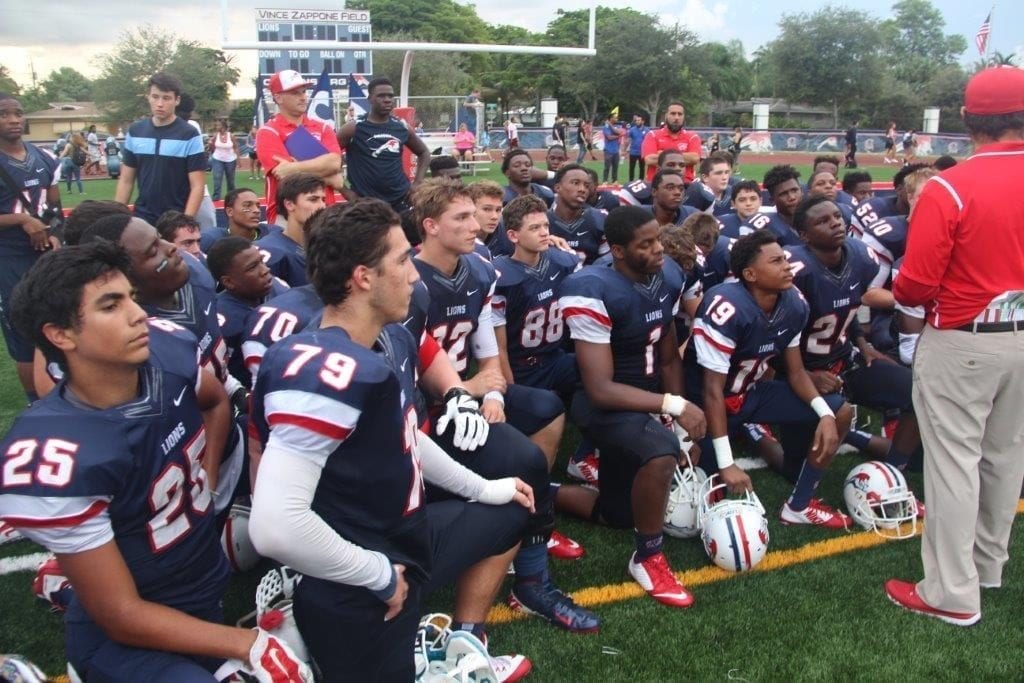 The Chaminade-Madonna football team is off to a 4-0 start. The Lions recently defeated Monsignor Pace 35-7.

Head Coach Jason Milgrom is pleased that the team is doing well and hopes the wins continue. “We have a good defense,” he said.

The Lions recently defeated Everglades Prep Academy 45 to 6 as well as Cardinal Gibbons, which has a tradition for competitive football.

Top players include Xavier Williams, Davoan Hawkins and Shaun Shivers. “We have had a total team effort and we have a good team,” said Milgrom.

The Lions cheerleading team will participate in local, regional and a state cheerleading competition. Preparing for these competitions is very demanding. The cheerleaders must be in excellent shape to perform the stunts and routines.

At every Chaminade-Madonna home football game you can see 20 students who love to play the drums and get the audience excited. During a recent game, they were playing with great enthusiasm.

“We support the football team and we get the audience excited during football games and pep rallies,” said Logan Appleton, the captain of the Drum Line. “We love to perform. I enjoying being a part of the Drum Line,” he said.

The Lionesses dance team also performs at home football games, basketball games and other school events. “It takes a lot of hard work to be a successful dancers,” said the team’s coach, Lauren Broeckelmann. The Lionesses have received recognition at a national dance event for jazz and team performance.

Alexis Whittaker loves being a member of the Chaminade-Madonna volleyball team. A sophomore, she plays outside hitter and is leading member of the team. “We are a very close team,” she said.

“We have dedicated players,” said Johnson. He said that many volleyball players compete year round on school and club teams.

The Chaminade-Madonna volleyball team recently hosted the C-M Cares Volleyball Invitational which included 16 teams from around Florida. The money raised from the tournament will go toward cancer research. Johnson was pleased to see the players learning the importance of supporting a positive cause and caring for others.  The fund raising effort included the sale of pink shirts to honor people who are struggling with cancer. More than 400 shirts were sold.