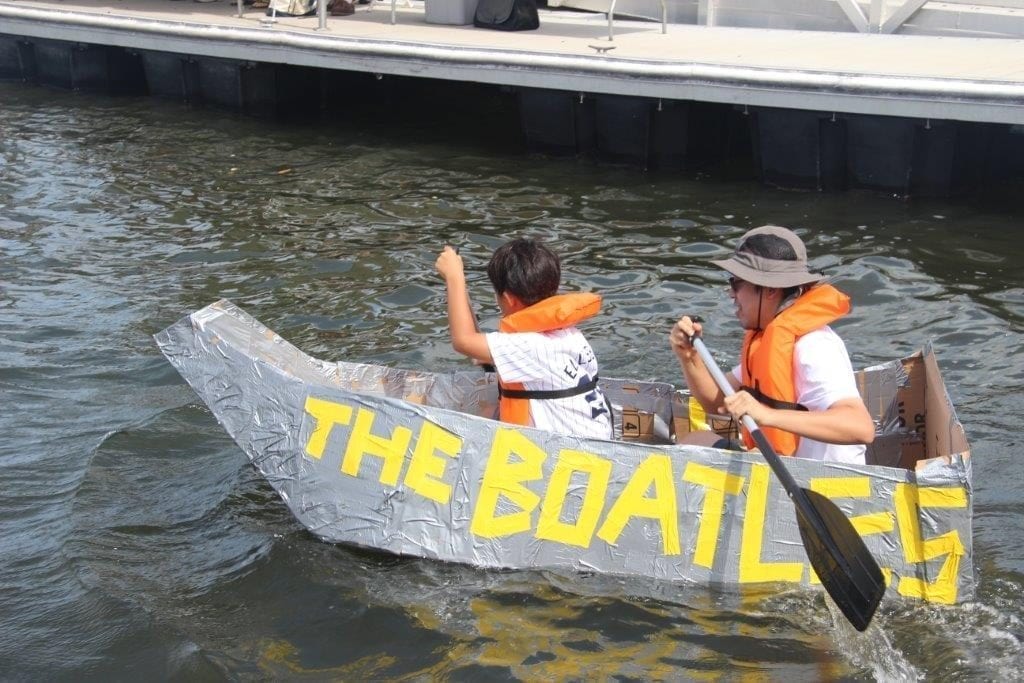 Families and friends got together at the City of Hollywood Marina to participate in the 7th Annual Cardboard Boat Race.

And while it was a competitive event, most of those who entered were there to have some fun and a few laughs. During the morning the teams worked under a tent to build their boats from cardboard. Then at about 1:00 p.m. the competition began. Some of the boats were crewed by young children. But teenagers and adults also joined in the fun.

The challenge was to paddle a very small boat a short distance. Some of the competitors struggled to keep their boats upright while completing the course.

Lara Rudd, a science teacher at McNicol Middle School brought members of the Gaia Club, an environmental elective class at her school. They built a boat and named it the “Gaia,” which stands for Grow Awareness in All. “We want to show people who were are. We also want to win and it takes team work to build the boat,” she said.

Two students rowed the boat. Afterwards, Ruddy was proud of her students.

Jim Melton of the “No Place Like Gnome” team said, “This is our third time doing this. We enjoy building the boat. It takes some teamwork but we have a lot of fun,” he said.

Jordan Merritt of “SS Sinks A Lot” said, “We had a lot of fun building our boat with our friends,” he said.

Tammy Fernos brought her son Hendrix Fernos. They and some friends built a boat their children named “Lego She Blows.” “It would be nice to win but we just found out about this a few days before the competition. We spent time with our friends and had some fun,” she said.

There was an enthusiastic audience at the event. They cheered on the competitors and made noise with horns.

Y’s There Water In My Boat (Greater Hollywood YMCA)