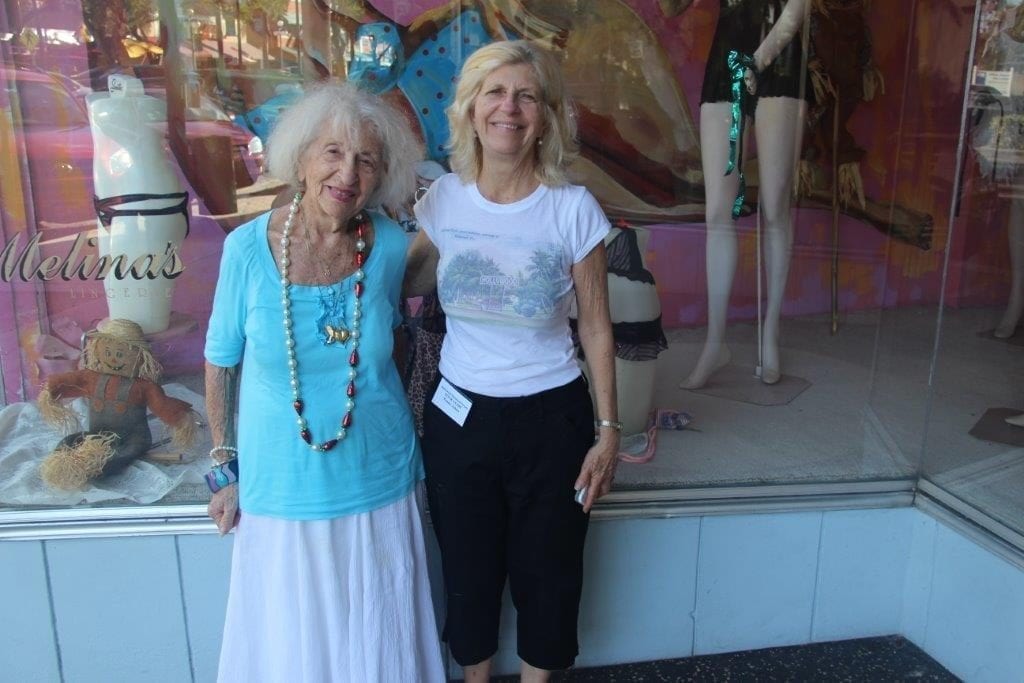 Founded almost 70 years ago, Melina’s Lingerie Shoppe, located at 2010 Hollywood Boulevard, is the oldest continuously operated family business in Hollywood. “It has taken a lot of hard work,” stated Penny Johns, daughter of owner/operator Elsie Johns, who is proud to have run the business successfully.

Elsie is the daughter of Melina’s founder, Melina Tomich, who moved to Hollywood from Nebraska with husband, Matt Tomich in the 1940s. Matt built the store and in 1946 the doors to Melina’s opened. Originally a children’s clothing store, the couple decided to branch into women’s wear, especially lingerie.  Johns realized not only the importance of regular customers but stated, “You have to stay with a business to be successful.”

Melina’s Ling erie Shoppe is just one of many small businesses that has helped instill the charm and whimsy that Downtown Hollywood offers its patrons, and was recognized among 40 properties on the Historic Walking Tour of Downtown Hollywood, held as part of the City’s 90th Anniversary. Those who participated in the Historic Walking Tour received a guidebook and enjoyed learning about Hollywood’s rich history. Many of the buildings have changed over the years, but volunteers from the Hollywood Historical Society were on-site and available to answer questions.

Among the volunteers was Joan Mickelson, Ph.D., a Florida historian born and raised in Hollywood. Joan’s knowledge of Hollywood is extensive, as evidenced in her books: A Guide to Historic Hollywood – A Tour through Place and Time, and Joseph W. Young Jr. and the Cit y Beautiful – a Biography of the Founder of Hollywood.

Around 1920, Joseph Wesley (J.W.) Young Jr., met up with Miami Beach creator, Carl Fisher. A land developer with a desire to build, Young was inspired to visit southeast Florida to find the “perfect spot for the city he imagined creating.” In the Introduction of the book, Then & Now Hollywood, by Hollywood Historical Society,  Joan wrote, “In the palmetto covered empty land between Dania and Hallandale, Young found it.” Who would have thought? One must also ask why the name ‘Hollywood’ in the midst of all this nothing? The only roads were the Boulevard, Dixie Highway and the Florida East Coast Rail Road (FEC). “Young chose the name Hollywood because he liked it,” wrote Joan, “not because of any fascination with movies.” Joan also noted that the movie Hollywood was in its infancy in 1920.”

With the help of Joan’s father, Tony Mickelson, who worked for Young beginning in 1919 and surveyed the land that is now Hollywood, Young created a plan for the city, and during the early 1920s encouraged people from the northern United States to come and live in his newly found land – Hollywood. From 1921 through 1925 “properties sold at an astonishing rate” and in 1925, Hollywood was incorporated. On May 30, 1947, Joan’s father, Tony, was named Hollywood City Manager; and, in honor of Hollywood’s enterprising founder, there is a bust of Young displayed at ArtsPark in Young Circle.

Also on site were volunteers Isa Swait and Hermine Vogler. They were happy to discuss the history of a once well-known theatre on Hollywood Boulevard that is now a cozy restaur ant; and Pattie Clempson, another volunteer who provided information on the history of buildings on Hollywood Boulevard, enjoyed reminiscing. “I remember spending a lot of time in some of the old stores that used to be here.”

There are a host of sites and books dedicated to Hollywood’s enchanting history. You can find out more at hollywoodfl.org, joanmickelsonphd.wordpress.com and hollywoodhistoricalsociety.org.