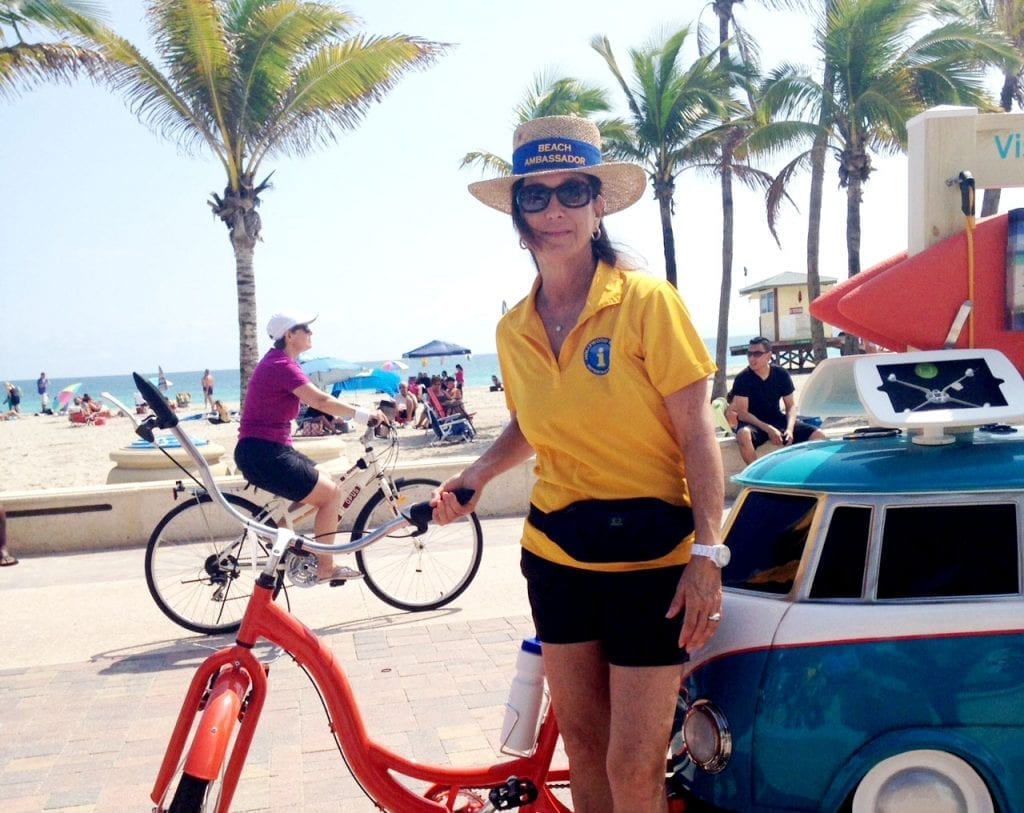 Rita Gambardella, resident of Hollywood for almost 20 years, gives of herself tirelessly to make Hollywood a better place to live.

“Everyone calls Rita when there is a problem that they can’t solve with code, crime, or community affairs,” said Mary-Ann Boscarino, long-time friend of Rita’s and Licensed Mortgage Loan Originator at New Image Realty in Hollywood. “When she is called upon, that’s it… she goes and coordinates efforts to make things happen.”

Rita is one of the founders of the New Image Task Force (NITF), a group of residents that have banded together to help minimize crime and blight and insure the highest quality of life for all Hollywood residents. Rita says the group started 5 years ago when there was a concerning uptick in crime in the Lakes and other neighborhoods.

“That prompted myself and several other residents to meet at our homes and start walking the streets in our red shirts with our crime watch banners,” states Rita. “We also demanded an increase in police presence and urged them to crack down on the criminal element in our neighborhoods.” The group frequently meets with city officials to stay informed and bring up troublesome issues that negatively impact the city.

Rita’s love of Hollywood started in 1996, when she was looking for the ‘perfect little city’ to open her Italian Restaurant. She recalls, “I found Hollywood to be charming, close to the beach and the people to be friendly and welcoming.” Mary-Ann was one such person, who became fast friends with Rita. “She was a great chef and wonderful hostess,” says Mary-Ann. “She’s a natural born leader who has no fear.”

After Rita sold the restaurant she became a realtor at Galleria International Realty in Fort Lauderdale. That was 14 years ago. “To this day I’ve had the incredible fortune to have cemented very close life-long friendships with many people who grew up here and are committed to keeping Hollywood the little big city with a lot to offer – without the hustle and bustle of Miami or Fort Lauderdale.”

Currently, NITF is working to clean up the corridor on Federal Highway, which Rita says ‘is a disgrace every day.’

The group attends many commission meetings, meets with city officials and keeps them accountable for time frames to get it done. “We’re still working on it,” states Rita, “and will do so until we get it right.” NITF wants to have a gateway to Hollywood that shows off the beauty and charm it has to offer. The group also fosters fellowship in Hollywood, by hosting full-moon beach parties and recently holding their first annual scooter poker run.

Rita also acts as ‘eyes and ears’ for the Hollywood Police Department as a driver for the volunteer group, Mobile Patrollers; and she walks the broadwalk as a Beach Ambassador, serving as a ‘kind of walking Information booth for our visitors.’

“Even when she goes for a run on our beautiful beach,” adds Mary-Ann, “she brings along plastic bags to pick up garbage along her way! No grass grows under that girl’s feet!”

For those who would like to help or get involved, you can visit NITF on Facebook, where you can stay current with their meetings, speak at city hall, help on National Night Out, go to the Hollywood Lakes civic meeting or any of your neighborhood civic association meetings.

“You can’t manage what you can’t monitor,” says Rita. “So stay informed, get involved!”