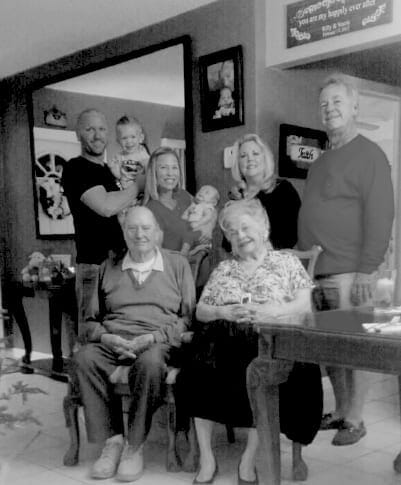 South Florida has long attracted people from all over the U.S . with it’s warm climate and tropical lifestyle; as well as immigrants from countries making their way here merely seeking freedom. With this influx comes diverse communities and cultures.

Hollywood is no different, and over the years it has welcomed many, including Canadians, Cubans, New Yorkers, Jamaicans, Chicagoans and Brazilians.

But what about the early settlers? The first families who settled in Hollywood hoping for a better life?

Here’s a peek at five generations of Hollywoodians that continue to help shape this ‘little town that could.’

It was 1924 when Indianans Byron and Mildred Pell decided to visit Hollywood, Florida, a ‘planned paradise’ being built by founder and developer, Joseph Wesley Young, Jr. Upon realizing the young town had no dentist, Byron seize the opportunity and start the town’s first dental practice. The first generation couple settled near South Lake, just east of Federal Highway. Dr. Pell practiced for many years on the corner of Tyler Street and Young Circle, behind the Publix. The practice was eventually passed on to Byron’s nephew, John Pell, and eventually purchased by Dr. John Mahon, who continues the practice today at 2450 Hollywood Blvd.

In 1934, the Pells had a daughter, Patricia Ann, who goes by Ann. Born in a little hospital in Fort Lauderdale, she attended South Broward High, the second oldest high school in Broward County. Ann soon met William F. Hunter, who introduced her to his brother, E.T. (Edward) Hunter, of Hunter & Hunter, PA, located at 1930 Tyler Street in Hollywood, and still in practice today.

Second generation Ann and Edward married and in 1955, they welcomed their daughter, Donna, born in Doctors Hospital on Van Buren Street, just south of Young Circle. Like her mother, Ann, Donna also graduated from South Broward High and got summer job  at Meekins Inc. The company was started in the 1940s at 3500 Pembroke Road, located next to the Coca-Cola Bottling Company of Hollywood.

While working at Meekins, Donna met her future husband, William P. Kirby, who was born in 1954 at Memorial Regional Hospital in Hollywood. William’s father, Robert had worked at Meekins for 25 years after migrating from Illinois at 13. And William’s mother, Mary, was born in the medical building where Donna’s grandfather, Byron Pell, had his dental office on Young Circle. William’s parents, Robert and Mary, both attended Little Flower School, on Federal Highway, until high school when they both graduated from South Broward High School, just one year after Donna’s mother, Ann’s graduation.

So, it seemed like destiny that “the kids” Donna and William would meet and become devoted friends. That friendship led to dating and, even while they were each in college dating others, the relationship lasted and the third generation eventually married.

In 1977 and 1979 respectively, William and Donna welcomed their children: son William P. Kirby, II, followed by daughter Karolyn and son Mark. All were born at Memorial Regional Hospital and the Kirbys made their home in Hollywood Hills while all attended and graduated from Hollywood Christian School.

William, II, and his brother, Mark, began working at Thermal Concepts, a full service air conditioning contractor in Davie, where William met his soon-to-be brother-in-law, Justin. Justin invited William to his home during Christmas one year to meet his family, which included his sister Stacie, a teacher living in Jacksonville. William and Stacie kept in to uch and the Hollywood family added a fourth generation in 2012, when they tied the knot. That same year, Stacie was also voted teacher of the year at Pines Charter, on Flamingo Road and Sheridan Street.

Today, Donna’s daughter Karolyn lives in Sunrise where she is a supervisor for Sheridan Health Care – originally a Hollywood business located on Sheridan Street. Donna’s son, Mark, recently moved to Chattanooga, where he continues work in the air conditioning business.

“After three children and 38 and 1/2 years of marriage, Bill (William) and I are still going strong,” Donna says. “But retelling this story, I realize how much history we have here in Hollywood, and how much fun we all had growing up together and going to school together.”

Donna currently works for the City of Dania Beach as an administrative coordinator, and Bill is shop supervisor for Banaszak Concrete, a company started in Hollywood in 1964.

Families create history merely by existing, so while Hollywood’s cultural landscape is ever-changing, history is present all around us. Hollywood’s native sons and daughters are born here, grow up here, start businesses here and the next generation continues the trend. Byron and Mildred Pell probably didn’t foresee how deep their roots would go when they decided to move from Indiana in 1924 and start a better life for their family — here in Hollywood.