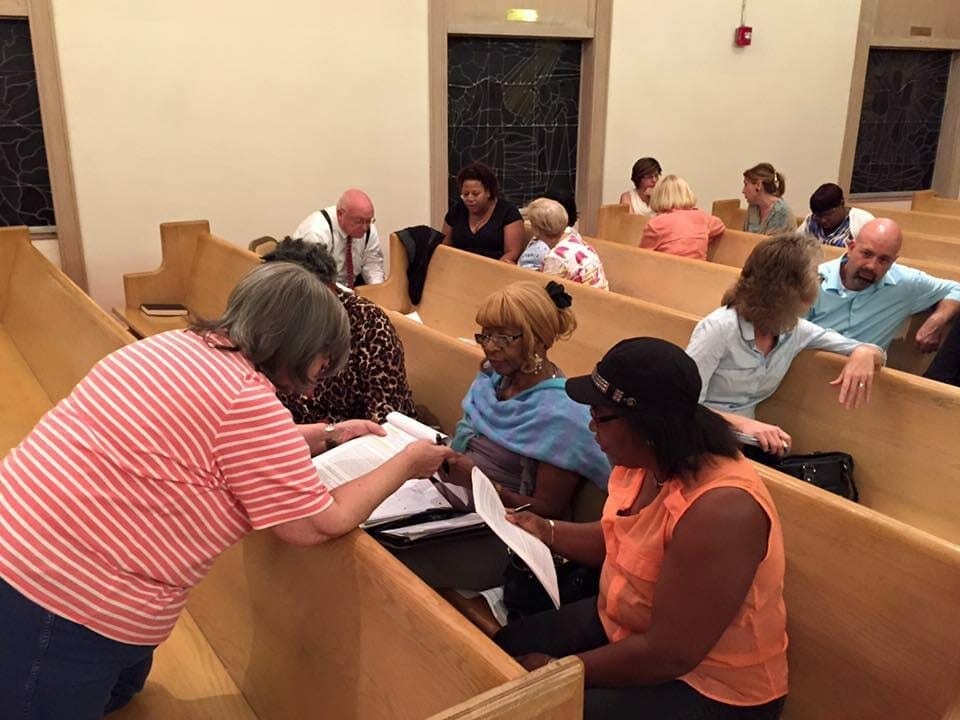 Luckily, county faith leaders have come together to find solutions to these massive problems. In 2007, a group formed called Broward Organized Leaders Doing Justice. BOLD Justice is an organization of religious congregations throughout Broward County, which are working together to solve critical community problems. The group’s website says it is “not a service provider, but a grassroots, direct action, multi-issued organization, which has come to be a powerful force for improving the quality of our community’s life.”

The group, comprised of members from 20 different congregations in Broward County, gathers its congregants from its various churches each year to discuss ways to address problems in the community and issues that can cause them.

During a meeting in April about 1,700 people got together to discuss some of the current issues affecting residents.

According to the website: “In Broward County 54,000 people are unemployed. Some areas of the county have unemployment rates as high as 28%. This presents a challenge for parents trying to feed their families and stay in their homes.

“Broward County gives out around $600 million worth of contracts every year,” Anderson says. “We have more than 67,000 people unemployed here. But there is nothing that requires companies to consider Broward Citizens in their hiring process. That needed to change.”

“BOLD Justice pushed for over two years to get the Broward County Commission to pass the “Workforce Investment Act.” This ordinance stipulates that company receiving a county contract worth $500,000 or more is required to: 1) for a period of 5 days exclusively interview Broward County residents (after that time they can interview whomever they want), and 2) make a good faith effort to fill 50% of new positions with people traditionally “hard to hire.” Hard to hire includes: veterans, people who are economically disadvantaged, long-term unemployed, people with felony convictions, people who did not graduate high school, people who have been homeless for the last 6 months, and people with a mental or physical disability.

“After two-and-a-half years of pushing from BOLD Justice, The Workforce Investment Act was voted into law at the April 8, 2014 County Commission meeting. The new policy went into effect January 1, 2015 and has already impacted $230 million worth of county contracts.”

“When I was in school, if you acted out you were removed from the classroom,” says Anderson. “Now, we have school resource officers in the schools and if they get involved in a disciplinary situation, the child has an arrest record. I don’t think the police officers have ill intent, they are doing their job but an arrest record can impede a young person’s future.” he says.

A major goal of BOLD Justice is to create an awareness of problems in the community and to get faith groups involved.

“I want people to love beyond their comfort zone. We are saying to people that we care about you and what is happening to you even if it is not affecting me,” Anderson says.

BOLD Justice is currently working to make improvements in mental health institutions, nursing homes and senior care facilities. “There is a problem of neglect in these facilities and we want to address this issue,” says BOLD Justice member John Strang.

Presently, 20 congregations and groups with over 30,000 members are members of BOLD Justice. They come from all parts of Broward County, and represent a diverse mix of African American, Anglo, Hispanic, Haitian, and Islander persons, coming from different religious traditions, including Catholic, Baptist, Lutheran, Jewish, United Methodist, AME and Presbyterian.

To learn more about BOLD Justice or to get involved, visit the group online at http://thedartcenter.org/location/bold-justice-10/ or call them at 954-463-2322.