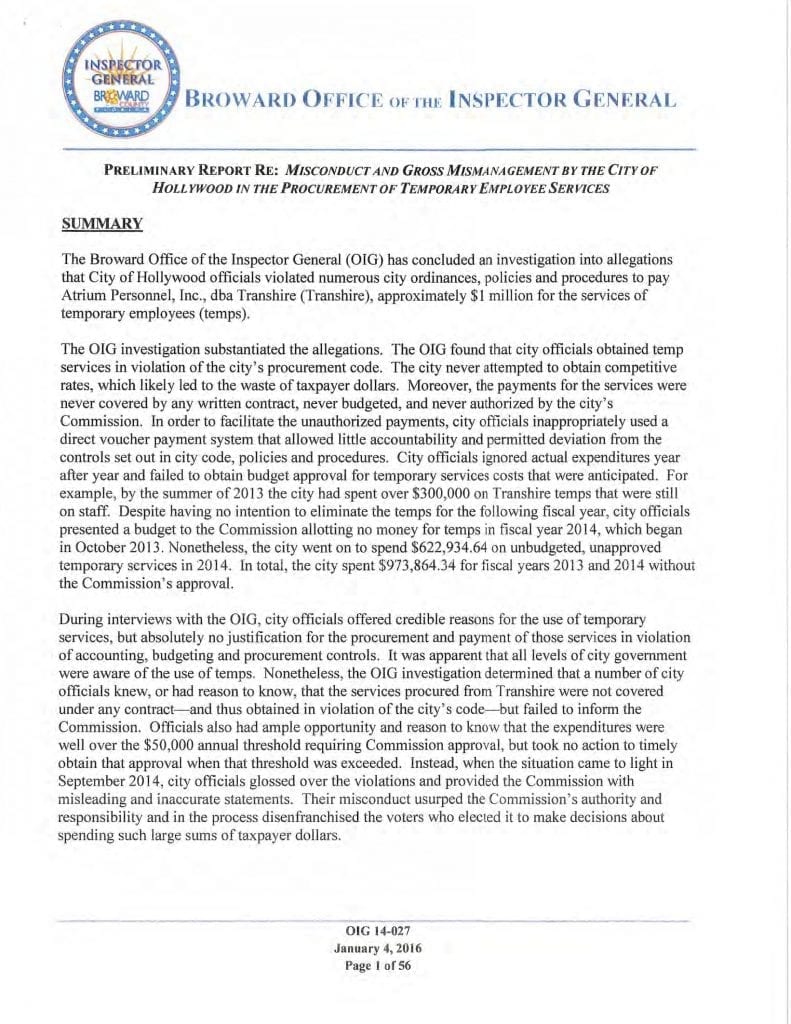 The Hollywood Commission held a special meeting this week to discuss a 56-page preliminary report by the Broward Office of the Inspector General (OIG) regarding TransHire, a South Florida staffing agency that was paid nearly $1 million from 2013-2014 on unbudgeted, unapproved services.

The OIG report found that City of Hollywood officials violated city ordinances, policies and procedures.  During the meeting, residents expressed disappointment in the findings of the report and called for reforms in city administration. Residents claim they feel misled and that this incident has impacted their trust in city government overall.

Mayor Peter Bober said the findings in the OIG report were indefensible. “I see willful indifference to our codes,” he said.

“The city never attempted to obtain competitive rates, which likely led to the waste of taxpayer dollars,” said the report from the Inspector General’s office that went on to name seven city officials involved in the violations.  “In total, the city spent $973,864.34 for fiscal years 2013 and 2014 without the Commission’s approval.”

To facilitate the unauthorized payments, city officials inappropriately used a direct voucher payment system that allowed little accountability and permitted deviation from the controls set out in city code, policies and procedures. The officials ignored actual expenditures year after year and failed to obtain budget approval for temporary services costs that were anticipated.

Bober called for the hiring of an internal auditor who would be hired by and responsible to the Commission.

Commissioner Kevin Biederman asked if the former Hollywood City Manager, Cathy Swanson-Rivenbark, now the city manager for Coral Gables, could be retroactively fired.  “It is clear that the former city manager lied to us. I think there should be criminal penalties for those who deliberately deceived the Commission,” said Biederman.

He asked that a complaint be sent to the International City/County Management Association regarding her handling of the TransHire situation. The Commission voted in favor of sending a complaint.

Commissioner Linda Sherwood said she believes mismanagement took place especially in the human resources and finance departments and recommended that the City of Hollywood have a forensic audit conducted.  And Commissioner Traci Callari said she believed that the city officials involved had violated the trust placed in them by the Commission.

Vice Mayor Peter Hernandez spoke out about the report during the recent meeting. “I am appalled. This is worse than what I thought it was going to be and I am dumbfounded by what I read. Based on what I read, there are some people who need to go. They violate the trust of the Commission and the people and remain,” said Hernandez.

Hernandez called for the firing of City Attorney Jeffrey Sheffel. He did not get support from the rest of the commission.  Under the City Charter, only the City Manager, City Attorney and Community Redevelopment Agency director are hired and can be directly fired by the Commission.

Hernandez believes Sheffel should be fired because he no longer trusts him. “To me it is a trust issue. The City Attorney should have alerted us that something was going on and not tried to gloss it over. It is one thing to make a mistake but it is another thing to try to cover it up.”

According to a memorandum from current City Manager Wazir Ishmael, the city has initiated several reforms since the unauthorized expenditure of funds for temporary services was brought before the commission in September 2014. Human resource policies regarding the use of temporary staffing services have been strengthened:

The Direct Payment Voucher form has been reviewed to ensure the appropriate use of this payment method; additional signatures are now required for purchase orders and blanket purchase orders to enhance oversight; increased training for employees involved in the procurement of goods and services has been instituted; a contract compliance officer was hired and a master contract list of all city contracts for goods and services has been compiled; improved processes for contract management and compliance are being analyzed for implementation; and a review of the city’s human resources policies and procedures and departmental polices is underway for sufficiency and compliance.

Ishmael said he has reviewed this report and discussed the preliminary findings with the city attorney and some members of his management team.

“We will be working with an external, independent, professional with expertise in critical incident intervention and policy development to evaluate the results of the OIG’s investigation; assess the reforms the city has already put in place; and provide recommendations for any additional changes needed to prevent future policy violations,” Ishmael said in the statement.