5 vie to be Hollywood’s next mayor 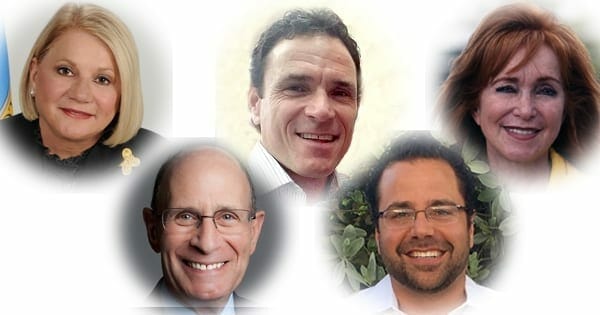 The race for Hollywood’s next mayor includes two city commissioners, a state senator, a planning and development board member and an uber driver who has never shied away from criticizing city government.

The campaign field got crowded when Mayor Peter Bober, who defeated Mara Giulianti in 2008 to become Hollywood’s youngest mayor at age 35, announced in late August that he would not plan to seek re-election when his term ended in November.

Here is a brief look at the five mayoral candidates:

Hollywood District 1 Commissioner Patricia Asseff is running for Mayor of Hollywood. She has been a member of the commission since 2008 and has lived in the city for 48 years. She has been in the real estate industry for 30 years and owns a real estate company. She believes her experience on the commission has given her valuable insight into the internal workings of the city.

“I believe we need to beautify the city’s neighborhoods. We are an older and built-out city. I see a great deal of potential for Hollywood and I believe it is important that we bring more businesses to the city. We need to revive the city’s downtown section,” Asseff said.

She believes that as a mayor she can be effective in improving the city’s financial situation. She believes in the city’s employees and would like to see them receive better salaries. “We have great employees,” she said.

Asseff is also concerned about the amount of flooding taking place in the coastal areas. She wants to take steps to protect the properties along the beach from encroaching tides. “I want to protect our city against rising tides and coastal flooding,” she said.

“I see great potential for the City of Hollywood,” said Asseff. “I want to improve our economic base and bring in more commercial entities on our corridors.”

District 4 Commissioner Dick Blattner began serving on the Hollywood City Commission in 1994, taking 7 years off from 2000 to 2007. After 23 years, he retired from Suncoast Marketing as a manufacturer’s representative, which he owned and operated.

“I have been effective at bringing ideas and projects forward and I will continue to do that as mayor,” said Blattner. “There are a lot of things in the works for economic development. I want to make the sure the Beach CRA stays intact and that it continues to make the beach spectacular. I also want to work to improve the property values in Hollywood.”

about spending. He wants to monitor collective bargaining agreements and make sure they don’t increase pension liabilities.

Blattner is also chairperson of the Broward Metropolitan Planning Organization, a position he has held for seven years.

Itzhack Feldman has been a Hollywood resident for nearly 25 years, raising his two children in the city. He was born in Israel

and served in the Israeli Navy.

Feldman is a cable television producer by profession as well as an Uber driver. He strongly believes in the Uber rating system for drivers and passengers and would like to see the same rating approach applied to Hollywood city employees.

“If a city employee’s rating falls below a certain level, they would receive counseling. If they don’t improve, they would be fired,” said Feldman. “With my involvement with Uber I see how much power we can have over the government. When we don’t like something, we the people have the power to change it.”

Critical of city government, Feldman said he has received a warning from the city attorney’s office to stay away from government buildings because city employees feel threatened by him.

“I want to learn as much as I can about Hollywood and the city is blocking me from doing so under a threat,” said Feldman. “They want me stop entering government buildings.”

Feldman says on visits to Hollywood government buildings and offices he has witnessed city employees doing very little work and spending more time socializing or talking on their cell phones. He also believes that too many city employees live outside the city and are unwilling to stay after work to help residents, especially those who want to use recreational facilities after 5 p.m.

Lifelong Hollywood resident, planning and development board member and local attorney Josh Levy, “wants to make Hollywood a great place to live, enhance the business corridors and brighten the neighborhoods,” he said.

He emphasizes the importance of working with the Broward County school district to improve the city’s public schools. Levy would like to see the development of K-8 schools in Hollywood. He believes promoting the city’s geographic advantages to corporations will bring more businesses to the city, which will provide more tax revenue that can be put toward municipal improvements.

Levy is also very concerned about the rise in sea level and wants to take steps to protect residents and beachfront properties from much higher tides and the general increase in sea levels.

“It’s time to take action in Hollywood. It’s time to improve neighborhoods. It’s time to promote and support our public schools so we can continue to attract and retain families in our city. It’s time to get things done for our residents, to protect our property values and reduce city taxes and fees through new

economic development opportunities. It’s Hollywood’s time to shine and I will be the mayor with the energy and skills to take us there,” Levy said.

Florida Senator Eleanor Sobel has been a Florida Representative, school board member and served on the Hollywood City Commission. But due to term limits, she cannot run for the Florida Senate in November 2016.

Sobel says she wants to be Hollywood’s mayor because she knows the city well and will listen to people with an open mind.

“I love Hollywood. It is my hometown having lived and worked here my entire adult life,” Sobel said. “I am coming home to make Hollywood even better than it is now by bringing the government closer to the people, revitalizing neighborhoods, and bringing people and their communities together.

“Having learned in the past 24 years how to understand people better and having had lots of successes, I believe I can take these skills to my hometown,” she said. Sobel added she has an open door policy.