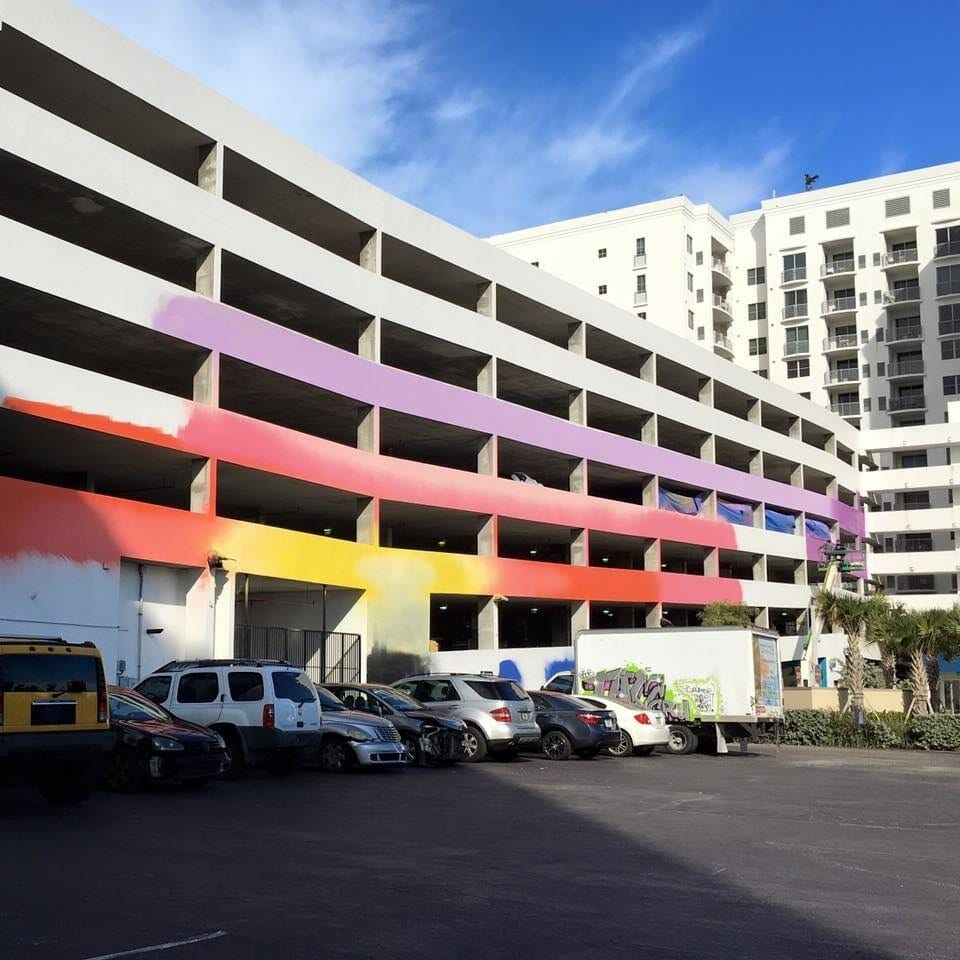 One of four artists to install an exterior mural in the Downtown area this year, this is the first time the Miami-born duo will showcase their work in Hollywood. The sisters will be painting a large-scale mural of a sunset. The installation began on Feb. 8 and is expected to take several weeks to complete.

The TM Sisters’ work spans mixed media collage to site-specific interactive video performance and everything in between — installations, fashion, social experiments, events and performances. “We’re experimenting all the time; we love to play and collaborate,” Monica told ArtStreet Miami. “We balance each other off.”

Described by the Miami New Times as “techno tropical,” their work is immersive and colorful and influenced by South Florida’s landscape — cultural presence, energy, weather and its colors. Voted “Miami’s Best Artist” by the Miami New Times in 2012, the TM Sisters have shown in exhibitions both locally and internationally, including the Serpentine Gallery in London, the Second Moscow Biennale of Contemporary Art and Performa ’07 in New York. Their work has been featured in The New York Times, The Guardian, Vogue Italia, STEP Inside Design, L’official and on the cover of ARTNews for its 2007 “25 Trendsetters” feature article.

The TM sisters display their color chart + rendering of the new ?mural at the Radius Garage (251 N. 19th Ave.)

“Street art is not only bringing creativity, aesthetic beauty, and civic and ethnic identity, but also revitalization to Downtown Hollywood. We’re proud to have the TM Sisters be a part of that; after all, they do great work,” said Jill C. Weisberg, project manager/arts specialist for the Hollywood Florida CRA. “Taking something that is so non-descript as the Radius Garage and turning it into something people are going to be excited to see is talent. Monica and Tasha, along with the other artists who have been involved in the project, are beautifying the city in unexpected ways.”

Launched in August 2012 by the Hollywood Community Redevelopment Agency (CRA), the Downtown Hollywood Mural Project is the largest walkable mural project in Broward County. DHMP is a key element in the CRA’s arts-focused initiative to enhance diversity and vibrancy in the Downtown area and features renowned local, national and international artists.

For more information, contact Debra Kronowitz at 954.568.2100 or via email at debra@ambitmarketing.com.