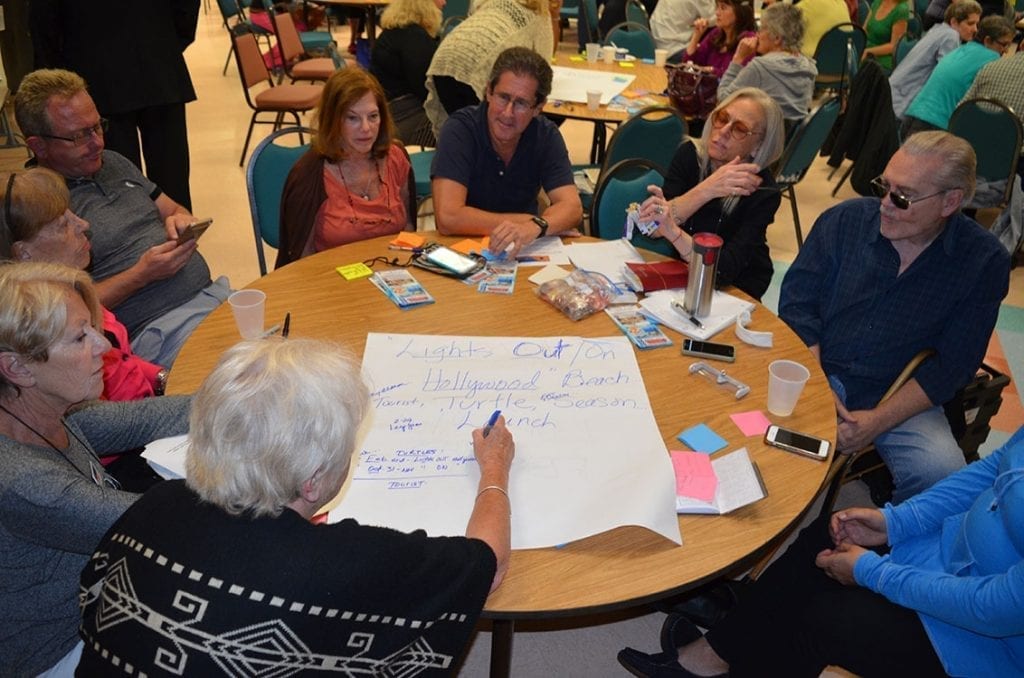 Hollywood leaders and concerned citizens got together February 29 to discuss the vision for the future of Hollywood. The evening meeting took place at the Hollywood Beach Culture and Community Center. It was very well attended and the excitement in the room was palpable.

The framework for the discussion was presented as four pillars of a sustainable city:

photos courtesy of City of Hollywood

During the meeting, members of the community had an opportunity to discuss how they would like the City of Hollywood to continue to develop. Some common goals were to make the city a more fun place to live, work and play. People said it was important to allocate more money for city parks and arts. The point was made that cities should spend more for fun items rather than just focusing on infrastructure repairs like fixing potholes.

Some of the benefits that Hollywood enjoys include beaches, a community feeling and a vibrant downtown. It is a place where people want to be. People at the meeting hope to improve on these areas. Concern was raised that it might be hard to raise enough money to make improvements to the city and there would be political conflicts that would have to be resolved.

People hope to make improvement to the City’s schools, public services and youth programs. Also, efforts should be made to improve the City’s corridors.

People were asked to say why they loved Hollywood. Answers ranged from how much they loved the tree canopy, to the City’s diversity, the parks and other recreational amenities and concerts at the ArtsPark.

Commissioner Traci Callari liked what she saw at the meeting. “I think it was a great step in the right direction. I want Hollywood to be the best city,” she said.

City Manager Dr. Wazir Ishmael said the meeting was a good opportunity to get people together to chart the course of the City.

People took part in multiple exercises. They came up with T-shirt designs as one exercise. They were asked if given $500, how they would spend the money to make their city or neighborhood better. An idea included having a dog parade on the Broadwalk, another idea was “Rainbow Traffic Circles.” The concept was that each lane at Young Circle would be painted in a different color to help the flow of traffic. One idea was to have a coffee shop in the library. The favorite idea was known as “Glow in the Dark Sea Art.”  Wooden sea creatures would be spray painted with glow in the dark paint and people could see these creatures at night. The group that proposed this idea received a $500 grant to make this a reality.