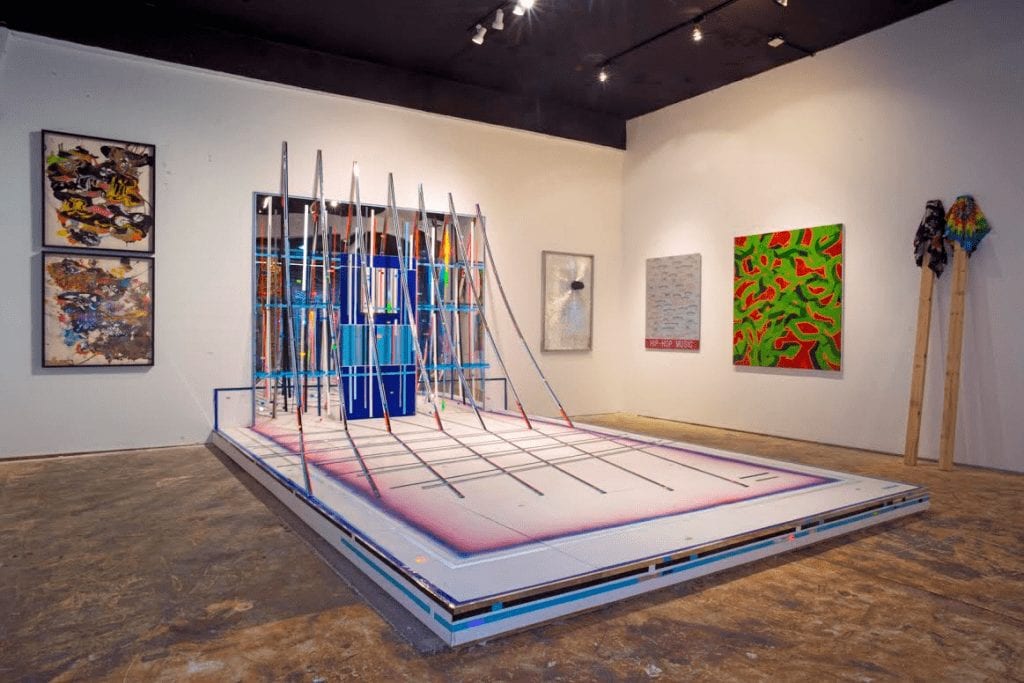 Hart has worked with countless artists over the years. Many of whom have have had a lasting impact on her both personally and professionally, including: Doug Aitken, José Alvarez (D.O.P.A.), John Baldessari, Elisabeth Condon, Gregory Crewdson, Mike Kelley, Dave Muller, TM Sisters, Wayne White and Andrea Zittel. “Each of these artists have produced work which over the years continues to inspire me due to the subject matter they focus on, which I find in sync with my own interests and taste,” said Hart.

An avid art lover as far back as she can remember, Hart says working with artists is an intimate process. “To a great extent the art world is all about relationships, so it’s important for artists, especially as they are embarking on a career, to get out, meet other artists and gallerists – visit various museums such as NSU Art Museum Ft. Lauderdale, Norton Museum of Art in West Palm Beach, PAMM and the I.C.A. In Miami. Go out and see as much art as you can.”

“I have witnessed some exciting changes in the South Florida art community,” said Hart. “Our region has an impressive array of artists working in every media, and there are some excellent galleries and institutions that support this talent.”

During her 30 plus years of experience in art, Hart has partnered with many local and international galleries, and has managed several young artists to stellar careers in the contemporary art field. “I’ve been very fortunate to collaborate with such an incredible number of artists, not only in South Florida, but also Los Angeles, NYC, and London. As an artist myself, I am mindful of the needs of other artists’ creative process, as well as the logistics involved in putting together successful exhibits.” Hart senses this has been mutually rewarding for herself and those she has worked with.

“I was invited to curate for an alternative space in Los Angeles in 1993. Then when I moved back to South Florida to be closer to family, I found an opening at the Art and Culture Center of Hollywood for Exhibit Curator.”

During her tenure there, many exhibits were provided funding by FAB! (Funding Arts Broward). “Most notably among these shows were two that received the FAB!/Knight New Work award. The groundbreaking exhibit of vernacular photography ‘Artist Unknown/ The Free World’ had a book accompanying it, produced by Gean Moreno’s Publications. And the other award went to the exhibition of Los Angeles artist Dave Muller, who used the funding to create a major, multi-media site-specific show, as well as one of his signature ‘Three Day Weekend’ events.”

While there are a number of galleries and collectors that do nurture the talent we have in our region, Hart says more could be done to be supportive of artists in the development of their careers. “Over the past few years a number of exceptionally talented artists have departed to go to cities such as Los Angeles or New York, which offer a more vigorous scene in which to engage.”

Art Basel Miami Beach and Art Fair Week Miami have also had a huge impact on South Florida, including the local contemporary art community. “While a number of excellent local artists have benefited from the art fair phenomenon, there are many who get overlooked.”

In curating the multi-venue exhibition, 100+ Degrees in The Shade, Hart sought to bring attention to the artists who live and work here, as well as some of the alternative spaces which support them year-round. “There is no doubt that the high profile of the annual fairs has also attracted a greater number of international artists to South Florida, whether it be for residencies, exhibits, or relocating here.”

Hart believes the most dynamic shift in the South Florida art scene is happening in the area historically referred to as Lemon City, (which includes Little Haiti, Little River etc.). “A number of galleries have opened and/or moved to this area including GUCCIVUITTON, Emerson Dorsch, Mindy Solomon, Anthony Spinello, Gallery Diet, and others.”

There are also a good number of artists that have their studios in this neighborhood (many located at Fountainhead Studios), including The Laundromat – a complex of artist work spaces and gallery. “Combine that with the gentrification in the area by various developers and I see this ‘neighborhood’ potentially blossoming into an area with much appeal for those interested in art.”

If there is anything about Hollywood’s art scene that Jane would like to change if she could, it would be having some additional galleries to showcase more artists.

“I think Jill Weisberg’s efforts working with the Hollywood CRA, to create various artist murals, have been a wonderful addition to the Downtown area. It would also be beneficial to see more artists living and working in Hollywood. I think Hollywood has the potential to be a competitive hub for the arts.”

Hart notes some exceptional artists including: Virginia Fifield, Sri Prabha, Peggy Levison Noland, and Pip and Duane Brant, are already here. “I would imagine as Hollywood has a lower cost of housing and work space, that could attract more artists, which would be a positive change.”

Another way to enrich our Hollywood’s cultural landscape is if more resources are devoted to non-profit exhibition venues.

“The multi-venue exhibition I curated, 100+ Degrees in The Shade: A Survey of South Florida Art, was a one time project that was done to showcase the wealth of artistic talent in our region.”

The endeavor was produced without any grant funding and a 220 page, full color hardcover book included texts by art historian Erica Ando and critic/curator Sandra Schulman. The massive six month effort to manifest this project involved the generosity and cooperation of many individuals. Over 170 individual artists, working in every medium, were included in the show. “It was a labor of love on my part and a way of acknowledging so many artists here in South Florida who have inspired me.”

What’s next for Jane?

“I am curating three exhibitions to take place in the fall of 2016 at the Paul and Lulu Hilliard University Art Museum, University of Louisiana, Lafayette. All three shows will focus on the genre of portraiture. There will be a solo show of works by Francie Bishop Good, from her ‘Comus’ series of digitally altered, vintage high school yearbook photos. There will also be an exhibit of studio portraiture by NY based artist Oliver Wasow. In the largest of the museum’s three galleries will be a group exhibition, focused on various approaches to portraiture by Louisiana based artists working in a variety of media.”

In the meantime, Hart is enthusiastic and open to invitations to work as an independent curator. “Organizing exhibitions and special projects is what I most enjoy.”