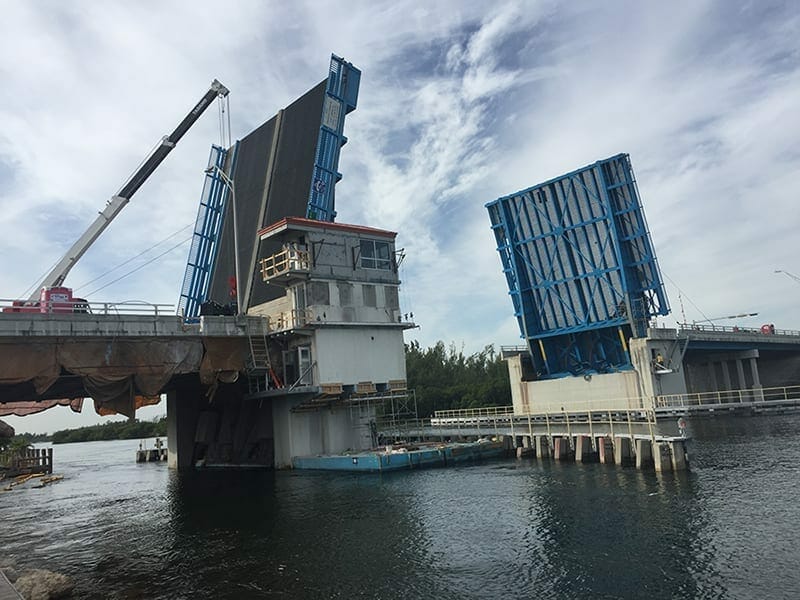 The reopening the Dania Beach Boulevard Bridge over the Intracoastal Waterway to vehicular and pedestrian traffic was scheduled for April 20, 2016, Florida Department of Transportation officials announced. The bridge has been closed since January 12, 2016 as part of a $5.75 million mechanical, electrical and structural renovation project.

“Due to on-going repairs the Dania Beach Boulevard Bridge over the Intracoastal Waterway will not be able to reopen to traffic under its own power,” the Florida Department of Transportation (FDOT) announced late this afternoon. “There is currently one crane on the bridge that will be used to manually raise and lower the span on the east side of the waterway. FDOT and our contractor, Quinn Construction, Inc., are working to locate a second crane to manually move the west span. FDOT anticipates re-opening the bridge soon.”
When both cranes are on site they will be placed in the center lanes, allowing the bridge to reopen to one travel lane in each direction, between 7 a.m. and 7 p.m. The bridge will be closed to vehicular and pedestrian traffic overnight until the bridge machinery is fully operational. Both bridge spans will be placed in the upright position overnight.
The U.S. Coast Guard has authorized single leaf openings of the bridge to vessels every hour, on the hour, during the 7 a.m. to 7 p.m. window. Boaters must request a double leaf opening at least four hours in advance by contacting Quinn Construction at (941) 722-7722.
This work is part of a $5.75 million mechanical, electrical and structural renovation of the bridge which began in October 2015. The bridge has been closed to vehicles and pedestrians since January 12, 2016.
The bridge frames and mechanical components were removed from the bridge in January and taken to the contractor’s machine shop in Palmetto, FL for repairs. This work took longer than originally anticipated due to the excessive wear and corrosion that was not visible until the equipment was disassembled. These large components were delivered to the bridge Thursday, April 7 and installation of the frames and equipment began Friday, April 8.
For more information about the project, please contact project Public Information Officer Casey Liening at 954-940-7585 or [email protected].
Stay Connected
Like Us On Facebook
Follow Us On Twitter
Newsletter