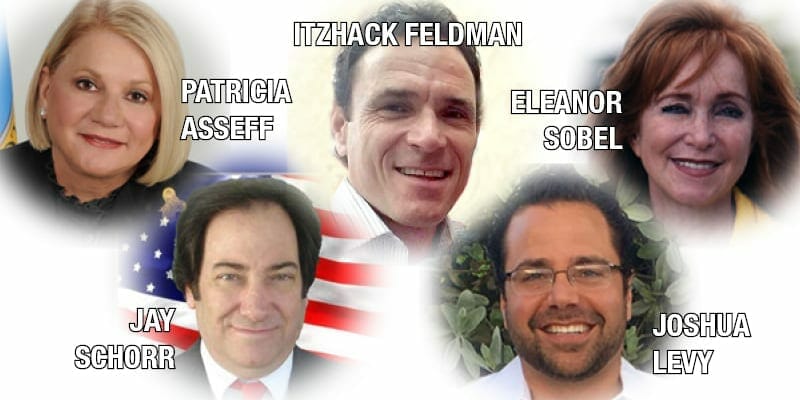 Hollywood recently picked up two new candidates for mayor.   One is a marketing and advertising “visionary” and the other won’t be on the November ballot.

Irma Tessa Paul withdrew from the race May 9 due to a family crisis. “At this time my focus is my family,” she said.   “I have great love for the city of Hollywood and I wish the mayor elect great success.”

Jay Schorr is the newest contender joining Patricia Asseff, Itzhack Feldman, Joshua Levy and Eleanor Sobel. Commissioner Dick Blattner pulled out of the race in February and is seeking re-election in District 4.  Seats up for election this year are mayor, and commissioners for districts 2, 4 and 6.

Commissioner Asseff submitted her resignation for District 1 effective November 22, 2016.  A special election will be held to fill the unexpired term for the District 1 Commissioner on November 8.

Get to know Schorr with his answers to Hollywood Gazette’s questions below:

Q: Why have you chosen to run for mayor of Hollywood?

A: Hollywood is a city where gross financial mismanagement, an increasing crime rate, lack of a coordinated redevelopment plan and other problems reign supreme.  These problems are symptomatic of incompetent, unresponsive city officials who lack the requisite foresight and capabilities to make Hollywood a true Diamond of the Gold Coast.

As a citizen of Hollywood, I want to help make our great city the best that it can possibly be for those who live, work and play here.  Hollywood deserves nothing less.

Q: What are your qualifications, experience in government and professional background?

A: I am a renowned visionary in the fields of marketing, advertising, entertainment and government.  As a writer, I created a national advertising campaign for Kmart, written books represented by some of the world’s most famous literary agencies, and created an initiative-based system by which citizens can enact their own laws.  I want to take that initiative-based system – which gives voters direct input into the law-making process – and implement it in Hollywood.

Q: How long have you lived in Hollywood and in what neighborhood?

A: I first moved to Hollywood more than 30 years ago, where my wife and I lived in a condo on A1A north of Sheridan Street.  After some years of living outside the city, we moved back to Hollywood four years ago where we reside in the Hollywood Lakes area.

Q: What do you love about the city?

A: I love the city’s understated elegance; it’s sleepy, yet, vibrant feel.  Hollywood is a hidden jewel nestled between its urban neighbors to the north and south.  Its beautiful beaches, quaint downtown and eclectic architecture are a study in contrast and diversity.

Q: What are the most important issues facing the commission right now?

A: The commission – or more precisely its dysfunctional nature – is the most important issue facing our city today.  Without a cohesive, ethical and competent legislative body, none of the city’s pressing issues can be satisfactorily addressed.  Whether it be financial oversight, smart redevelopment, crime reduction, encouraging commercial investments and/or raising the quality of life for all city residents, it all starts with a responsive city government.

Q: Anything else you think is important for Hollywood voters to know about you?

A: I am a visionary with a proven track record of success.  I am NOT a politician.  I am an outsider who is not going to tolerate the status quo.  You can never change things for the better by keeping the same policies and mindset that led to the problems.  The citizens of Hollywood have made their voices clear:  It is time for a major change at City Hall.  I am that change.