Local barbershop 'a cut above the rest' since 1946 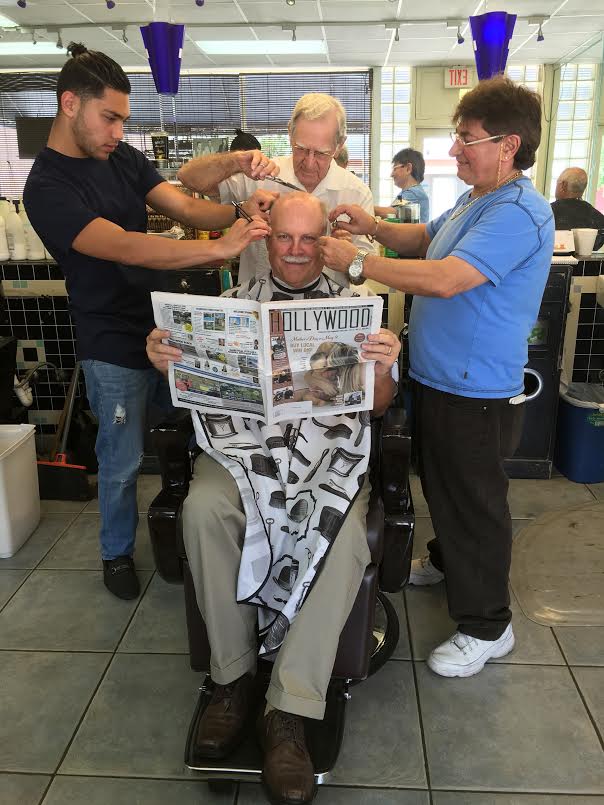 Established in 1946 and currently owned by native New Yorker Phil Fuchs, who has been living in Hollywood for 30 years, Downtown Cuts is just one of those gems that helps give Hollywood its magic.

“I basically stumbled into Downtown Cuts because the small-town exterior of the shop seemed to indicate that the interior would have the same feel,” states John Lannert, a shop regular pictured above.

“Indeed, the interior with vintage photos, license plates and traditional barber stools makes the customer feel like a throwback. But there is a mix of young and old barbers, so any type of customer would feel at home.”

Part of the shop’s hometown feel is the all-star crew Fuchs has on board-including his 21-year-old son, Sammy, and 89-year-old Dewey LaPorte.

“I didn’t know Dewey when I bought the salon,” shares Fuchs, “but I kept him on. He came with the purchase and we get along great. He has loyal clients, as well.”

LaPorte, who just turned 89 this past Valentine’s Day, started working for the shop in 1956.  “After a while, I bought it. It was called Palm Barber Shop back then,” recalls LaPorte. “Then I sold it about 20 years ago.”

But that didn’t stop him from being a mainstay.

“Dewey is a meticulous barber,” states Lannert. “There’s not a hair out of place when Dewey finishes a cut.”

Lannert, who moved here from Louisville, Kentucky last July with his wife, Guilianna, and mom, Audry, was looking for an old-school barber shop. “Once I met Dewey, I’ve been going to him ever since,” he says. “I was also interested in his Cajun ancestry and historical knowledge of Hollywood.”

Lannert is an active member of Hollywood Historical Society and graciously helped contribute information for this story.

A Little about Dewey

Born in Louisiana, LaPorte is a Korean War vet who met his wife, Jeannette, when he was stationed on the Destroyer in Newport, Rhode Island. After Jeannette graduated from school, the couple married and started a family. They moved to Florida in the ’50s when Jeannette’s father started suffering from heart conditions.

“We had another girl and boy born at Memorial Regional Hospital when it was only three stories high,” recalls LaPorte with a subtle hint of his native accent.

“My children went to Hollywood Hills Elementary, Olsen Middle School and South Broward High. We enjoyed raising our kids and now enjoy riding our boat up and down the Intracoastal and through Port Everglades.”

A Little about Sammy

“I thought it would be nice for him to work with me one day and it worked out,” shares Fuchs.  “We’ve been together for three years. He’s an excellent barber and he’s bringing in his own flavor.” Sammy specializes in beards and styling.

“For his age, he is something else,” states LaPorte.

If that’s not enough to reel you in, this charming bunch also speaks English, Russian, Hebrew, Yiddish, and ‘un poquito’ of Spanish!

“I love this location,” says Fuchs, who bought the shop six years ago. (Some may remember it as Sullo Wet Cuts.)

“There’s a lot of foot traffic here and parking is not an issue. I also have clients that followed me from my other shops (along Stirling Road and Griffin Road) from the past 20 years.”

“Hollywood is small enough to allow my 91-year-old mom to drive around town and still big enough for plenty of activity,” adds Lannert, who enjoys walks on the broadwalk with his wife, Guilianna and frequenting restaurants like Tarks of Dania Beach and the cozy cafe, Chocolada.

But when it comes to his hair, it’s always Fuchs and company.

“From a friendly conversation and the latest hair style from Sammy and Phil, or an old-school cut from Dewey, Downtown Cuts is the place to go.”

Downtown Cuts specializes in unisex haircuts and styling, hair straightening, Brazilian blowouts, hair perms and body waves, with consistently high ratings on Yelp and other review boards. Prices are affordable and they are open six days a week.

Hours are from 8am to 7pm Monday, Tuesday and Saturday; from 9am to 7pm on Wednesday and Friday; and from 10am to 5pm on Sunday.