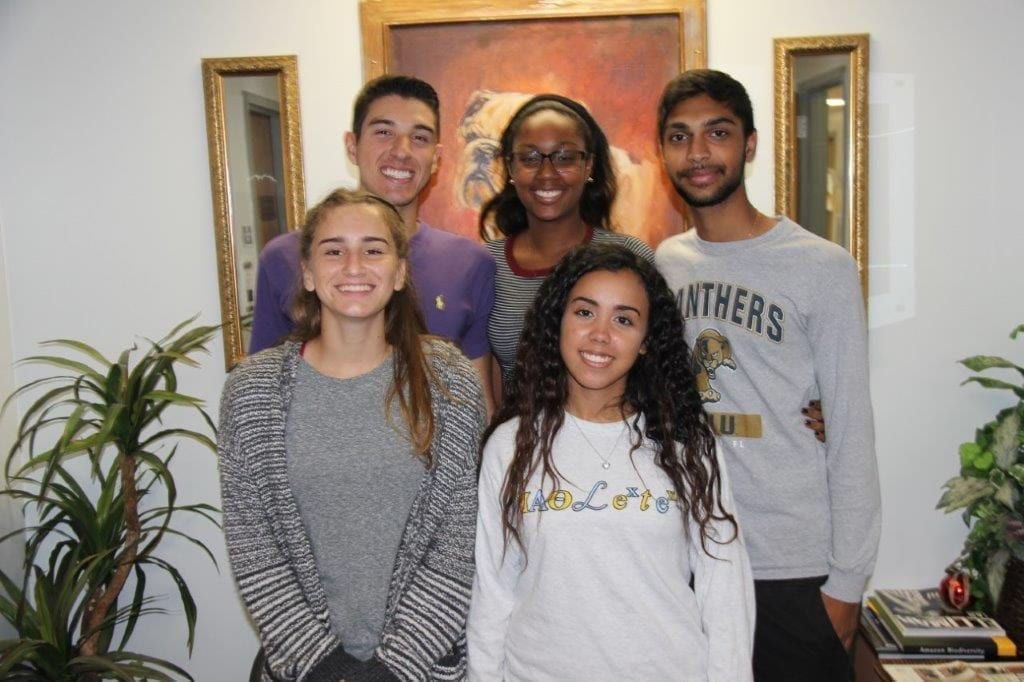 Now that the school year has come to a close, it’s important to recognize those exceptional students whose accomplishments go above and beyond the norm.

Amy Alonso is the valedictorian of Hollywood Hills High School. She has a weighted GPA of 5.0 and enjoys academics and studying hard. She has excelled in advanced placement classes.

Alonso was the editor-in-chief of the school newspaper last year and is a member of the National Honor Society (NHS). “As a member of NHS, I spent a lot of time tutoring students and participating in fundraising activities,” she said.

Next year Alonso will attend Florida State University, where she plans to study biology. “My goal is to go to medical school,” she said. “I may want to go into pharmacy or pediatrics. I also want to study abroad in Spain. I want to travel.”

Amy Alonso. She is the valedictorian at Hollywood Hills High School with a 5.0 weighted GPA. Bryan Long is the Cadet Battalion Commander for the Hollywood Hills Army JROTC program. He has the highest rank in the school’s JROTC.

Bryan Long, a junior at Hollywood Hills High School, is the Cadet Battalion Commander for the Army JROTC program, which is the highest rank in the organization. “JROTC at Hollywood Hills is a great program,” said Long. “It teaches you citizenship and leadership. This program has kept me on track and helped me pursue my goals. There is a strong emphasis on maintaining good grades and doing well in school.”

Long enjoys being a leader, but has a gentler approach to managing other people. “I believe you need to show respect to the people you are leading. I don’t want to be hard on people. I have had a lot of support in this organization.”

Long is not sure what he wants to do after high school, although he wants to pursue training as a mechanic. “I may join the Army, but I’m not sure yet,” he said.

Jennifer Simu is the salutatorian at Hollywood Hills High School. She has the second highest GPA.

Jennifer Simu is the salutatorian of Hollywood High School, with a weighted GPA of 4.9. She loves to study history and government and hopes to become a lawyer in the future.

“My family has motivated me to do well in school,” said Simu. “We have faced some challenges and I want to do well so I can help them.”

Simu will attend Florida State University next year where she plans to study Criminology and Pre-Law. After law school she hopes to go into criminal law and eventually become a judge. “I care about people and I want to help them.”

Simu’s high school life has not been only about academics. She was the Student Government Association (SGA) president and senior class secretary. She was on the Student Advisory Committee. “I like being involved in school and helping other students,” she said.

Bridnny Vargas has the highest GPA in the Hollywood Hills Military Academy.

Bridnny Vargas has the highest GPA for the Hollywood Hills High School Military Academy, weighted at 4.71.

“I enjoy studying math and science, and I won the award for the highest GPA in Anatomy and Physiology,” said Vargas.

Next year Vargas will attend the University of Central Florida, where her goal is to get a nursing position at a hospital. She hopes the hospital will pay her tuition for her to attend medical school. “I want to become a doctor,” she said.

Vargas has enjoyed her experience in the Hollywood Hills High School Military Academy. She participated in the drill team, color guard and Raiders programs. She earned Superior Cadet and was Captain and Company Commander.

“I like to help people. I went to the Military Academy because I wanted the higher level of academics, she said. “I want to better myself.”

Valedictorian and Salutatorian at Chaminade-Madonna

Patrick Roberts is the Valedictorian at Chaminade-Madonna College Preparatory; he has a 5.23 GPA, and enjoys studying Physics and English. He was involved in the Student Government Association. He was president and co-founder of the Robotics Club. Roberts will attend the University of Florida next year where he will study Electrical Engineering. “I hope to get a Master’s Degree in Electrical Engineering. I want a job where I always have a challenge,” said Roberts.

Brandon Williams is the Salutatorian at Chaminade-Madonna College Preparatory with a GPA of 5.16. He was captain of the track team where he achieved success as a distance runner, and was a top runner on the cross-country team. He was also vice president of the Environmental Club and class treasurer for the Student Government Association. Williams will attend Florida Southern College next year where he plans to study Pre-Medicine.

Leandro Allende, a top basketball player at Chaminade-Madonna. He averaged 20 points and game will play for the Citadel next year.

Leandro Allende is one of the top athletes at Chaminade-Madonna College Preparatory. He was the captain of the basketball team which advanced in the playoffs. He averaged 20 points a game and will play for The Citadel, the Military College of South Carolina.

“I love to play basketball and I am looking forward to playing in college. I know the military college will be difficult, but it’s my chance to play for a top division college,” he said.

Allende also played on the school’s volleyball team as a setter.

Mariana Gomez is the Valedictorian of South Broward High School, and played on the school’s soccer team. She is looking forward to attending the University of Florida, where she plans to study genetic engineering.

“I enjoy academics and playing sports. It gives me a balance. I like studying Biology and I like studying Genetics. I want to earn a Ph.D. in Genetic Engineering,” she said.

Isabel Maria is the Salutatorian of South Broward High School. She also enjoys studying Biology and wants to pursue a career as a medical doctor, with an interest in Neurology. Next year Maria will attend Florida International University.

And South Broward High School has some successful young leaders. Prashant Patel was senior class president and treasurer for DECA. “I enjoyed planning and raising for events. I want to study Business Administration and Finance at Florida International University,” he said.

Sebastian Serna was Student Government Association President, Battalion Commander for the Army JRTOC Bulldog Battalion and captain of the Cross Country Team. “I love to help people and I enjoy student events. I have a desire for success and I want to make the world a better place,” said Serna. He will begin his studies at Broward College and will then transfer to Florida International University.

Gariel Lalanne was the treasurer for the Ebony Club, and a member of the Student Government Association and the National Honor Society, and was also involved in Mentoring Tomorrow’s Leaders. She wants to study Pre-Medicine at Florida A&M University.

“I really enjoy studying Anatomy, Physiology, and Chemistry,” said Lalanne. “I have enjoyed being a leader in organizations at South Broward High School,’ she said.

Daniela Molnar is the Valedictorian at McArthur High School. She graduated with a 5.18 GPA and is looking forward to studying Biology at Nova Southeastern University next year in preparation for medical school. Because she performed well in many Advanced Placement classes, she may be able to earn a Bachelor’s degree in around two years. She was active in the National Honor Society and Mu Alpha Theta math honor society, and was a member of the McArthur High School wrestling team and participated in a girls’ state meet.

Deziree Lara is another high achieving student at McArthur. Lara created a website to help students receive proper tutoring for academic subjects they were struggling in, for which she received the Silver Knight Award.Next year, Lara will study Mechanical Engineering at the University of Central Florida.