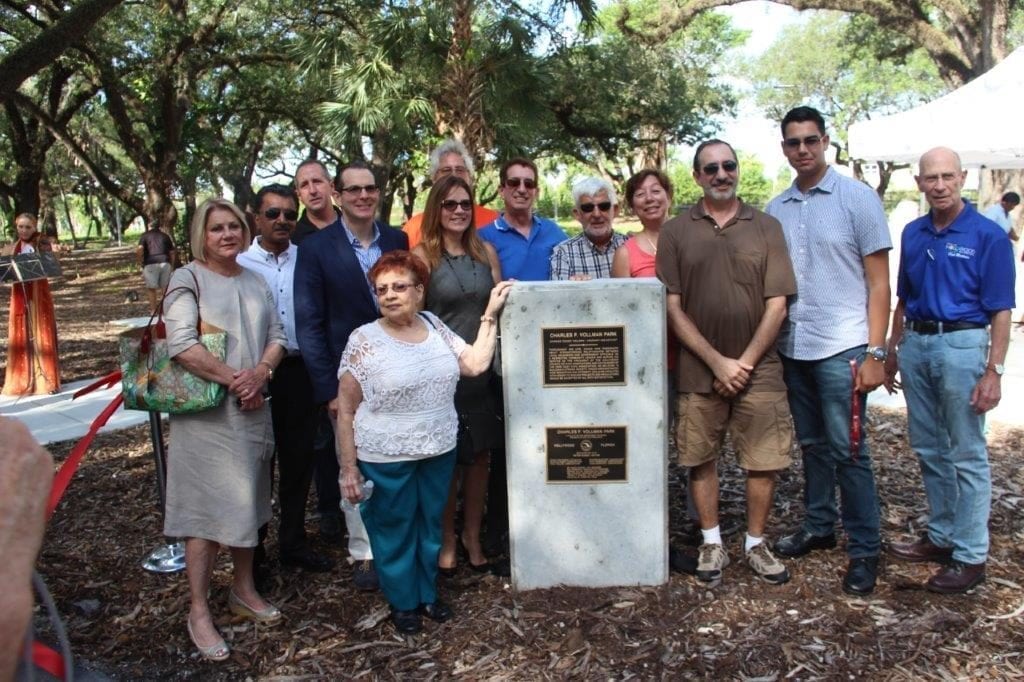 Pamela Vollman-Burgio was pleased to be a part of the dedication ceremony for the Charles F. Vollman Park. She is the daughter of Charles Vollman.

“I am very honored to be part of this,” she said. “My father was involved in the development of this area and he wanted a park to be in this area. He was unselfish and did not seek recognition.”

Marc Vollman, the son of Charles Vollman also participated in the ceremony. “It is an honor to be here. I am proud of my father. Hollywood is my city and I grew up here. I will use this park,” he said.

Mayor Peter Bober said, “I think this is a wonderful addition to Hollywood’s green space. It is one of the finest parks in the City.”

Commissioner Traci Callari said, “This park is a little piece of heaven. I plan to come to this park.”

Vice Mayor Peter Hernandez said, “It is beautiful. This park is serene and relaxing. It is a haven in the middle of a metropolis.”

Broward County Commissioner Beam Furr participated in the ceremony. He remembered working to ensure that the park would be developed during his time on the Hollywood Commission.

Karen Albertson, president of Hollywood Historical Society, said her organization worked to make sure the Rock House was not demolished. She is looking forward to seeing this house used to hold events.

This park is part of the development known as “Sheridan Stationside Village.” It includes a total of six acres, four of which are usable. The remaining two acres are for retention and detention, according to Chuck Ellis, director of Parks, Recreation and Cultural Arts.

It is considered a passive park with benches, drinking fountain, waste receptacles, bike racks, light poles and a concrete circuitous path. The site includes an old farm rock house. The developer contributed $50,000 toward the remodeling of the rock house a later phase. “We will use this building for a grant match and to assess what exactly the building will require to refurbish it,” said Ellis.

At one time, the land was used as a trailer park. The land has many Oak Hammock trees and is a perfect place to go and relax.

The park is located at 2933 Taft Street.