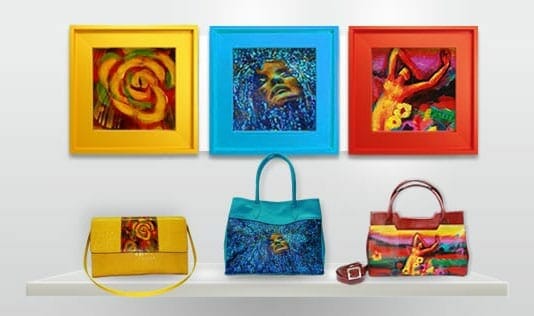 “People really like it and I get good feedback,” said White, a self-taught artist originally from Medellín, Colombia, who moved to the United States in 1988.

The painted handbags and clutches available at Art N Form are produced in Colombia and made of fine leather, inside and out, from Italy and Brazil. The vast selection of wearable art includes designs by Colombian artists Katalina Ospina and Henry White, Doris White’s brother.

It was Henry’s artwork that inspired Doris, then a hairdresser, to take up painting following a visit to Colombia. She first showed her work in 1999 at Art on the Boulevard in Fort Worth, Texas, where she lived. After selling her first painting, White became a fulltime artist and made a name for herself by hosting art shows in her home and displaying her work in art galleries. In 2009 White’s work was chosen for the advertising materials for the Jazz by the Boulevard festival in Fort Worth, and her painting was turned into posters, banners, flyers, T-shirts and bags.

After White and her husband Luiz Toledo moved to Hollywood late last year, she continued to paint and show her work far from home at a Delray Beach gallery. White is happy to share her new business with her spouse, a retired hand surgeon, who will stretch and frame the finished canvases in a room in the back while White creates in her studio.

“When people come in to see my art, they can see me painting,” she said. “It’s going to be wonderful.”

Motorists and pedestrians are likely to see a large sample of White’s work around town, as she plans to turn her Dodge Durango into a mobile masterpiece.

White said she is “very enthusiastic” about opening Art N Form in the historic downtown arts, music and entertainment district that is home to galleries and studios, the innovative ArtsPark at Young Circle, the Art and Culture Center of Hollywood, Cinema Paradiso art-house cinema and the Downtown Hollywood Mural Project (DHMP). Numerous cultural events include the free ArtWalk series presented by the City of Hollywood Community Redevelopment Agency (CRA) from 7 to 10 p.m. every third Satyrday, featuring a guided outdoor mural tour, live outdoor painting, entertainment and complimentary refreshments at participating galleries and businesses.

“I really like the murals. When I see them, I say, ‘This is what I want,'” White said. “Downtown Hollywood is on its way, and I’ll do whatever I can to help.”

There is no charge for on-street downtown parking between 8 p.m. and 8 a.m. Free on-street parking is available in three-hour increments between 8 a.m. and 8 p.m. Garage parking is available for $1 per hour at the Municipal Garages located at 251 S. 20th Ave. (between Harrison and Van Buren streets) and 251 N. 19th Ave. (between Tyler and Polk streets).