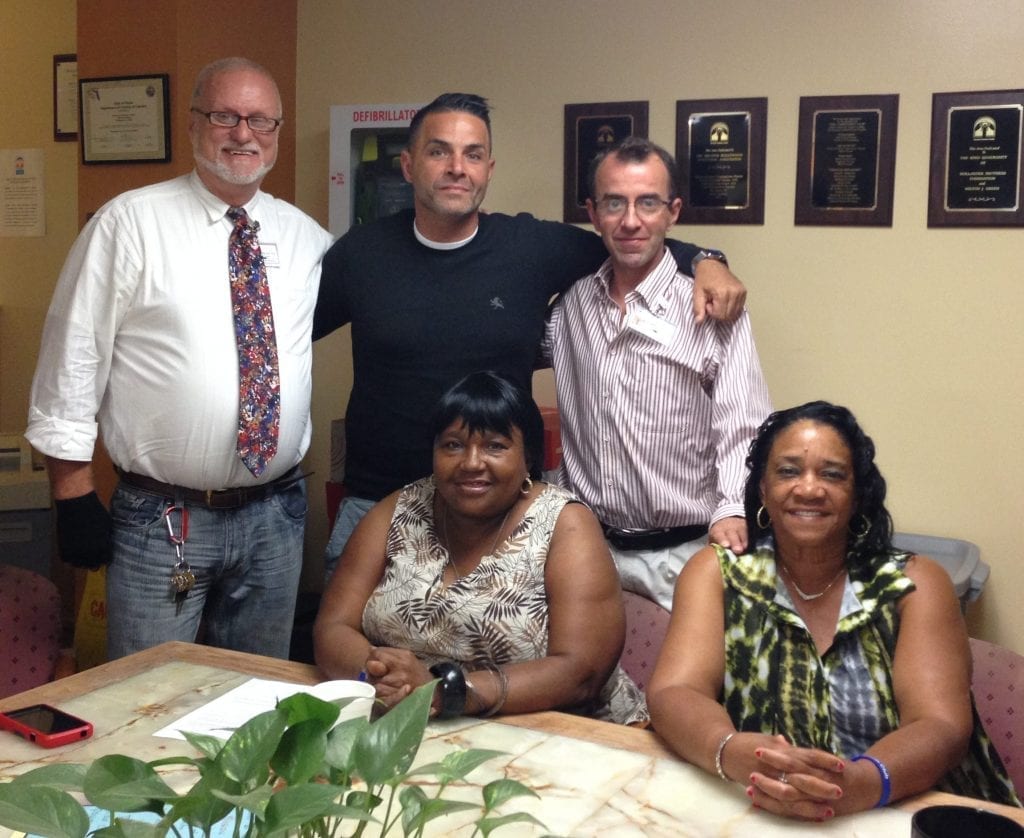 Every other Thursday at 5 p.m., a group of men and women who have graduated from the Broward Outreach Center’s programs meet to discuss ways to give back to the community. At this particular meeting, Don Cotton informs the group that they are a step closer to adopting several of the streets surrounding the shelter.

They plan to target individuals in the community as a way to give back to the taxpayers.

The group plans to go door to door, asking if there is anything that they can do to help. While they’re focused on giving back to the community as a whole, they are also focused on giving hope to those who are in the same situation that they once found themselves in.

The alumni group wants to be an advocate for those who cannot speak for themselves.

I was able to speak with the Broward Outreach Center’s alumni group about their own stories of experiencing homelessness and how their stories can help others.

Hollywood Gazette: How long have you been a graduate of the Broward Outreach Center (BOC)?

William Nutt: I’ve been a graduate for seven and a half months.

Jason Gillis: It’s been one year.

Pamela Fields: Six months for me.

HG: How long were you at BOC?

WN: Two months before I was able to be qualified for another program, which I am living at today.

CW: I was here three months before I was qualified for a rapid housing [program].

JG: I was here less than two months and Mr. Cotton helped me to get my own place through a
HUD housing grant. I have been in my own place for one year where I was homeless on the streets for six years.

HM: I was here for six months before I moved out on my own.

PF: I was here four months and [then] my housing came through Section 8.

HG: When did you originally start to experience homelessness and what led to it?

WN: Nine months ago I found myself down on Hollywood Beach ready to hang myself. I had lost all hope. I found out that I had two broken vertebrates in my back that I never addressed and they mended themselves, which was causing excruciating pain. The alcohol and the drugs wouldn’t work anymore. I asked God, “Please, Lord, do something. I can’t live this way anymore,” and I heard it just as clearly as I am speaking now: “God opened doors only you can close”. Two days later, Don Cotton allowed me to come back into this program. Everything changed. God did for me what I couldn’t do for myself. I have a 36 year old daughter and a 15 year old granddaughter that are a part of my life today and that means everything in the world to me. Don gave me a job here and I am working on my GED so I can work to become a certified substance abuse specialist one day.

JG: I experienced homelessness around ten years ago…I always had a key to a house and I never thought that anyone was responsible for taking care of things and I wasn’t really taught that, so when the people that were in my life were gone I started learning the hard way. Sometimes you don’t realize what you have until you lose it. [I lost my house] and that’s when I started getting caught up in the street stuff, the easy life, and what I thought was gonna benefit me in life and all it did was make me worse. It seemed like the more I became homeless, I became hopeless. It is really hard to see out of the hole when there is no one reaching out to you. That’s where BOC came in for me, when I was reaching out for this help, they extended their hand and that’s why I am here now.

HM: I came here from having two jobs and money, but I had to get away from my place. My friends were selling drugs; I didn’t want to be there…I came here. Fortunately, I bought a bike and a change of clothes…when I got down here, unlike what these people have been through. I have a lot of respect [for them]. I feel…little because I had it a little bit easier. I hate to even say that because I hear these people and what they went through and what they are going through. Everyone that comes in here is unique. When I first got here I knew that if I couldn’t get into the program I would be on the street…I never had to sleep under the stars except for in Boy Scouts, and that was in a tent with a sleeping bag and food (laughs).

PF: I worked for the Dade County school board and I had surgery. I had to be out for a year. I thought that I would be out for a couple of months and get to go back to work, but it didn’t happen that way. I couldn’t afford to pay my bills. What really made me homeless is that I didn’t have enough money to continue to take care of my bills. I had met my friend at a church who teaches classes [at BOC] twice a month and she told me about BOC. I cried the first day [at BOC] because I was saying to myself ‘how did I get in this predicament?’. Once I got here, after the first day, I was glad that I came.

HG: What would you say is the most common misconception that people have towards those experiencing homelessness?

JG: The biggest one for me is that ‘oh, there’s places out there’. Like, they could get some help but they don’t want help. They don’t realize that the community that views [homelessness] is the community that can help it. It is everyone’s responsibility as a community and as humanity to help. Society kind of teaches us to be like ‘get a job’ rather than ‘how could I help in some way’. We aren’t any different than you. I’ve been in [BOC] with people in med school, people who were lawyers at one time, who were computer engineers, and then I started realising that homelessness is not a mentality, it is a part of society now. Some [volunteers at BOC] would ask if we wanted more [food] and I remember that restored my dignity. I felt human again. Most of the time when I walked the streets, I wished that I could just disappear. When I came up from under the bridge and it was rush hour traffic and everyone [turned and looked at me] there was no feeling in the world that was worse.

PM: Everybody thinks that people have to be on drugs to become homeless and it doesn’t happen that way. For me, it was the issue with my finances. They have great programs [at BOC] that help you learn. I learned new things financial-wise from those programs.

WN: In my last run, I carried a duffel bag and a suitcase, so I looked homeless (laughs). There were times when I just had a single backpack and was clean dressed and when I started talking to people on the bus about what [my situation] was [they would say], “I never thought you were homeless, look at you.”

JG: A part of being homeless is the system. It is a vicious cycle that you get caught up in where you get caught with an open container of beer, or you are asking someone for a dollar, and you get a ticket. Then that ticket turns into a warrant because you don’t go. And then they pick you up and take you to the jail. It is just this vicious cycle that happens. What do you do? They let you out at three o’clock in the morning out west. That was the hardest thing for me. I always thought a blonde would show up in a Porsche to help me but instead it was the Hollywood Police (laughs).

HG: Do you think that there are any laws that make it harder to get out of that cycle?

JG: Everything that you do is against the law to the officer’s perception…They use [jail] as a warehouse. There are people that just need help in that jail. Is it a crime to be homeless? Maybe there’s 400 beds in Broward County [in homeless shelters]. You know where the rest go? To Pompano, our main jail. When it becomes season [for tourists] you go to jail more because they don’t want to see it on the streets. When I was homeless for six years [I learned this] – when it was summertime you could have at it walking up and down, holding your sign. But when [tourists] come, get off the streets.

CW: Knowing your state and being able to push yourself in a direction to help yourself.

PF: Never give up.

WN: I work on the women’s side [of BOC]. I tell everybody over there that there are two main ingredients to keep you going – patience and tolerance.

JG: It’s not just [donating] money. And instead of calling the police on the next homeless guy why don’t you call your senator and ask them why you see people who are homeless? Try to picture yourself in someone else’s shoes where one night everything you have is gone. Ask yourself if it would be easier just to get a job…we want to become a voice to empower people. This is a hand up, not a hand out.