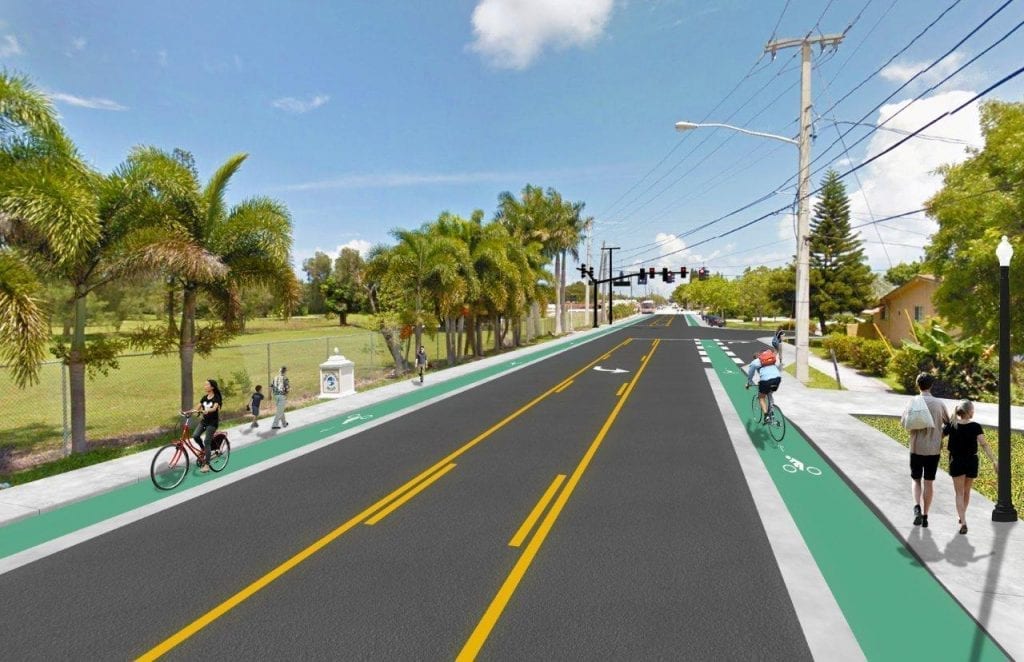 Hollywood residents recently came together at City Hall on June 29 to learn more about the upcoming Johnson Street Complete Streets Project. They had an opportunity to meet with the officials who are leading the project and learn about what is being planned.

The project involves the rebuilding of Johnson Street with one travel lane in each direction and a center left turn lane. Concrete sidewalks and bicycle lanes will be installed along both sides of the roadway, as well as a new drainage system and decorative street lights.

Included in the project’s budget are bus stop pads for shelters and Americans with Disabilities Act compliant pedestrian ramps at intersections. Eight intersections’ signals are planned to be improved with pedestrian controls and countdown timers. Also included in the project are shared-lane bicycle pavement messages installed from US-1 to North Eighth Avenue, according to James Ford, project manager. Circular driveways on home properties on Johnson Street and more trees will be installed as well.

In Hollywood, Johnson Street stretches from the Atlantic Ocean in the east all the way to the City’s border with Pembroke Pines to the west.  As one of the City’s primary east, west arteries, Johnson Street, provides access to Memorial Regional Hospital, Joe DiMaggio Children’s Hospital, the Johnson Street Business District, Dowdy Field, Stan Goldman Park and hundreds of residential and business properties.

As the use of Johnson Street has increased, Hollywood residents, business owners, pedestrians and motorists have voiced their concerns to the Florida Department of Transportation, Broward County Transit and the City of Hollywood Commission about the condition of the roadway and potential safety issues. Lack of sidewalks, bus shelters, lighting, and improper drainage, as well as heavy traffic volumes have been some of the concerns raised over the years.

In response, the Florida Department of Transportation, the Broward Metropolitan Planning Organization and the City of Hollywood have partnered to redesign a two mile stretch of the corridor from the C-10 Canal east to Federal Highway. Neighborhoods in this area include: Hollywood Palms, Royal Poinciana, North Central and Park East.

Residents along Johnson Street will have to sell small amounts of their property to the City to make the project possible. The accumulated cost of that property is estimated at $5.1 million.

As the project progresses there will be numerous opportunities for people to share their input.  Community meetings, presentations to Neighborhood and Civic Associations and one-on-one property owner meetings will take place over the course of planning for the project.

Traffic control during construction will require total closure in short roadway sections. Detours will be necessary to maintain traffic around work areas.

The Johnson Street “Complete Streets” Improvement Project will cost approximately $16 million dollars. The Florida Department of Transportation and Broward Metropolitan Planning Organization are seeking federal funds in the amount of $12 million, with the City of Hollywood committing to approximately $4.4 million.  Project construction is expected to begin in the Summer of 2021 with completion by July 2023.