Local kids give thanks to Hollywood Police Department 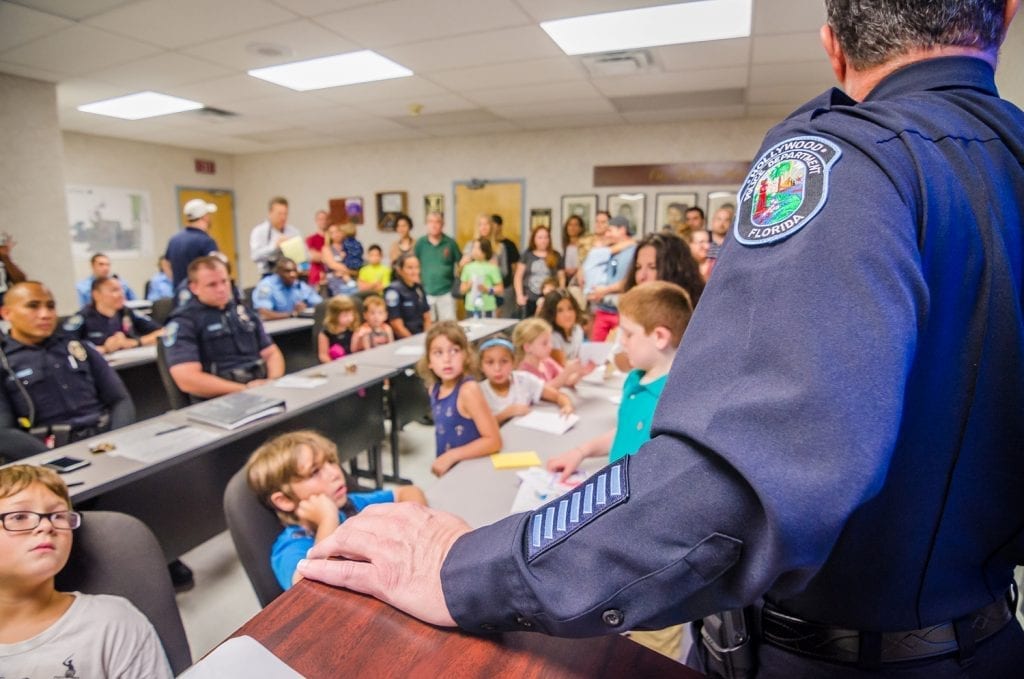 When Hollywood resident Lara Leader saw the tragedy unfolding in Dallas of police officers getting shot during a peaceful march, she thought of her children and quickly decided they must show appreciation to her community’s men and women in blue — the Hollywood Police Department.

As a member of the Parents Association Board at Temple Sinai of Hollywood, Leader was able to encourage families from the synagogue and community to come together for a special event for Hollywood’s police officers on July 23rd.

She brought her children to the event, who joined other kids from Temple Sinai in making thank you cards and pictures for the officers as a Mitzvah Project. Donations of cookies and treats from local businesses were also gifted to the officers.

Local mom Meredith Silver brought her children to the event. “I want my children to know police officers are keeping them safe,” she said.

The families delivered handmade art and cards and visited with officers at the Hollywood Police Department.
Acting Hollywood Police Chief Thomas Demmery was glad to see members of the community coming together to show their appreciation.

“Most officers just want to feel appreciated for the work they do. We are here to protect the residents of Hollywood,” Demmery said.

Pizza party at the precinct

A family of four school-age girls was also jolted by the recent shootings of Dallas police officers they wanted to show their appreciation to local law enforcement. So they decided to have a pizza party.

30 pizzas arrived to the Hollywood Police Department during roll call on July 28. And in attendance were the Leoni girls: Samantha, Gladys, Peyton and Leah, with their mother Mia and grandmother Mary.

“The pizza party was the girls’ idea. They wanted to show their appreciation,” Leoni said. “We’ve tried to teach them to be grateful for the things they have and not to do anything with an expectation, but out of kindness in their hearts,” Leoni said.

The girls presented officers with handmade paintings and poems and then got a chance to explore a SWAT Bearcat before joining dozens of officers for pizza and soda.

For the last order of their day, the Leoni girls were presented with Junior Hollywood Police Department badges and Certificates of Appreciation from Acting Chief Thomas Demmery.

“They have always been interested in law enforcement, fire rescue and EMT,” Leoni said.

Officer Andrew Archer and his new friend, Dion Jr. attending the annual Tamara James Day/ Progress in the Park community event held at the MLK Center in Liberia on July 30.
Stay Connected
Like Us On Facebook
Follow Us On Twitter
Newsletter