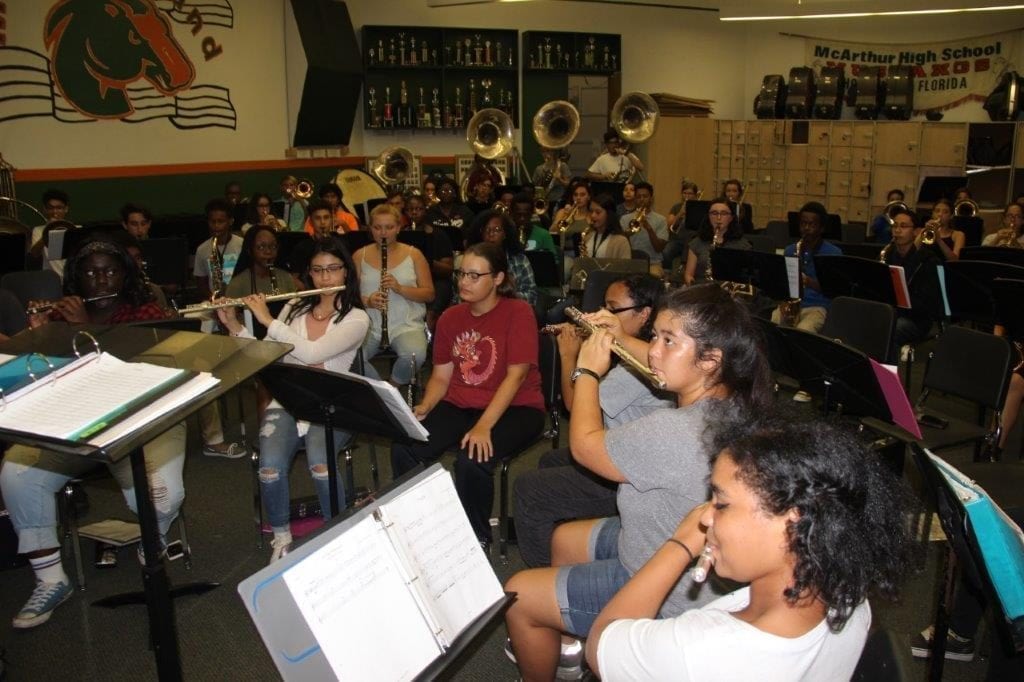 The McArthur High School football team is setting high expectations. Last year, the Mustangs enjoyed success and hope to have an even better season this fall.

Offensive line coach Adrian Pearson is impressed with the talent on this year’s team and the leadership that experienced players are showing. “We have three players that are coaches on the field. They are talented and showing leadership,” said Pearson.

The McArthur High football team is brimming with talent. Top prospects include Joshua Torres; a running back and free safety, Marquice Robinson; the team’s quarterback, Calvin Taylor; wide out, and Michael McPhee, Jr. who plays cornerback.

“We have good players and we are coming together as a team. We are a brotherhood and the players on this team really care,” said Pearson.

The Herd of Sound

The McArthur High marching band is also shaping up for a good season. The band, known as The Herd of Sound, is up to about 110 members.

“We are a traditional band and an up-and-coming band. We are improving together as a unit,” said Moises Martinez, who plays the baritone and is the head drum major.

Playing for the McArthur band means a lot of work and a tremendous amount of effort. “Being a part of this band you learn life lessons, like the importance of being responsible and on time,” said Raeven Seales, a drum major who plays the clarinet. Isabella Zamudio, a drum major who plays the flute enjoys a bond that her band-mates can relate to. “We are like a family,” she said.

The band welcomes a wide variety of students who want to work together and put on quality performances. Those who join can expect to make a strong effort and work together as a team. The band will perform at McArthur football games, as well as various competitions and community events.

The McArthur High School Boys and Girls Cross Country teams expect to do well this season. Cecil Mayers, coach of the boys team believes they’ve got what it takes. “We are coming along. It takes dedication to be a good runner. We also focus on general physical fitness,” he said.

Giovanni McPhee, the boys’ team leader said, “It feels great to run. Last year I broke the school record and I hope to do better this year.”

The girl’s cross country team is also preparing for a good season. Raynelis Valdez, who leads the girls’ team, said “You need to motivate yourself and have a strong mindset to be a good runner. We should do well this year.”