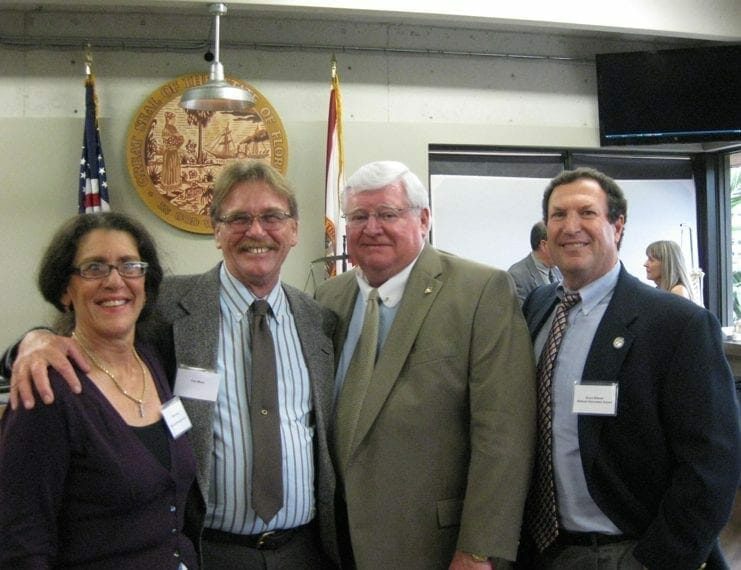 At the recent Florida Bar Convention in Orlando, Sherri Moss, a veteran teacher who has been teaching at Bethune Elementary School in Hollywood for the past 26 years, was honored 2016 Justice Teaching Teacher of the Year.

“This is a well deserved recognition for Mrs. Moss,” said Bruce Blitman. “Moss has conscientiously taught her students about civics and the principles of the United States Constitution during the five years that we have worked together on this outstanding project.”

Moss started working at Bethune Elementary in 1990. “I started teaching first grade and have been there through thick and thin ever since.”

In 2001, Moss was asked to teach a 4/5 split class of students with difficulties in reading.

“They were some of the most talented and creative youngsters I ever met,” she recalls. “They just had some difficulty sitting still so we learned through real world experiences. We had a large garden, we did many lessons outdoors, and we also arranged the room to suit the days’ learning goals.”

The administrators at the time kept wondering where those kids were as most of them had frequent behavior problems in the past.

“I simply challenged them to keep the ‘A-student’ status they earned from me for being there the first day ready to learn.”

The students worked hard and earned a trip to John U. Lloyd Park and Nova Oceanographic Center for earning “C” or better grades, without referrals.

Moss continued stepping outside the box and after she learned that 4th graders had not been taught about the Constitution or Declaration of Independence. She made it her mission to teach civics and government the way she had been taught.

“Born and raised in Philadelphia,” recalls Moss, “I  spent many a field trip downtown at Betsy Ross’ house, Constitution Hall, Franklin Institute, etc. These values are very important to me. I was actually inspired by my third grade teacher to become a teacher myself!”

“Bethune Elementary School of the Arts is an amazing school,” said Moss. “The students are AWESOME and each child can find their special strength academically and/or creatively.”

“Each child attends arts classes every day,” says Moss. “The students in my class actually have their self portraits hanging in the White House!”

Coming up in Hollywood

Moss received her B.S. at University of Miami after attending Penn State for three years. She then went on to attend Florida International University (FIU) and earned a Masters in Reading. She has been a Hollywood resident since 1987, purchasing a home in Hollywood Lakes with her family in 1993.

“My son and his friends made it the ‘command center’ during the summer!” shares Moss. “Since most of those friends also went to Bethune, and their moms were other teachers, it was a place for us to chat about our plans for school.”

Moss and her family have enjoy riding their bikes to events at Young Circle and the beach.  “We raised our son here and have enjoyed all of the best Hollywood has to offer. Downtown Hollywood had so many great family places: the Hobby Shop, The Used Bookstore, and the Rainbo Café.

State and national surveys frequently suggest that Americans in general know little about the operation of the American justice system. Justice Teaching strives to combat this shortcoming of American education. The ultimate goal of this program is to pair a legal professional with every elementary, middle, and high school in the state of Florida.

Moss became the Justice Teaching representative for Bethune in 2007 and then met Blitman in 2010.

“Mrs. Moss is a wonderful teacher who cares passionately about her students and her work,” said Blitman. “There are hundreds (if not thousands) of teachers who are participating in this program across the state, so it is quite a distinction for Mrs. Moss.”

Blitman speaking to the class

“He is the reason the program is so successful at our school,” said Moss. “He gives tirelessly of his time and consideration by not only engaging students in reality-based civics lessons, but also spends hours of his personal time getting the most amazing guest speakers to come in and share their experiences with my students.”

“We are the most special class at Bethune because we have our own lawyer,” says Melodie, a student from the graduating class of 2011.

“There are many students who have gone on to have excellent careers,” states Moss, who stays in contact with many of her students. “The most famous I recall would be Travis Daniels, who became a Miami Dolphins football player. Many others, my son included, learned their fundamental skills at Bethune and became successful adults in their chosen field.”