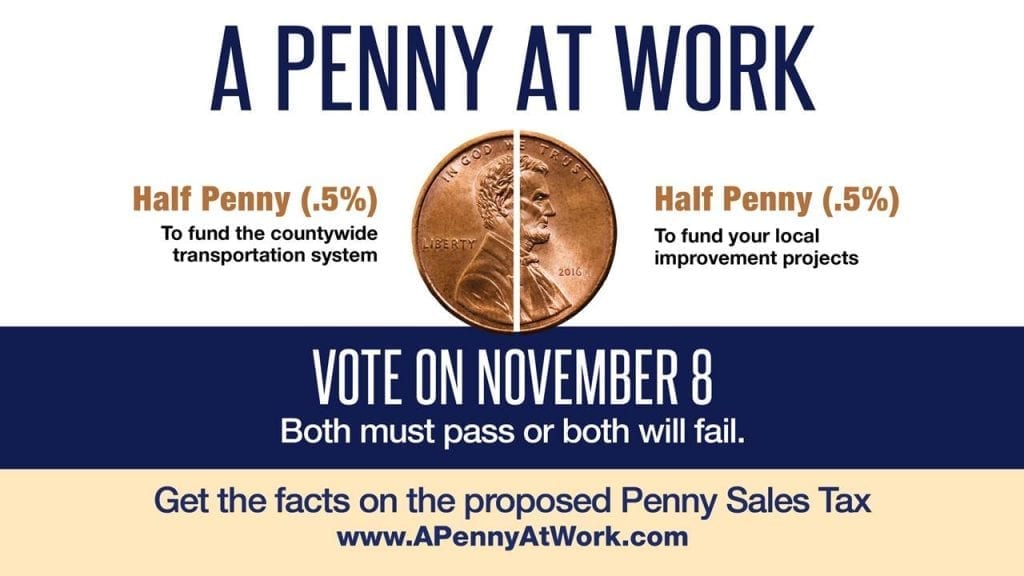 Broward County voters will see two, interlocked questions on the November 8th ballot, each asking for a half-penny sales tax increase. One proposal asks for a half-cent increase to finance countywide transportation projects. The second is a half-cent surtax to fund municipal infrastructure projects and came at the request of Broward cities.

The proposed change represents an increase in sales tax of one cent to every dollar. The tax would apply only to the first $5,000 dollars of a transaction, meaning it would only negligibly affect larger purchases.  The revenue from the half-cent city infrastructure tax would be shared by all of Broward’s thirty-one cities based on population.

A full one-cent sales tax would raise an estimated $310-million in the first full year and $12.4 billion over thirty years. Both proposals ask voters to increase the sales tax for thirty years and include the creation of an oversight board to monitor appropriate use of the money.

Should voters approve only one of the requests, both will fail.

Part of the proposed tax is a nine-member oversight board. This entity is designed to ensure the money gets where it’s supposed to. The nine members, seven of whom must be Broward County residents, would serve four-year terms.

The board would need a healthy variety of members, to provide perspective and experience to their decision-making process.

The board would include one of each of the following:

Where does the money go?

There are two surtax referendums on the ballot.

If they are approved, half the money raised would go to county-wide transportation improvements. Specifically, to reduce congestion, develop rail transit, improve bus transit, and enhance roads and sidewalks. This would include the addition of new bike lanes, and improvement of existing ones.

The other half would go to Broward County’s cities and unincorporated areas. The money would fund infrastructure improvements such as public buildings and facilities, public safety equipment and parks.

Parks and Recreation would also appreciate the funding boost. With it, Hollywood parks would soon feature new playground equipment, shade structures and improvements to the marina.

The tax would go into effect in January 2017.  Click here for more information.