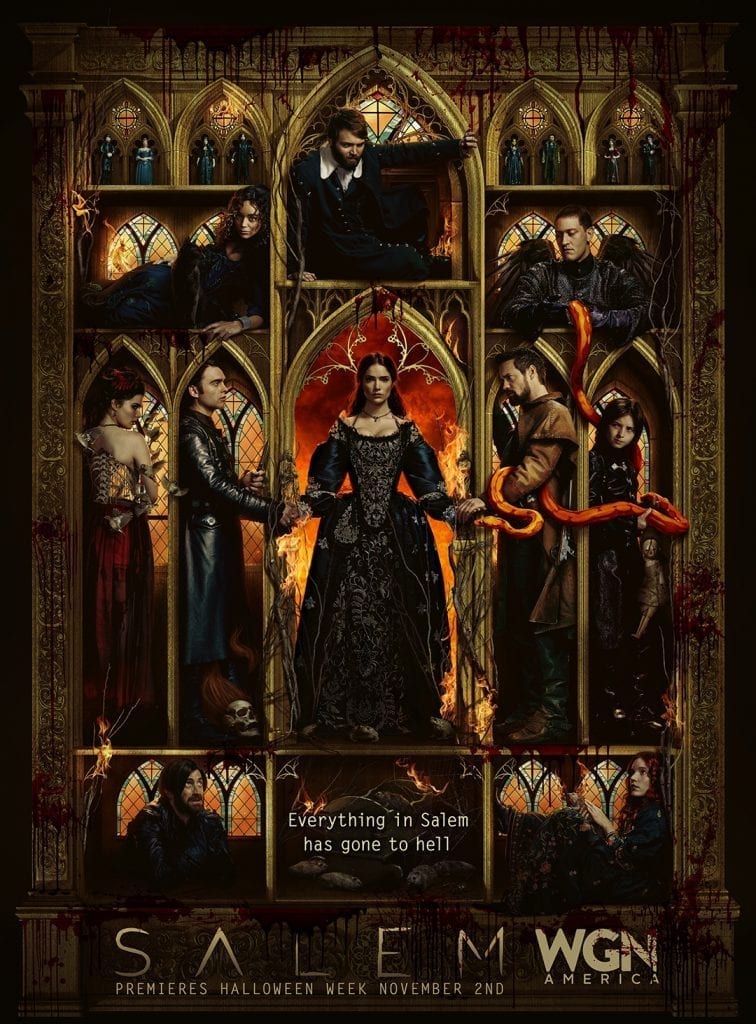 Election coverage isn’t the only frightening thing on TV this November.

Gabel plays the multi-faceted, tortured soul of ex-Reverend Cotton Mather, who is married to the angelic, yet sultry, Ann Hale – a witch.

His credits include Count Vertigo on Arrow and Agent Lincoln Lee on Fox’s hit show Fringe. Gabel is also slated for an upcoming anthology series from National Geographic called Genius. And prior to Salem he appeared in the film version of Dan Brown’s novel, The Da Vinci Code, directed by his father-in-law, Ron Howard.

Born in 1981 at Memorial Regional Hospital in Hollywood, Florida, this local superstar had his early beginnings at Beth Shalom Academy and University School of Nova Southeastern in Davie.

He realized he had a penchant for theatre when his best friend, (another famous Hollywoodian), Josh Gad, took him on an audition atthe legendary Hollywood Playhouse, once the best little theatre in town.  Gad would go on to be the voice of Olaf in the movie Frozen and most recently worked on The Angry Birds Movie in 2016.

“I’ve known Josh since kindergarten,” shares Gabel. “He grew up in Emerald Hills and we went to school together. One night I slept over and he asked me if I wanted to go to an acting class with him. I agreed.”

The next morning they were at the Playhouse and Gabel was hooked.

“At the time,” recalls Gabel, “the main selling point was that they had a snack machine with an opening at the bottom. I could stick my hand underneath and touch the candy, so I kept going with Josh and before I knew it, I fell in love with it. Acting was what I wanted to do the rest of my life.”

Gabel’s parents were very supportive, bringing him to classes and auditions to local plays on weekends.

While taking classes at the Broward Performing Arts Center Gabel was in a senior production of Guys and Dolls (also performed at the Hollywood Playhouse) while attending Nova.

Gabel’s mom also took him to Miami for auditions. “I wound up doing a strange kids cooking show, which was the beginning of my camera experience. Later I performed as John Proctor in a production of the Crucible. I think that role helped me with my role as Cotton Mather.”

In the fictional series, Salem, Cotton Mather is a well-educated aristocrat and former reverend, who finds himself married to a witch. Seth’s character is constantly trying to find a way to escape- which is hard to do with Brown Jenkins eating his insides every time he does something wrong. (You’ll have to watch!) Gabel is so convincing in this role that it earned him a highlight in The Hollywood Reporter’s “Emmy” Issue in 2014.

“I love how bold the show is,” says Gabel. “All the risks that it takes. It’s not afraid to be shocking, really good drama, how everyone interacts, truthful and real insane circumstances.”

Salem is a battle between heaven and hell featuring intense moments between characters experiencing immense internal conflict. These contentions boil over into explosive moments that unfold the immense external conflict of a spiritually torn town.

“Mathers wears his heart on his sleeve in a world so dark,” explains Gabel. “Pilgrims and puritans fighting in a new land between God and the devil. There are forests and trees, native spirits, clear space… imagine the level of fear and uncertainty. But once you change your relationship to failure and accept it, playing pretend allows you to experience so many things, revolutionary ideas, becoming immersed in that world.”

Talent runs in the family

Gabel received his professional training at NYU (New York University) where he met his wife, actress Bryce Dallas Howard. Howard is the daughter of award-winning filmmaker and actor, Ron Howard. Seems talent runs in the family.

“Bryce and I both studied acting,” recalls Gable. “When we first met, she was looking at me in a weird way. We started dating and months later she told me that the day she met me she wrote in her diary, ‘I met the man I’m going to marry.’”

The star-bound couple married in 2006 and now have a 9-year old boy, Theo, and a 4-year old girl, Beatrice.

Gabel lives in L.A. with his wife and children and still visits his parents here in Hollywood; but for Salem, he travels to Shreveport, Louisiana, where the show is filmed.

“He’s like a Sweeney Todd character,” says Gabel of his South Florida peer. “He has a penchant for murder and is fascinated about things in the water.” Multi-talented Manson also sings the show’s theme song, Cupid Carries a Gun, collaborating with series composer, Tyler Bates.

Gabel loves having another local on set with him but says the entire cast is a pleasure to work with.

“We’re all around the same age, we all have a level of professionalism and willingness to work really hard. No divas!”

You can watch this Hollywood sensation in WGN’s first original scripted series, Salem. Mark your calendars for November 2 and get ready to delve into a delicious cosmic battle of epic proportion.