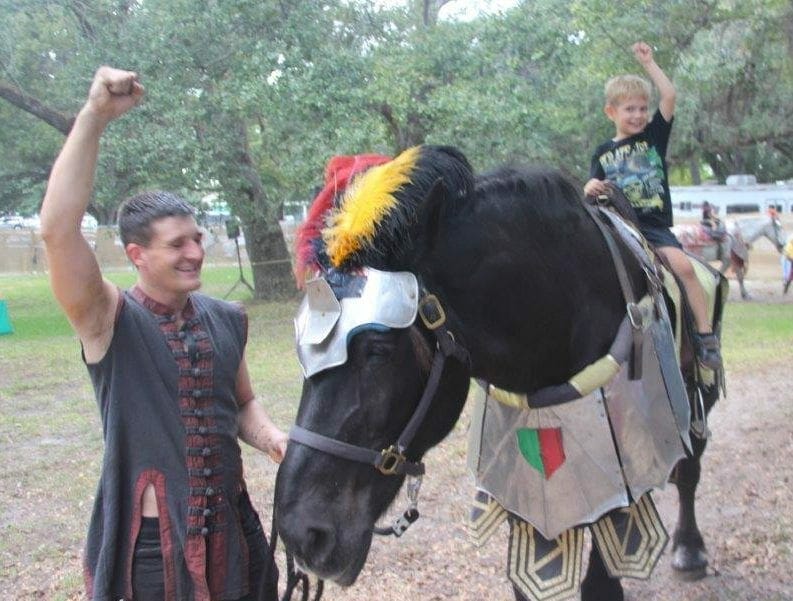 Camelot Days at TY Park offers an opportunity to escape into a late medieval fantasy world. You could be a prince, pope, king, queen, peasant, pirate, belly dancer or any other medieval character. Some people were part of the event as actors and show people while others came in costume and had fun. There was plenty of food and drink, music and camaraderie.

You could see a performance by the Royal Chessmen. This is a group of people who train on Sunday afternoons at TY Park to perform staged combat. Kevin Mathis, a member of the Royal Chessmen played the role of King Arthur. Members of the organization worked to develop a show for Camelot Days.

“I love being a part of the Royal Chessmen. We train in the techniques of stage combat. We use stage weapons such as swords and axes but it is always staged. We want to make it look dangerous. It is great fun for us and I’ve learned many new things,” said Mathis.

There was a belly dance performance. Alina Yllanes, a member of the Lotus Tribal Arts, which performs belly dancing enjoyed performing. “We do traditional belly dancing. It is part of folklore and goes back to ancient times,” said Yllanes.

Jim Laird was playing the role of Blackbeard the pirate. “We put on a show for children. We have a lot of fun,” said Laird.

Dave Johnson attended to play the role of another pirate Black Wolfe. He was part of an encampment known as the East Coast Privateers. The encampment provided an fun but educational presentation on how pirates lived. “We educate and entertain people. It is a lot of fun,” said Johnson.

Tim Fraley played a Pope. “This is fantastic. There is a lot here to see and do,” he said.

Some people just enjoyed playing at royalty. Dr. Michael Freimark and his wife Rita Freimark played the role of a queen and a fool. “This is fun for us,” said Dr. Freimark.

There was something for everyone at Camelot Days. There were humorous shows, jousts, and musical performances. There were also groups that make presentations on late medieval European history. Camelot Days were well attended and the weather was good.