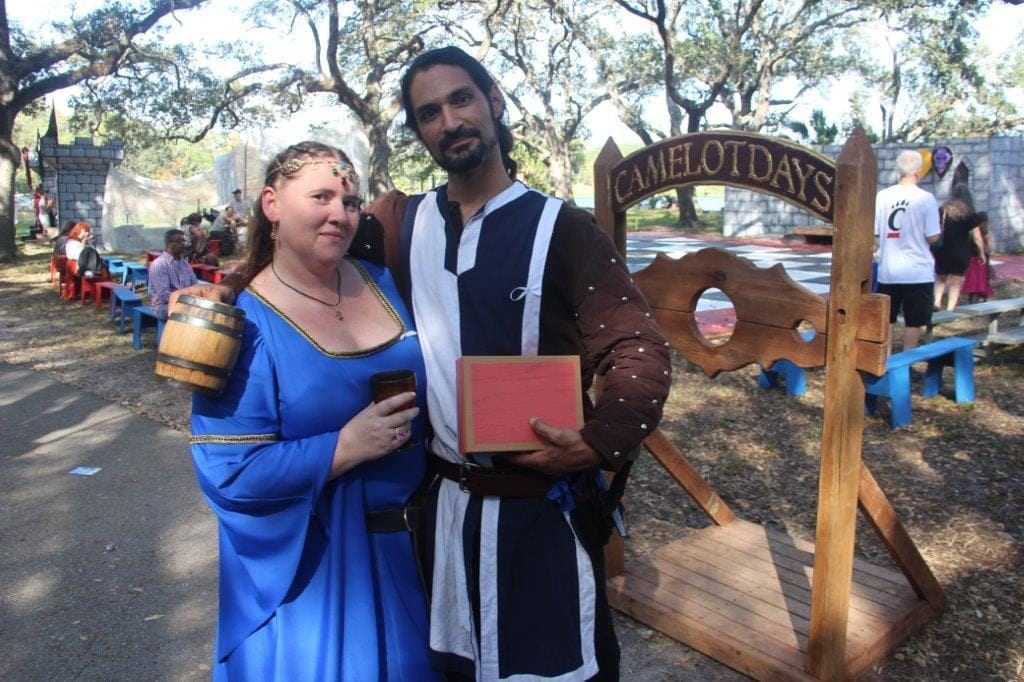 Alyssa Elder loves participating in medieval-style combat. She has worked to make some of her armor and enjoys being a part of the History of Chivalry.

The organization put on combats at the recent Camelot Days Medieval Festival at TY Park.

“I love the people in the History of Chivalry and I like to participate in combat,” she said.

While the combat is strenuous, those who participate are really good friends. The combats usually end when one of the participants is too exhausted to continue, and no one really gets hurt. Members of the History of Chivalry meet and train at TY Park in Hollywood on the third Sunday of each month. They also work on archery and medieval art.

Kevin Siegelbaum, a member of the History of Chivalry, said that most of the members enjoy participating because it allows them to release stress from modern life. “We have a lot of fun and people like to participate in combat. We also have an art program. We have people who will spend a lot of time making medieval-style bowls and other items,” he said.

Those who come to Camelot Days can put aside their daily lives and enter into another time and place. They can become a pirate, a pope, a knight, a king, a peasant, a fairy or any other character from the past they would like to be. And if they want to learn more about life in medieval Europe, there are people there who have studied the past.

Will Parker, a member of the Realms of History, a medieval education organization, was among a group of people eager to explain life in medieval Europe. He has studied the early 1600s. “We focus on the time from 1066 to 1650,” he said.

It was a tough life for most people then, Parker said. Life expectancy was short and people had to struggle to survive. “When there was a war, the winning side would ask for ransom payments from the losing side for the people who were captured,” he said. If you got sick, you would go to a doctor/barber who would bleed you. That is why barber poles have red stripes on them.”

But those who come to Camelot Days will spend their time having fun. There is plenty of food and drink and show as well as musical performances and stage plays. Jousts involve men on horseback.

On this day, Terese Songster played the harp for people, while Connie Funk offered an opportunity to use a sophisticated slingshot device to shoot medieval-style weapons.

Robert Roland, a member of the Royal Chessman, said he enjoyed playing the role of Sir Lancelot. The organization performs staged combats and meets Sundays at TY Park. “We are having a good time today,” he said.