The Wee-World of Alex Meiklejohn 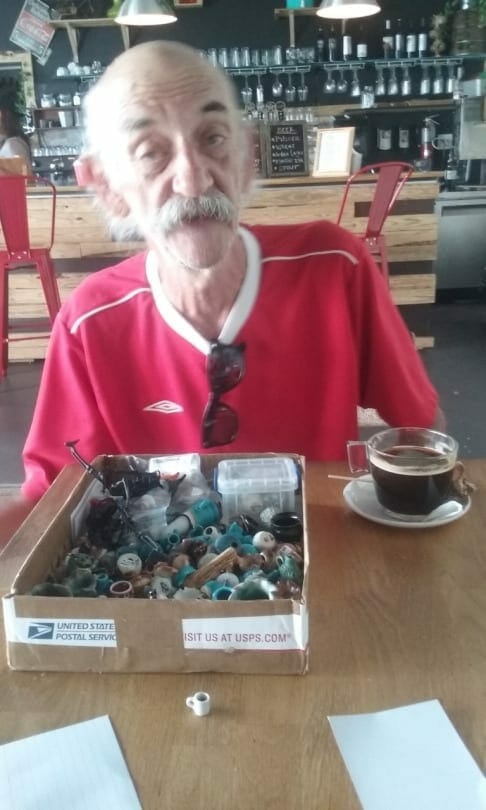 Alex Meiklejohn is an artist. Alex was also homeless and living at HACK (a Fort Lauderdale shelter) until last year when his case worker hooked him up with permanent housing.

“I actually won the homeless lottery,” cracked Alex over coffee at AT3. “There was a literal lottery for living spaces and I won the last one!”

Alex’s spiral into homelessness started in 2011 when the graduate of the Rochester Institute of Technology (where he studied Ceramics in the 1970’s) was traveling from Rochester to Buffalo for one of his many art exhibitions. His car was rear-ended and he was hospitalized. His life, much like his car that day, spun out of control…

“Before the accident I probably had over 200 shows across the United States,” Alex reflected. “I had 18 major exhibits in 1998 alone!”

“Frankly, I was living life on my terms. Between ‘proper’ exhibitions at galleries and art fairs, I’d just drive around the country with my wheel and kiln in my van. I’d find a State Park with electricity, set up a tent and do my thing.

“I’d both create inventory and often sell to the folks around me—it was a great life.”

Alex is a ceramic artist with a little “c”. You see he’s mastered the art of mini-clay creations.

“It took me three-years to master the technique called Throwing off the Hump so that I could create my wee-collectibles. I use tools rather than my hands to shape while spinning.”

Alex is a fixture around Hollywood, pedaling around on his bike and working out of the L/Mercado Studio Collective.

“I love Hollywood; it’s an easy town to putter around. Actually, I first came to Hollywood with my parents in 1961 when I was just an infant. So I guess you might say, my life has spun full-circle!”

(To View or Purchase Alex’s work log onto: www.texastiny.com)