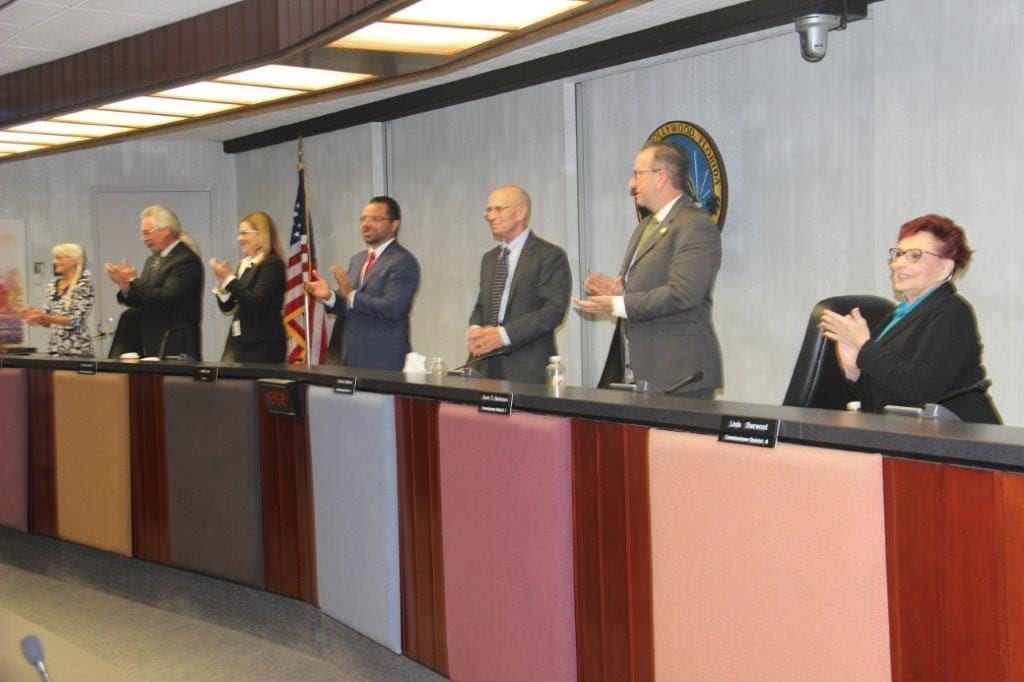 The Hollywood Commission welcomed two new members, Debra Case of District 1 and Mayor Joshua Levy, during a recent swearing-in ceremony. Commissioners Peter Hernandez of District 2, Dick Blattner of District 4 and Linda Sherwood of District 6 were returned to their positions after winning their respective elections. The elected officials were sworn in while family members watched.

Debra Case is the newest member of the Hollywood Commission. Her first goal is to address the pension issue. This is a problem that many Hollywood leaders, including former Mayor Peter Bober, say must be brought under control. “We have to deal with the pension problem. We must fix the costs of the pensions,” she said.

Case said she believes that it may take small steps to deal with the problem and that people involved may have to make concessions. She is looking forward to getting to work and to serving District 1 residents.

Case was born in Burlington, Vt., in 1957 and has had a variety of business experiences since high school. In 2000, she and husband, Terrence, moved to Hollywood. She said she was impressed by the potential of the City’s beach. She took a job as a bookkeeper and then became a manager and then owner of the Ocean Alley Restaurant and Beach Bar. She created jobs for 34 employees and developed a successful, profitable and well-known restaurant on the City’s Hollywood Beach Broadwalk.

Case became familiar with the issues on Hollywood Beach in her position as President of the Hollywood Beach Business Association. In 2013, she was awarded the Greater Hollywood Chamber of Commerce’s “Business Woman of the Year.”

Dick Blattner was sworn in for another term on the Hollywood Commission representing District 4.

Blattner has enjoyed a successful business career. He worked for Helene Curtis Industries, Consolidated Distilled Products, Xerox Corp. and Saxon Business Products. In 1977, he created Suncoast Marketing in Hollywood; he retired from this company in 2000, selling it to his partners. Blattner was elected to the Commission in 1994, where he served until 2000. He was re-elected in 2007 to complete a term, elected again for a full term in 2008, and then was re-elected in 2012. He has served as vice mayor three times. Blattner and his wife, Bunny, have two sons, David and Billy, and four grandchildren.

Peter Hernandez was sworn in for another term on the Hollywood Commission representing District 2.

Hernandez said he is concerned about Hollywood’s pension and healthcare cost problems and believes it’s important to bring the costs for maintaining these programs under control. He wants to move the City forward.

Hernandez has been involved with running his family’s business for much of his life. As a small-business owner, Hernandez said he understands the importance of hard work. He has experienced the struggles that face small-business operators and has learned how to keep an organization solvent. He remembers how his business started on a small lot on Johnson Street with shovels and wheelbarrows. The business grew, and in 1984 Hernandez began to run the company. Today, it is a regional sand and gravel provider.

Hernandez has volunteered on various boards and committees, including having been on the Broward County Zoning Board, Hollywood Hispanic Affairs Council, Unsafe Structures Board, among others.

Linda Sherwood was elected to serve another term on the Hollywood Commission representing District 6.

Sherwood has worked as an oncology nurse. She became involved in public service and began by creating a non-profit organization to help senior citizens find work. She was first elected to the Hollywood Commission in 2008. She has worked to promote improvements on State Road 7 and Hollywood Boulevard, as well as advocated to keep bus transportation routes, facilitated new landscaping within her district and acquired funding for the Washington Park Day Care Center. She has also served on the Broward League of Cities Legislative and Advocacy Committee. Sherwood has four children and four grandchildren.

Outgoing Mayor Bober thanked Hollywood residents for allowing him to serve as mayor. He chose not to seek an additional term.

Bober said he remembers leading the City through a severe recession when many solid citizens and hardworking people could not find jobs. He also described some of the difficulties of his tenure, including a time when the City faced a major financial crisis.

“The new mayor and commission will face similar challenges. The pension obligations could push the City over the brink,” he said.

Bober was appreciative of the opportunity to serve as mayor. As he spoke, he choked up a little. “I was looking for a challenge and I got one. I was able to meet many interesting people. I love Hollywood,” he said, as his family members looked on.