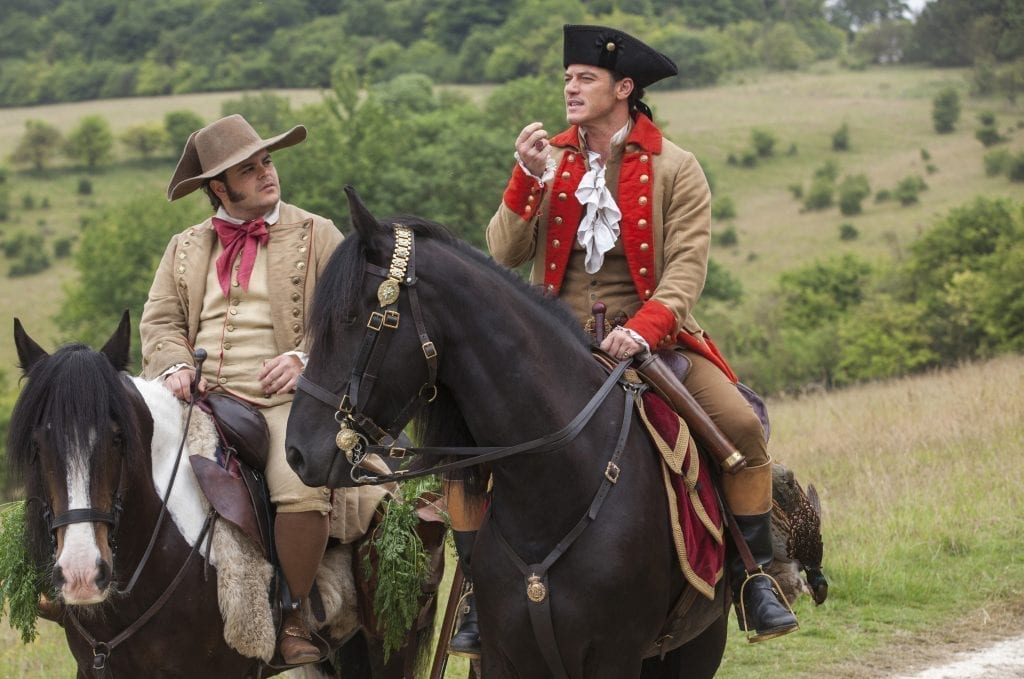 Josh Gad remembers the time he knew he wanted to become a comic actor.

“I remember sitting in a dark theater in South Florida in the winter of 1992 and watching a Genie come to life in Aladdin and tear a hole in the very fabric of space and time for me,” he wrote in a special guest commentary for USA Today published on August 12, 2014. “It was at that moment that I realized, ‘That’s what I want to do with my life.'”

The article was a tribute to Gad’s idol, Robin Williams, who died the day before.

As Disney characters go, the Genie is arguably one of the most memorable. But it wasn’t only the Genie that captivated Gad. In an April 2015 article appearing in The Daily Beast, Gad admitted to writer Kevin Fallon that he enjoys playing sidekicks and second bananas.

Josh Gad (left) and Kevin Hart in the 2015 movie, “The Wedding Ringer.” Gad and Hart famously crashed the real wedding of Chandni & Rajan Patel on December 13, 2014.

“The Genie sums it up best for all those characters,” he continued. ‘You ain’t never had a friend like me.’  You want these guys in your life. You want that little sidekick who’s going to be ever optimistic and joyful.”

Gad gets to play the pompous Gaston’s dimwitted lackey, Lefou, in the live action version of Beauty & The Beast that opens on March 17. In October, he tackles a role that is a change of pace for him: portraying an attorney in Marshall, the movie about the early career of Thurgood Marshall, who went on to become the first African-American justice on the U.S. Supreme Court.

He’ll close 2017 in the Kenneth Branaugh remake of Murder On the Orient Express that’s due out on November 22.

Gad started the year lending his vocal talents to A Dog’s Purpose. The movie was ensnarled in a public relations controversy when, just days before its release, a TMZ video allegedly showed on-set animal abuse involving a stunt dog who refused to go into a pool of churning water. The movie’s producers were last month reported to have been cleared of any negligence by an independent third-party report, according to American Humane, the group that is responsible for overseeing animal safety on movie sets.

In Frozen 2, the actor will again voice Olaf, the snowman who enjoys giving warm hugs. The film is expected to be released by Disney in 2019.

A native of Hollywood, Gad was a three-time National Forensics League champion when he attended the University School of Nova Southeastern University in Fort Lauderdale, Fla. The 36-year-old is a child of divorce who Biography.com claims used wit and humor to help him deal with the dissolution of his parents’ marriage. The actor has two older brothers.

“I remember us going to the local arcade in South Florida – it was called Grand Prix Race-O-Rama – and we would just play nonstop on a Saturday or Sunday,” Gad told Crave’s John Guadiosi in 2015, when he was doing publicity for the movie Pixels. “To get the chance to chase these video game characters that I remember playing against as a kid was like being a child all over again.”

According to the same article, Grand Prix Race-O-Rama was later featured in the documentary The King of Kong: A Fistful of Quarters. Located on 1st Street, in Dania Beach, the complex has since closed. A shopping mecca is supposed to be built at the site this year, according to the Sun Sentinel.

A 2003 graduate of the Carnegie Mellon College of Fine Arts, where he earned a Bachelor of Fine Arts in drama, Gad’s college roommate and good friend, Rory O’Malley, who later appeared with him on Broadway in the Tony Award-winning musical, The Book of Mormon (both would earn Tony Award acting nominations for their respective performances) remembers living with a genuinely jovial, funny individual who wanted nothing more than to make people laugh.

“That place should have been condemned after we left it,” jokes O’Malley. “It was like our own personal Animal House.” The off-campus housing where the pair resided for four years was the 146-year old Negley House, a landmarked dwelling located in Pittsburgh, Penn., which was restored in 1995.

Recently called the most recognizable voice in family-friendly entertainment by Decider.com, Gad’s own family consists of his wife, the actress Ida Darvish, whom he married in 2008, and his daughters, 6-year-old Ava and 3-year-old Isabelle.