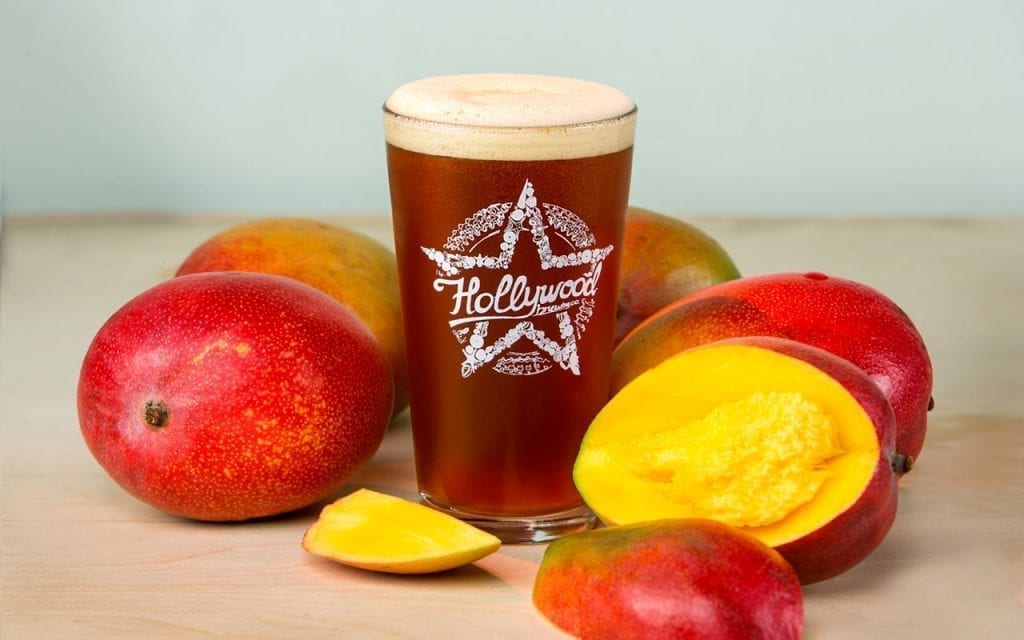 What could be better then a crisp, refreshing beer while kicking back on the beach? Maybe knowing that it was tested, produced and distributed right at home here in Hollywood.

From a deep, copper, brew embodied with the exotic flavor of mango or a clean, pale, ale exuding the zippy tang of grapefruit Hollywood Brewing Company covers all the beer bases.

Located at 290 North Broadwalk, on the corner of Polk Street, Hollywood Beach, Hollywood Brewing Company offers a full bar, New American cuisine and of course, the view is magnificent. Plus, this unique seaside brewery and pub serves as a ‘pilot system’ for new flavors.

Brett Hubbard, product distributor for Hollywood Brewing Company, explains. “The ‘pilot system’ is where new beers are created and tested by guests before being produced in the full-time lineup at their production facility. ”

“Most everything that is made in the pilot system is fairly well received,” says Hubbard. “Sometimes they need to be tweaked a little bit,  add a hop here or cut down the ABV (alcohol by volume). But so far, so good.”

“The process takes about two weeks for ales and four weeks for lagers,” explains Hubbard. “Inspired by great flavors that Florida has to offer, the beers are full flavored, yet light and easy to drink.”

Another beer inspired by the South Florida lifestyle is a light lager called ‘Limon.’ Hubbard says they use natural lime flavor to make it “taste like a perfect day at the beach.”

So how did this all get brewing?

Established in 2011 with European roots, Hollywood Beer is produced and influenced by the German beer purity law, Reinheitsgebot, meaning only barley, hops and water – according to the original law adopted by Bavaria early 1500’s. However, in the early 1990’s the recipe was expanded to include yeast.

Coupling these four basic ingredients as the foundation for all their beer, together with the flavor and inspiration of Hollywood’s spirited and sparkly lifestyle, European owners joined forces with long time Hollywood resident and managing partner, Johnny Quinones, to give life to Hollywood Brewing Company.

“Our beers are inviting, drinkable, and refreshing,” says Hubbard. “With unique tastes that craft drinkers are sure to love – under the sun or wherever.”

This great tasting, hand-crafted beer knows how to get around, too. It is proudly featured at local Hollywood institutions like Shenanigans and Crown Wine and Spirits as well as at festivals throughout South Florida.

Only the best will do for this group – brewing, bottling and kegging beers with control, precision and carefully selected ingredients to bring out the cleanest, crispest flavors.

“We use a zip brewing system from Germany,” says Hubbard. “It is a completely state-of-the-art, automated system, which allows us to make the finest, purest, beer taste perfect every time. We are especially well-known for our Pilsner lagers which are very hard to make and allow for no mistakes.”

“We love the people and the culture of Hollywood,” says Hubbard. “It’s individualism inspires us to create new beers that show our love for the community.”

Their motto is, “born on the beach and inspired by the bold refreshment life has to offer,” but you don’t have to take their word for it. Stop in for a visit and taste for yourself.  To find out more, visit their website at Hollywood.Beer.