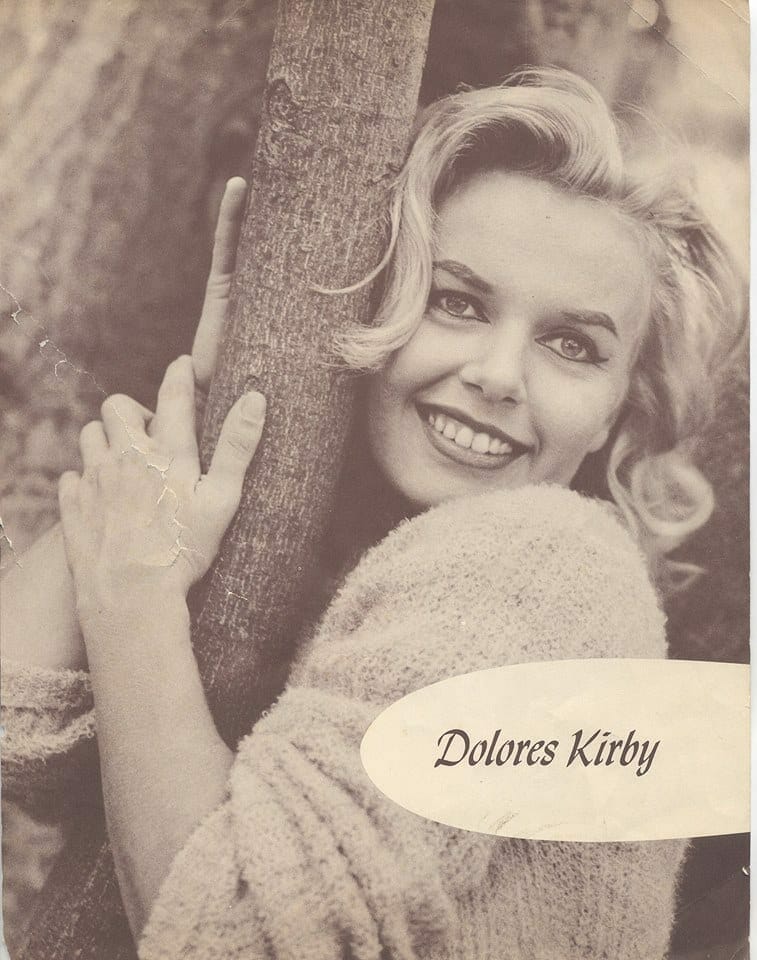 Eighty-six year old Dolores Kirby is every bit the wide-eyed, precocious, seductress she was 71-years ago when she won her first beauty contest at the age of fifteen.

Born in Chicago in 1930, Dolores moved to Hollywood in 1956. “I married Don, my first husband in Chicago and it was he who suggested we make the move to Florida.”

The path that led Dolores to the Hip Hamlet of Hollywood, however, reads like vintage pulp fiction—lots of passion, sex, and celebrity—with big cities serving as the backdrop.

Despite that first foray into the modeling milieu, once she graduated high-school, Dolores decided to enroll in college (North Park University). Her first summer break found her in Saginaw, Michigan, where the underage but overdeveloped lass found work at The Dock (a local bar).

“I met a group of very wealthy men on-board a 56-foot yacht—you might say, one of them “adopted” me,” the beaming blue eyed octogenarian said with a laugh. “No hanky-panky—at least not at first,” she added with a wink.

When summer came to a close, Dolores returned to Chicago, but not to school—having a Sugar Daddy can do that.

“Once back in Chicago, I met Bill Kennedy, a PR guy, who was dying to introduce me to a self-made millionaire—the owner of a game manufacturing company. My reaction was ‘why not!’”

Life soon became diamonds, Cadillac’s and shopping sprees at Saks. “And a whole lot of French 75’s” Dolores laughed, toasting me from across the table.

Dolores’ Chicago was a world of millionaires, mobsters and movie stars—it was all very exciting for a young girl with adventure on her mind…
“Oh, the people I met, Dean Martin and Jerry Lewis, Van Heflin, Count Basie, Lena Horne, Alan King, Pat Boone…” This college dropout was hanging with the in-crowd!

And then love struck—right here in SoFlo.

“I visited Florida often and that’s where I met Don and, well, that was that.”

While married in Dolores’ hometown of Chicago, Don convinced her to move with him to Florida.

“We were two kids with little more than dreams and ambition. I had contacts from my previous suitors and I got Don hooked up with Jack Martin’s production company. Don was a quick learn and he soon became a talent coordinator, while I signed with the Doris Crane Agency.”

While Blondes may have more fun, her natural locks didn’t help when Dolores applied for work at Mai-Kai in Fort Lauderdale.

“Cocktail servers were making big-bucks at Mai-Kai and in the summer modeling work dried up, so I moonlighted. The problem was, I needed to have a Polynesian look and so I dyed my locks black.”

The new look, however, put her agency in a tizzy as they were selling Dolores as a Marilyn Monroe type blonde. Presented with an ultimatum, Dolores settled on modeling; she said aloha to her hula skirt and lei and let her hair grow back au natural.

It wasn’t long before the back-to-blonde beauty was working nationwide.

“Wherever work took me, whether Los Angeles, Las Vegas, New York or Miami, my life was one of fine dining, club hopping and VIP treatment.”

While hobnobbing with the likes of Howard Hughes, Mike Todd and Peter Lawford, Dolores also graced the pages of myriad magazines, even garnering the covers of Panorama, Official Detective and True Romance. She even picked up bit parts on television shows.

“I had a small role on the TV show Flipper–the episode was titled, Disaster in the Everglades Part II,” she laughs.

Eventually the petite bombshell was hired as a Bunny at Hugh Hefner’s Playboy Club in Miami. It wasn’t long after, that her marriage to Don ended…

“Life as a glamour girl was good, but when I turned 38 I decided to hang up the bikini…”
Well almost…

Dolores took on work at the Mouse Trap on Biscayne Boulevard in Miami and that’s where she met hubby number two, Harry.

“Harry owned a business and I was comfortable but he was quite the philanderer. Fortunately, he had a brother, Bob, who adored me. Bob owned a traveling carnival and I decided to live a life on the road as a carny.”

The two entrepreneurs worked the circuit for about 5-years before word came that Dolores’ husband had passed.

Left with a decent inheritance, Dolores however burned through it fairly fast. “I found a boy-toy, what can I say!”

Eking out a living for the next bunch of years, the now sixty-four year old Dolores had a brainstorm.

“South Florida was rife with retirees and I had so much vim and vigor. Well, I got myself a chauffeur’s license and started my own driving service. I advertised in the old Hallandale Digest—my come on was, ‘Let me take you for a ride!’”

Business boomed. So much so that Dolores was left in no less than three wills, inheriting no less than a quarter million dollars and property too boot!

At the age of 79, Dolores finally packed it in and settled into the Hollywood, Intracoastal condo Harry had left her upon his death.

To this day Dolores drives herself, dolls up, drinks exotic concoctions and is as fabulous and vivacious as ever!