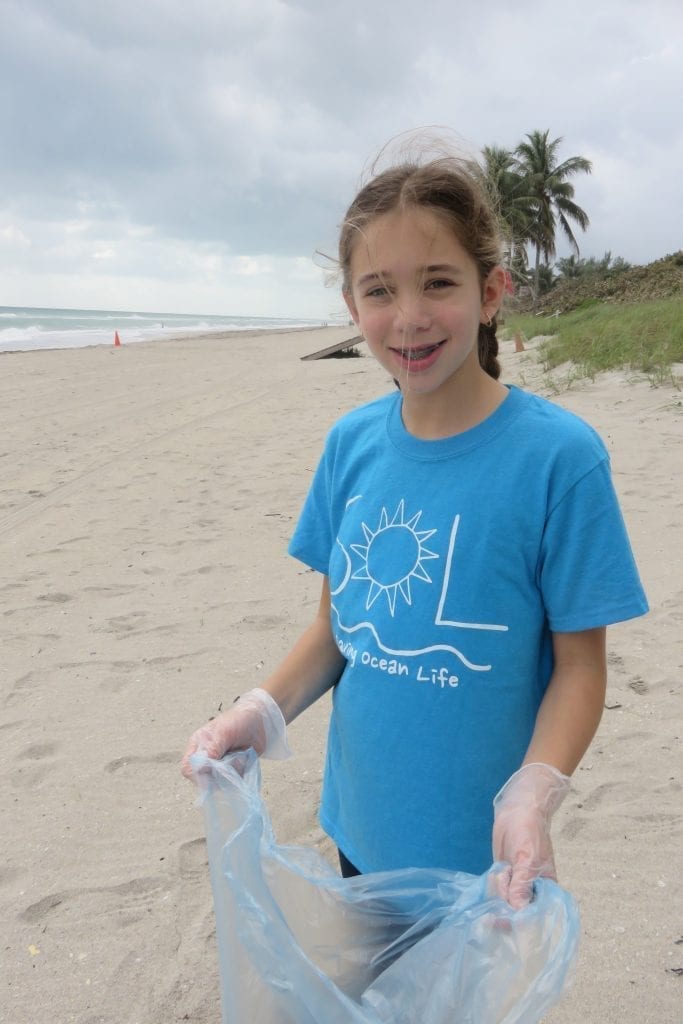 Saving Ocean Life (SOL), committed to preventing beach pollution through organized beach clean-ups and spreading awareness throughout the community, will host an Earth Day event on April 22 at the Carpenter House of Hollywood in North Beach Park, at 4414 Surf Road.

“We will get to meet and feed Captain, the newest turtle resident,” says 12-year-old Joey Goldstein, SOL’s founder. (Yes, founder!)

Goldstein says she started the group in December 2015 when she first learned about the problems facing our oceans. “I told my teacher I wanted to invent something to clean the sea.”

Goldstein’s teacher encouraged her to start on a smaller scale with beach clean-ups. After some thought and consideration, the enterprising young lady joined forces with a couple of friends to form SOL – Saving Ocean Life.

“My friends Jake and Jonah Morris partnered with me to get SOL started,” says the NSU University School sixth-grader. “The mission of SOL is to educate people about marine life and the importance of keeping our coast clean. We do beach clean-ups four times a year, along with educational talks and fun activities such as a shark tagging excursion and a turtle release.”

Goldstein’s last event was hosted at Margaritaville on Hollywood Beach in February.

“The resort allowed us to gather there for the early morning clean-up and again later for the awards ceremony,” Goldstein says. “We had over 75 mostly kids participate. We combined the beach clean-up and a treasure hunt into one big event so everyone would have a good time.”

Colored seashells were hidden in the sand so everybody had a chance to win prizes. Each person was asked to fill up one bag of trash and to find specific items on the treasure list such as a plastic cup, an aluminum can and a beach toy.

“It’s unbelievable how much trash is on our beach,” Goldstein says.

Born and raised in Hollywood, helping her hometown is important to Goldstein.

“My parents have always encouraged me to give back to the community and I wanted to do something to help,” she says. “Being at the beach is my happy place. It’s a comforting place for me to hang out. I’ve always loved the water and swimming.”

Goldstein says English is her favorite school subject. She also enjoys playing drums, swimming on her school team and hanging out with her friends. But that doesn’t stop her from reminding everyone that beaches are an important part of our community and must be taken care of.

“It’s not that hard to throw away your trash in the garbage cans at the end of your beach day,” she says.

SOL’s first event gathered around 10 people, but thanks to word of mouth and social media like Facebook and Instagram, between 50 to 75 people now gather at each event. SOL encourages anyone interested in attending the April 22 Earth Day Turtle Tour and Beach Clean Up event to RSVP at [email protected].

Participants will get to see Captain the turtle up close and have the opportunity to feed him breakfast. Researchers will also give a private tour of the newly renovated Carpenter House Education Center, but an RSVP is required for the tour.

Cleanup will start promptly at 9 a.m. and the presentation will be at 10 a.m. This will be SOL’s last event before summer vacation. Bring a reusable water bottle and sunblock.

What would Joey like to tell other young people looking to help make a difference?

“If you have a passion for something, go for it! Don’t let anyone get in your way.”