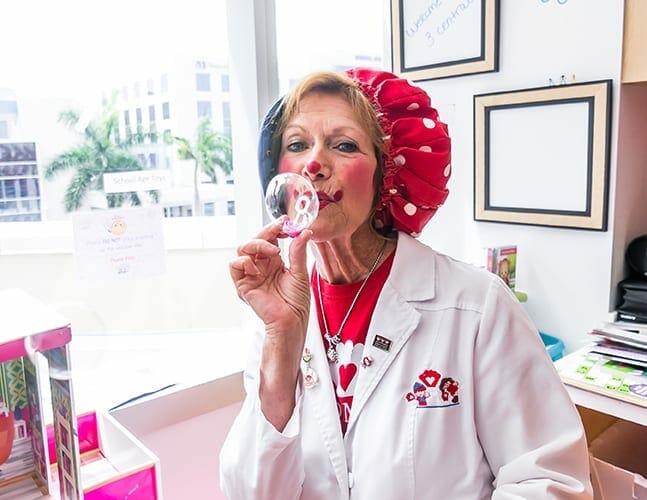 Nine-year-old Bella Rose Olson was born with a condition that meant oral surgery may be in her near future. Bella’s family lives in Downtown Miami but her insurance did not offer an oral surgeon whose qualifications they felt comfortable with.

“I started investigating pediatric oral surgeons in Broward and was fortunate enough to learn of Jason Portnoff,” recalls Bella’s mother Jody Olson. “Portnoff is a fantastic pediatric oral surgeon who had the experience and training I was looking for.” Once they met with Dr. Portnoff, only the choice of where to have the surgery was left.

“I chose Joe DiMaggio Children’s Hospital due to its stellar reputation and because it was a hospital geared towards children,” Olson says.

“What mother would not prefer general anesthesia to be provided by an anesthesiologist who spends their days intubating kids?” Olson asks. “Walking into the hospital for the first time, my first impression was we were in a Disney World park for kids who just happen to be having surgery.”

The Olsons had been to many hospitals but found Joe DiMaggio’s to be in a category of its own.

“We were greeted by happy people who talked to my child respectfully, like they were happy to see her and not like she didn’t exist, as is usually the norm.”

After the ministerial part of check-in, Bella was called in to get ready for surgery.

“We were greeted at the door by a young woman named Nicole who wore a tutu over her nursing scrubs,” recalls Olson. “My daughter and I just looked at each other, smiled and wondered if we were supposed to act like this was normal.” Later on, when they were comfortably situated in their room, and after seeing many other nurses wearing tutus, Olson and her daughter brazenly asked if this was an everyday thing. “We were told it was tutu-Tuesday and learned that each weekday, they celebrated something different,” Olson says.

After changing into her hospital gown, Bella looked out and saw in the center of the floor was a play area filled to the brim with toys, puzzles, stickers and kid-size tables.

“We saw kids in hospital clothes pretend vacuuming and building things,” Olson says. “My daughter asked Nicole if she could go play too.  I was so thankful that she was distracted from the fact she was about to have surgery and that she hadn’t been allowed to eat a thing since last night due to the impending anesthesia.  Whatever person designed this had to be a genius!”

Bella prepped and ready for surgery

“Then,” Olson recalls, “as the kids were playing, a most magical thing happened. A beautiful clown appeared who we came to know was Lotsy Dotsy.”

Lotsy Dotsy has been the resident clown at Joe DiMaggio’s for almost 22 years, and is known as Chief of Clown Services.

A neighbor told her she should be called Lotsy Dotsy with all the dots she wore. And then she saw an ad about clowning.

“I didn’t like clowns as a kid but took the  course,” Lotsy says. “I came to Joe DiMaggio’s in 1992 and we just had so much fun with bubbles, magic, hugging and singing. I felt so blessed and so privileged that they chose to take a chance on me. I’m a respiratory therapist who took a clown course and loved what happened from the day I walked into the building.”

Olson shares that Bella had told Lotsy Dotsy that she loved her crazy socks, and Lotsy said she’d be right back. “With brand-new crazy socks with tags on them for all the kids in the area.  She was so outstanding and loving,” Olson says.

Lotsy says taking care of the whole family builds the trust, security, warmth and service necessary to help make the children and families feel better for just a little while.

As a mom, I was both appreciative and intrigued,” Olson says. “A hospital having a clown on staff really blew me away. I learned she was there for over 30 years, at first part-time, and the hospital received such good feedback from the kids, many of them so ill it was the only time they smiled or had something to look forward to, that she was kept on indefinitely and transitioned to full time.”

Then, just before Bella’s surgery, the anesthesiologist came to visit to introduce himself.

Along Came an Elf

“His name was Dr. Elf,” Olson says. “He told jokes so bad they were funny.  When I asked what his real name was, he showed me his ID. It said ‘Dr. Elf’ and swore it was true. He was so kind.”

Olson got to speak with Dr. Elf as long as she needed to. “It was strange, you’re lucky if a physician does a drive-by to introduce themselves. This doc shared how he wanted to work there because he so enjoyed children and it showed.”

“Since opening our doors in 1992, Joe DiMaggio’s has been focused and committed to the care of our patients and families,” Chantal Leconte, administrator and CEO a Joe DiMaggio Children’s Hospital and Pediatric Services Memorial Healthcare System. “Our philosophy of patient and family centered care means that families and healthcare professionals are true partners working together to serve the best interest of the patient.”

Their extraordinary efforts have been recognized. Joe DiMaggio’s is the first and only children’s hospital in the world to achieve The Planetree Designation – the only award that recognizes excellence in person-centeredness across the continuum of care.  It is also one of the largest public healthcare systems in the country, combining advanced technology and the expertise of the largest, most diverse group of board-certified pediatric specialists in the region.

“Bottom line, this hospital is from another world,” Olson says. “They even have a child’s voice in the elevator announcing the floors!  They don’t miss a trick.  My daughter was given a craft set to take home and play with while she recuperated. I cannot say enough about this place, they just think of everything.”